Dogecoin has been trading in a range for the past six months. The use of a long-term indicator, which predicted the majority of the previous upward moves, suggests that a new cycle will begin by the end of the year.

Dogecoin has made several failed breakouts — most notably on July 7 and October 14. However, the ensuing upward move could be the catalyst to the beginning of a new cycle for both DOGE and the altcoin market.

Cryptocurrency analyst and trader @thecryptocactus stated that the DOGE price has been trading inside a range while gradually moving upwards for the past two months. He believes we will soon move towards 35 satoshis.

$DOGE slowly has been ticking upwards for the past 60 days, now above this 28 sat level which has been a pretty strong level for price action throughout its entire cycle….

Now looking to have flipped this level into support and thinking we could see a run up towards 35 soon. pic.twitter.com/sef6XFy983

In order to predict when upward cycles occur for DOGE, we can use sine lines. Until now, they have been successful in predicting six of the previous eight upward moves. The price skipped one in 2016, which eventually lead to the biggest upward move until now.

Interestingly enough, the Dogecoin price skipped another sine line in April 2019. Will this lead to another all-time high? 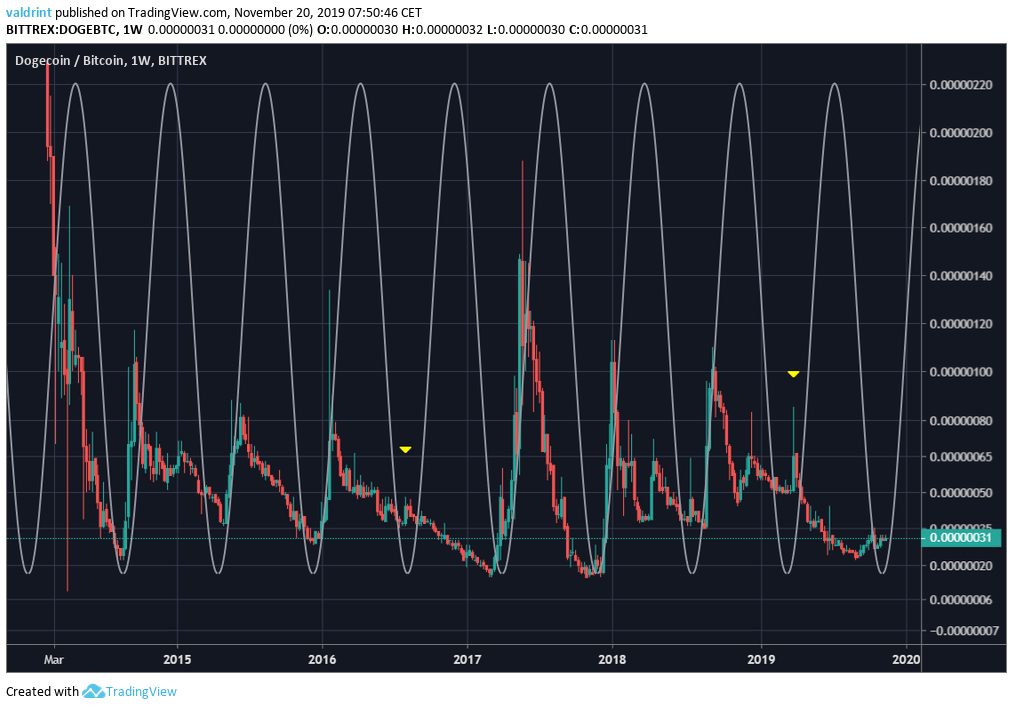 There are some similarities between the bottoms succeeding the skipped sine line.

Besides their proximity to the next line, both bottoms were combined with RSI values. In the first bottom more so than the second, there was some bullish divergence prior to the upward move. 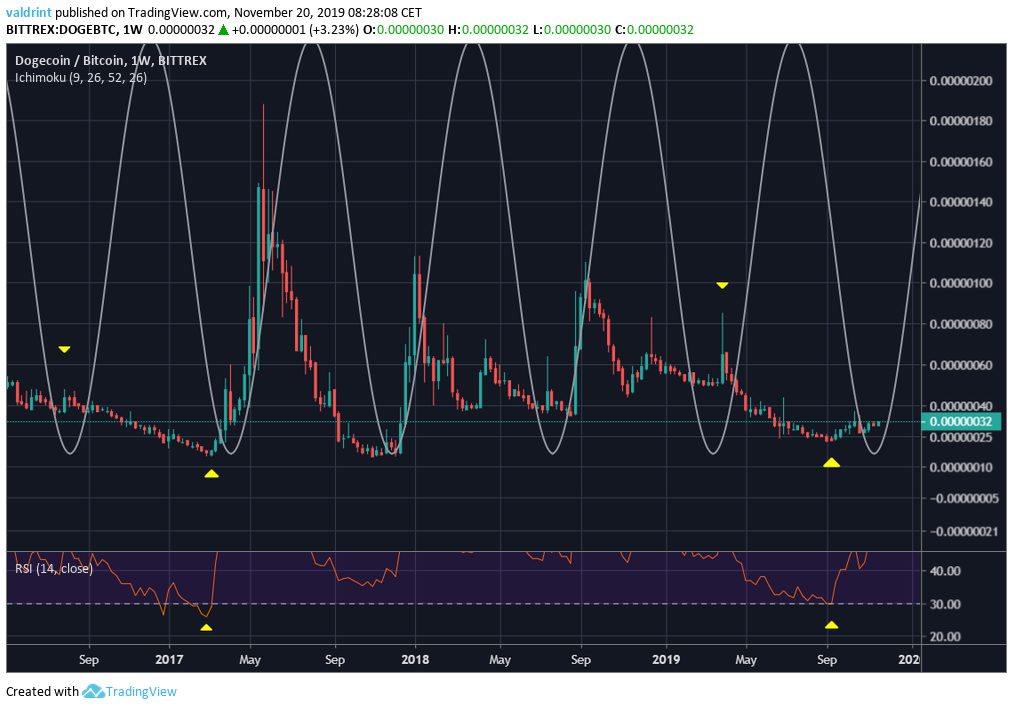 Furthermore, we can see descending resistance lines in place for roughly eight months in both movements.

As soon as the Dogecoin price broke out in 2017, it initiated the upward move that took it to an eventual high of 188 satoshis.

Once the price breaks out from the current descending resistance line, it is possible that it will do the same. 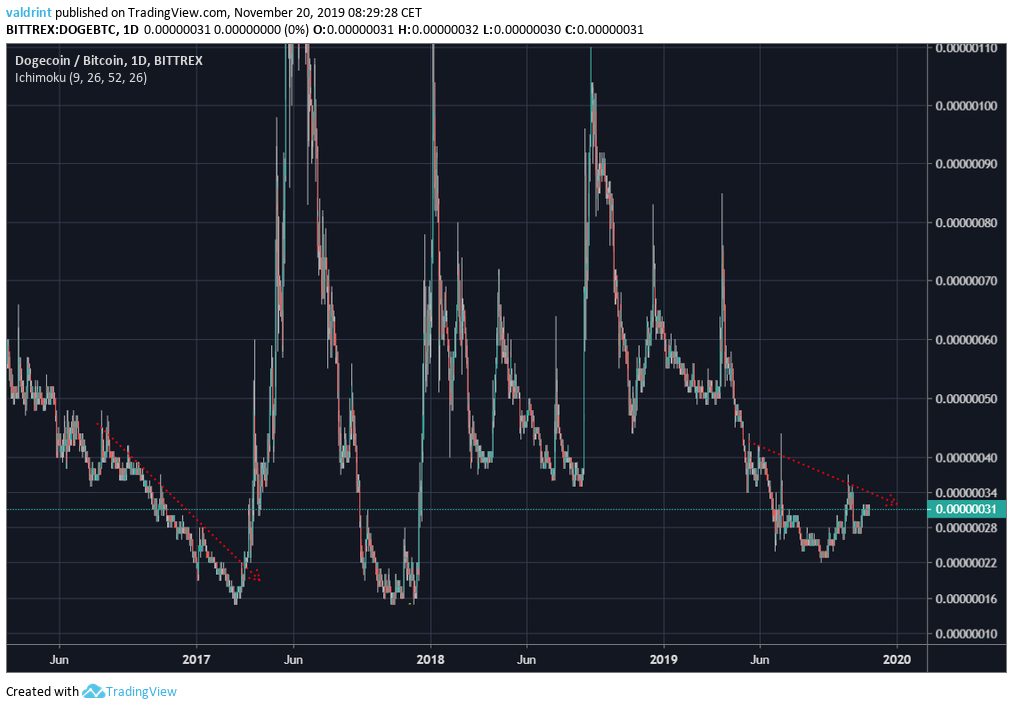 The final bullish indication comes from the possible descending wedge the price has been trading in since May of 2017. A breakout from the wedge would fit with the sine line prediction and should occur by the end of the year.

Even if the Dogecoin price does not reach an all-time high, a move to the resistance area of 105 satoshis seems likely. 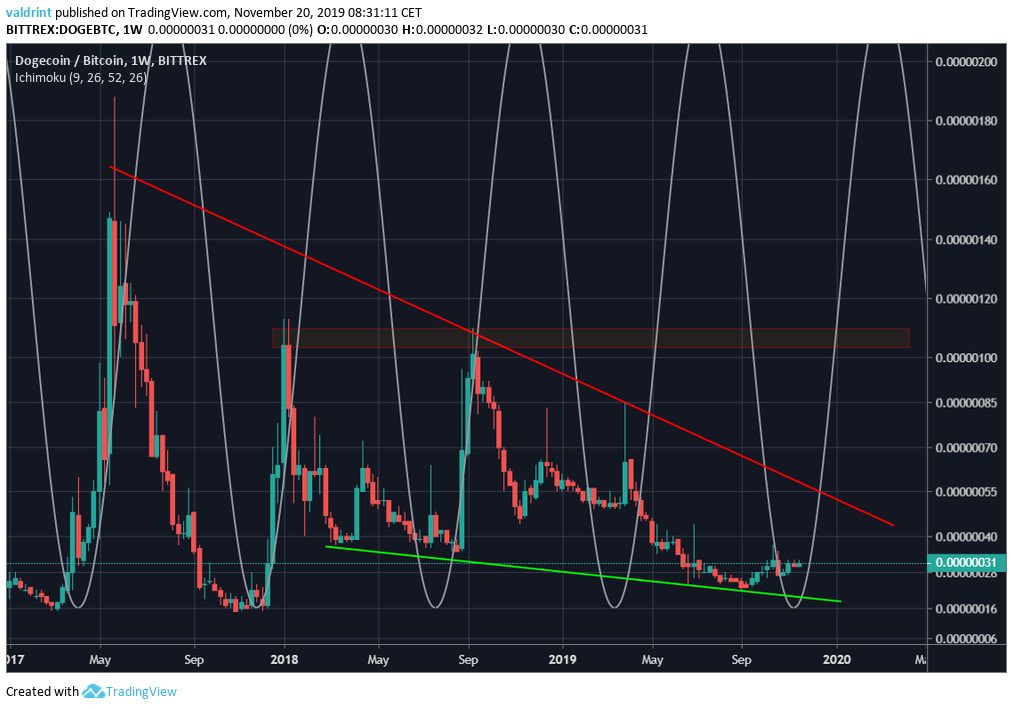