Dogecoin and Basic Attention Token Competing for a Breakout (DOGE, BAT Analysis: May 15)

BUY NOW (BAT) have both seen better days. DOGE broke down from its support line earlier this month. Similarly, BAT has also been going down though it has yet to breakdown.

Are things about to turn around for these two cryptocurrencies? Both have experienced gains in the last few days and appear poised to rise higher. However, they may simply be following Bitcoin

BUY NOW—which recently spiked to over $8000.

In this analysis, we analyze the current short and medium-term movements of DOGE/BTC and BAT/BTC alongside an assessment of their technical indicators. We do this in order to see if any profitable trade setups emerge.

In conclusion, we summarize our findings and compare both cryptocurrencies to see which has more potential for higher prices in the future.

You can read our previous BAT and DOGE analysis here.

An attempted recovery brought DOGE to a high of 83 satoshis on Dec 17. Over the next several months, the price dropped again. Lows below 50 satoshis were reached in March and April 2019.

At the beginning of May, the price of DOGE dropped below 45 satoshis. This movement caused Dogecoin to breakdown from the horizontal support line traced below: 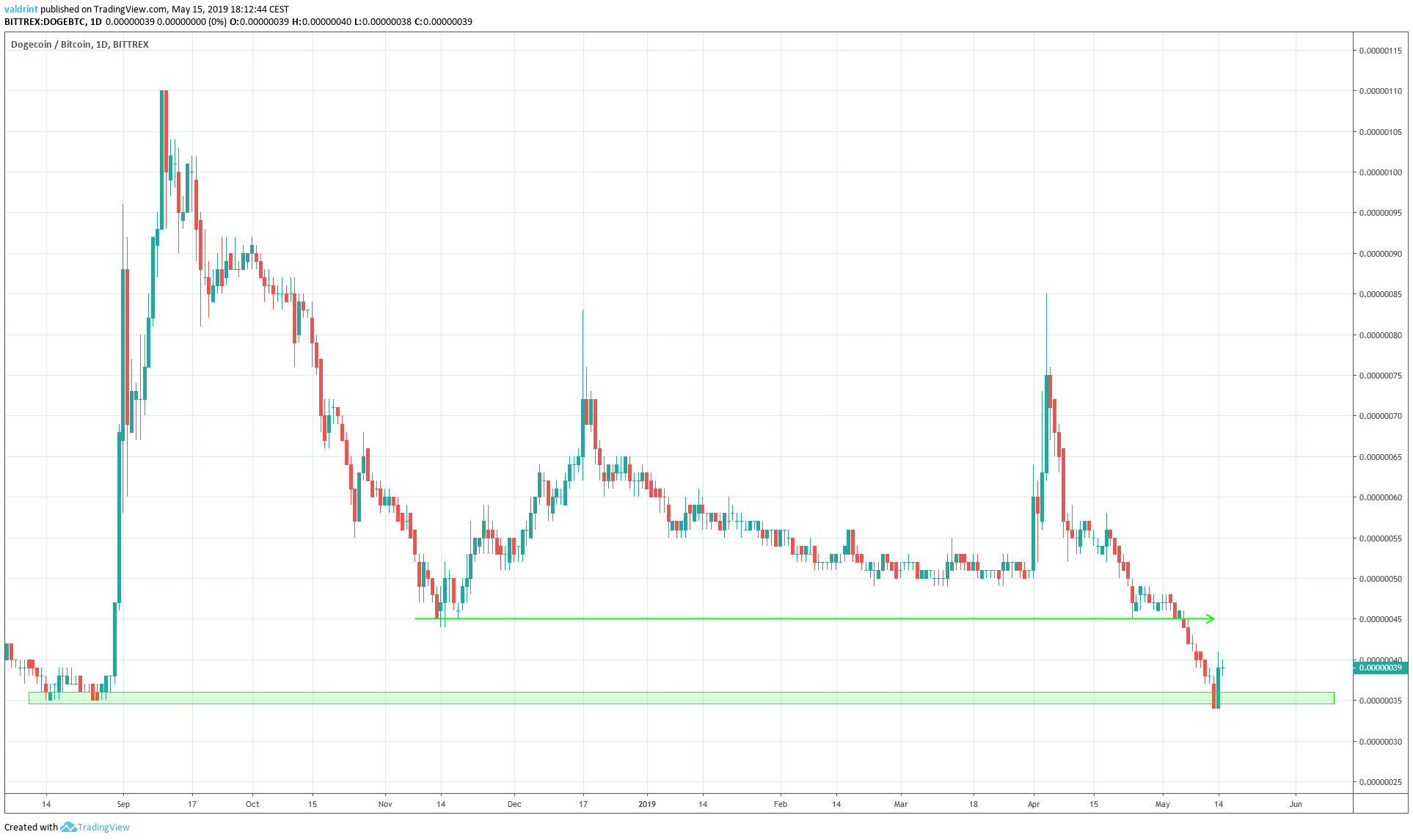 It appears that DOGE has now initiated an upward move. On May 15, the price pushed past 40 satoshis.

On the other hand, BAT/BTC has been following an apparent ascending support line. At the current time, it is trading well above this line. It is possible that the price will drop and validate the support line, which is currently around 3600 satoshis: 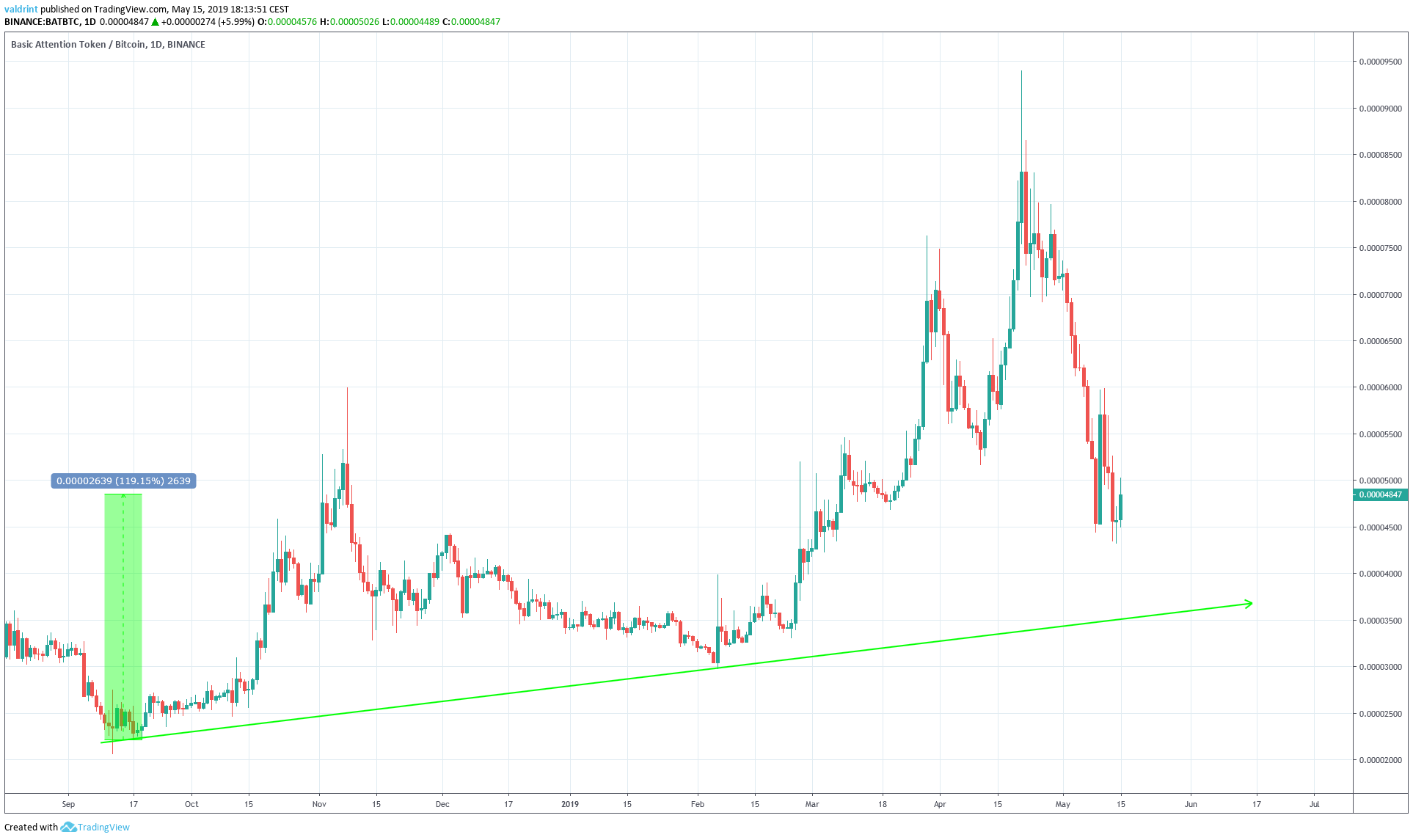 Since the support line formed, the price of BAT has increased by 107%.

Neither BAT nor DOGE appear to have generated a visible resistance line. Thus, no apparent trading pattern can be traced for either.

DOGE Trading Inside a Descending Wedge

On Apr 8, the price of DOGE made a low of 52 satoshis. Over the next few days, the price gradually rose. A high of 58 satoshis was reached on Apr 18. 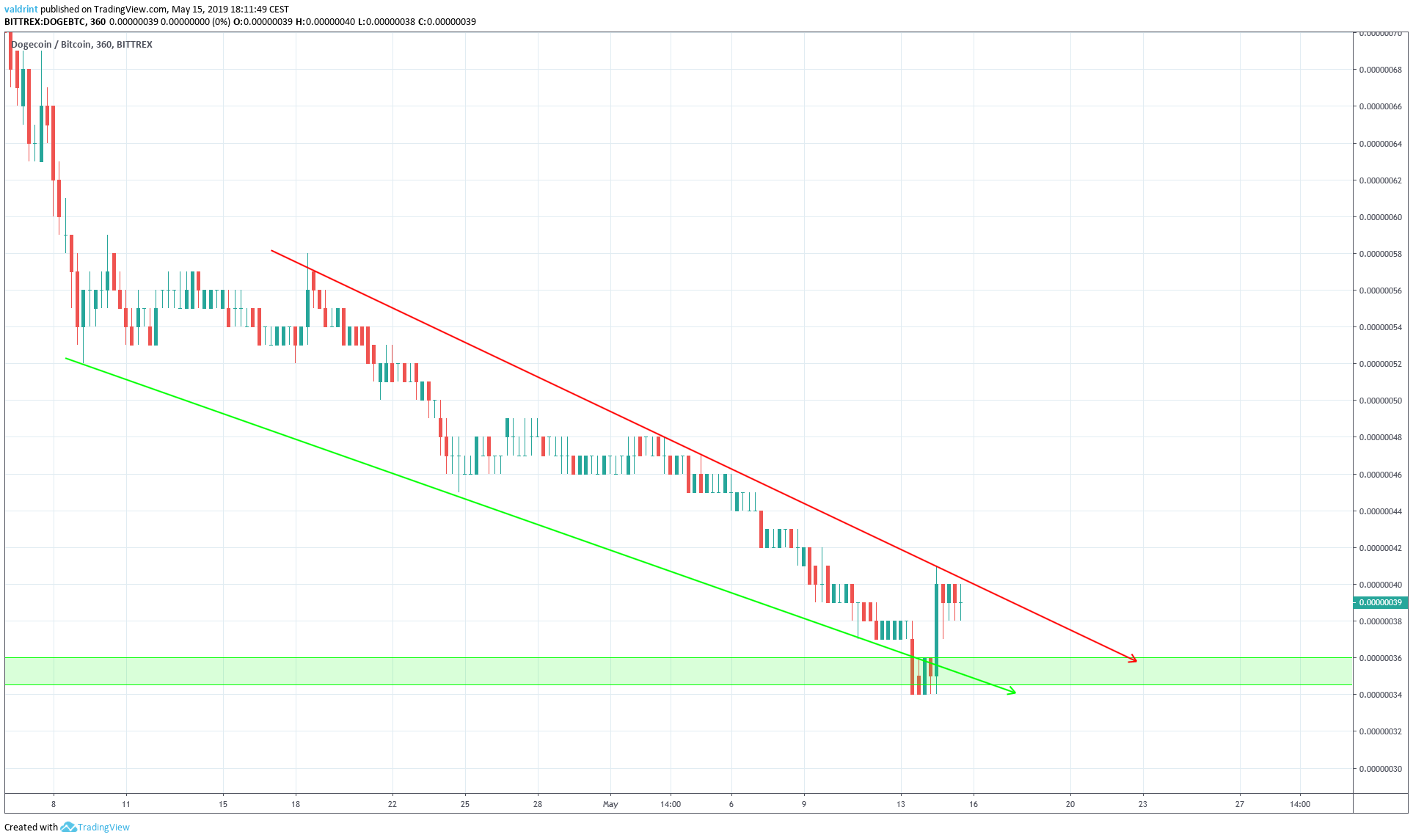 The price reached the major support area on May 13, before beginning an upward move. At the time of writing, it was trading at the resistance line of the wedge.

Because the descending wedge is a bullish pattern, a breakout is technically more likely than a breakdown.

To better assess this possibility, the price of DOGE is analyzed at 6-hour intervals alongside the RSI  below: 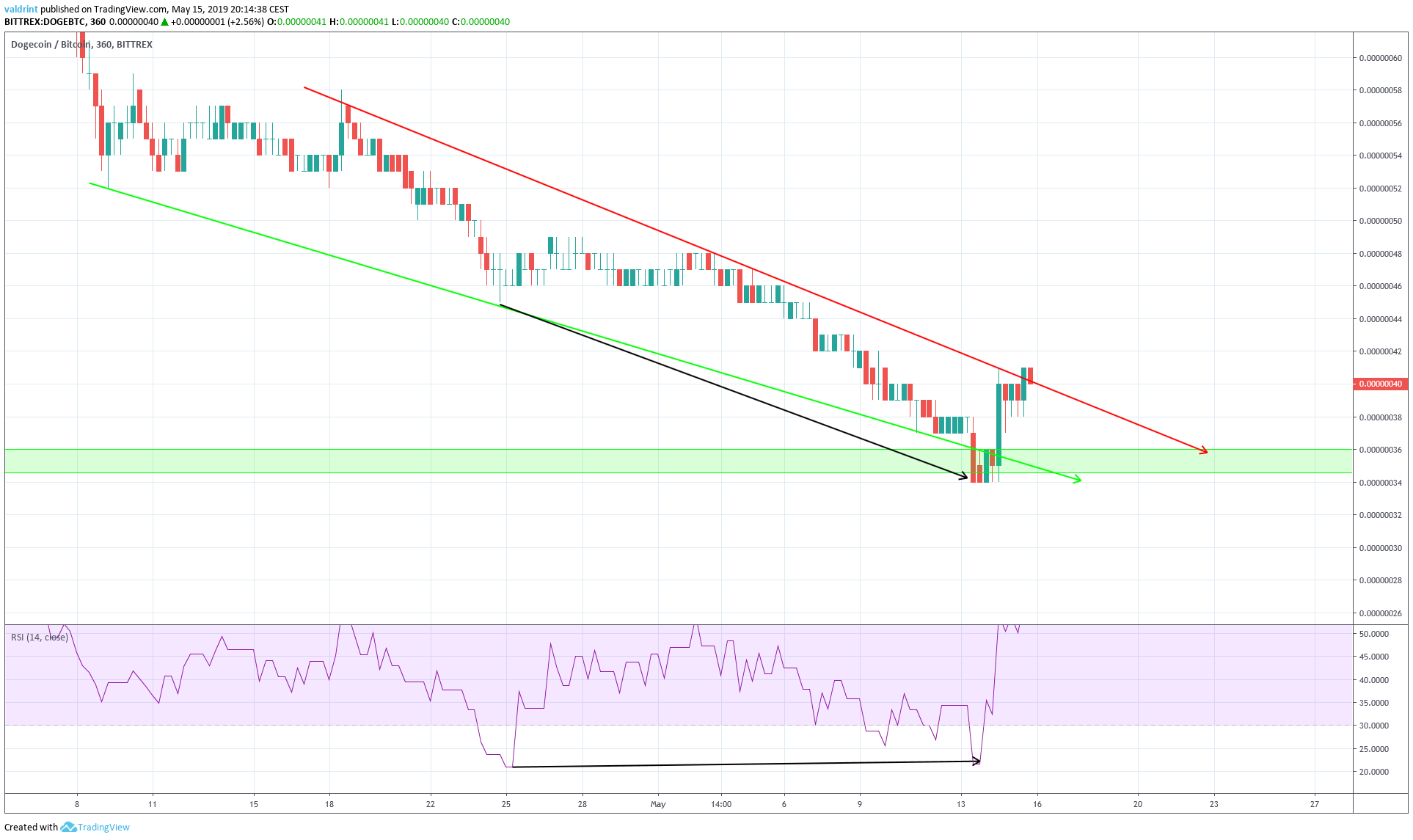 On Apr 25 the price reached a low of 45 satoshis. A decrease ensued and a lower low of 34 satoshis was reached on May 13.

Similarly, the RSI made a low on Apr 25. However, it has continued to generate higher values since.

Last week, we initiated a long trade. Now let’s see how it has fared.

In last week’s analysis of DOGE, we initiated a trade with an entry of 35 satoshis, stop loss of 33 satoshis and a target of 49 satoshis.

This is shown in the graph below:

Since then, the price has increased, reaching levels of 41 satoshis. We still believe that the price will reach 49 satoshis.

The price movements since we initiated our trade are shown below: 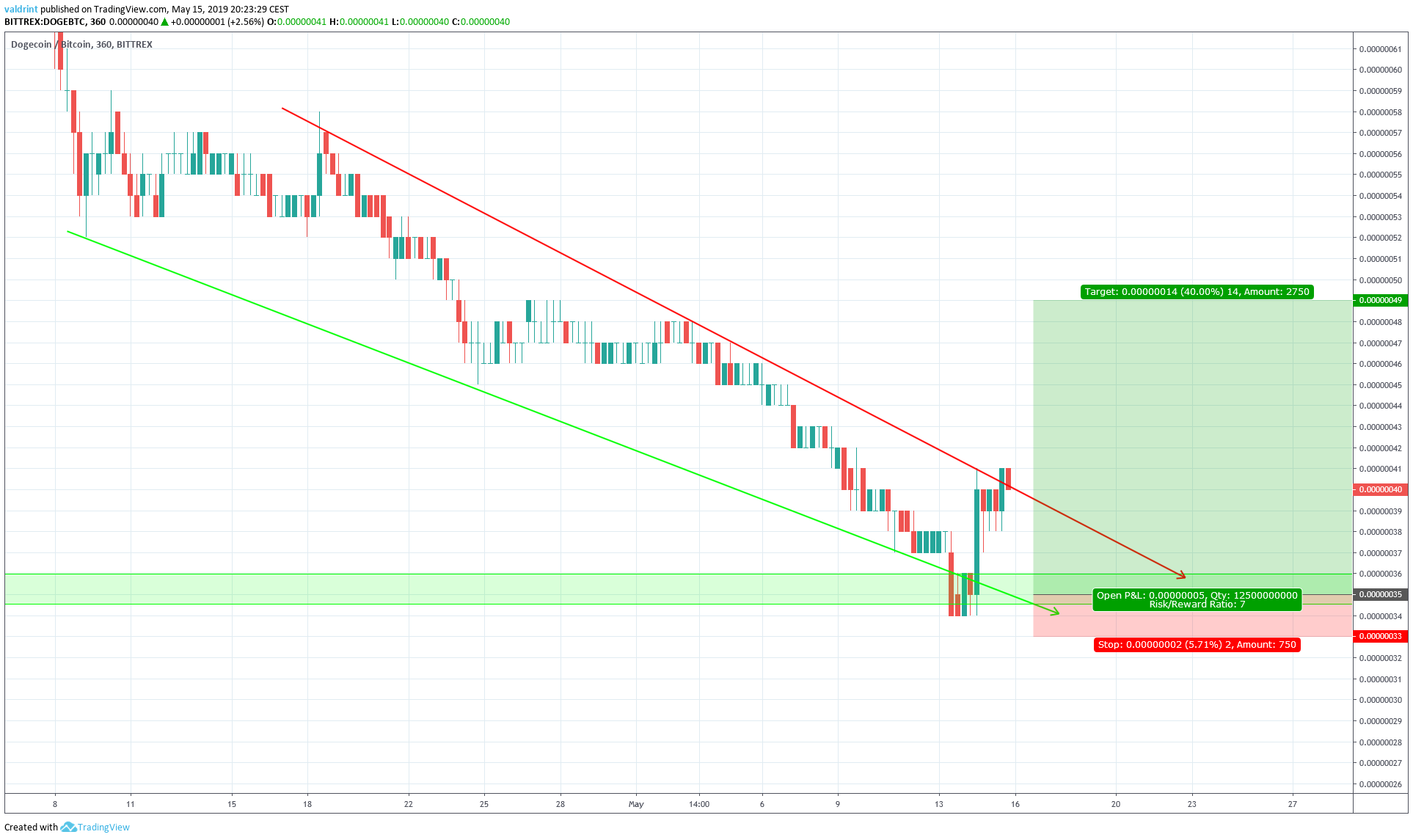 We will assess this trade in our next analysis.

BAT Is Also Inside a Descending Wedge

The support and resistance lines combine to create a descending wedge which is outlined in the graph below: 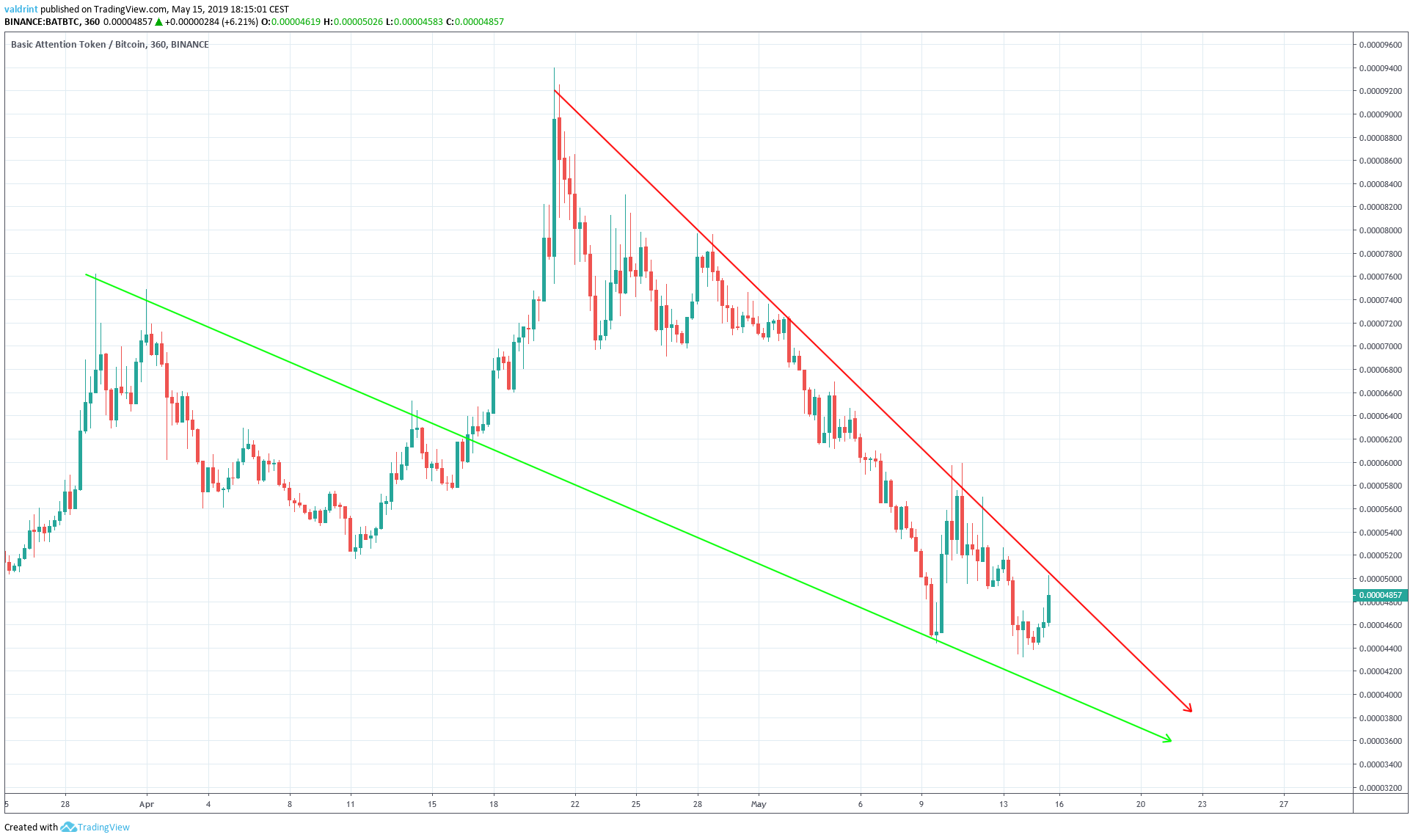 Following May 8’s low, a rapid spike brought BAT to validate the resistance line several times. A gradual decrease has been occurring since.

To better assess whether the price will continue to decrease, we will now analyze the price at four-hour intervals alongside the RSI (MA) below: 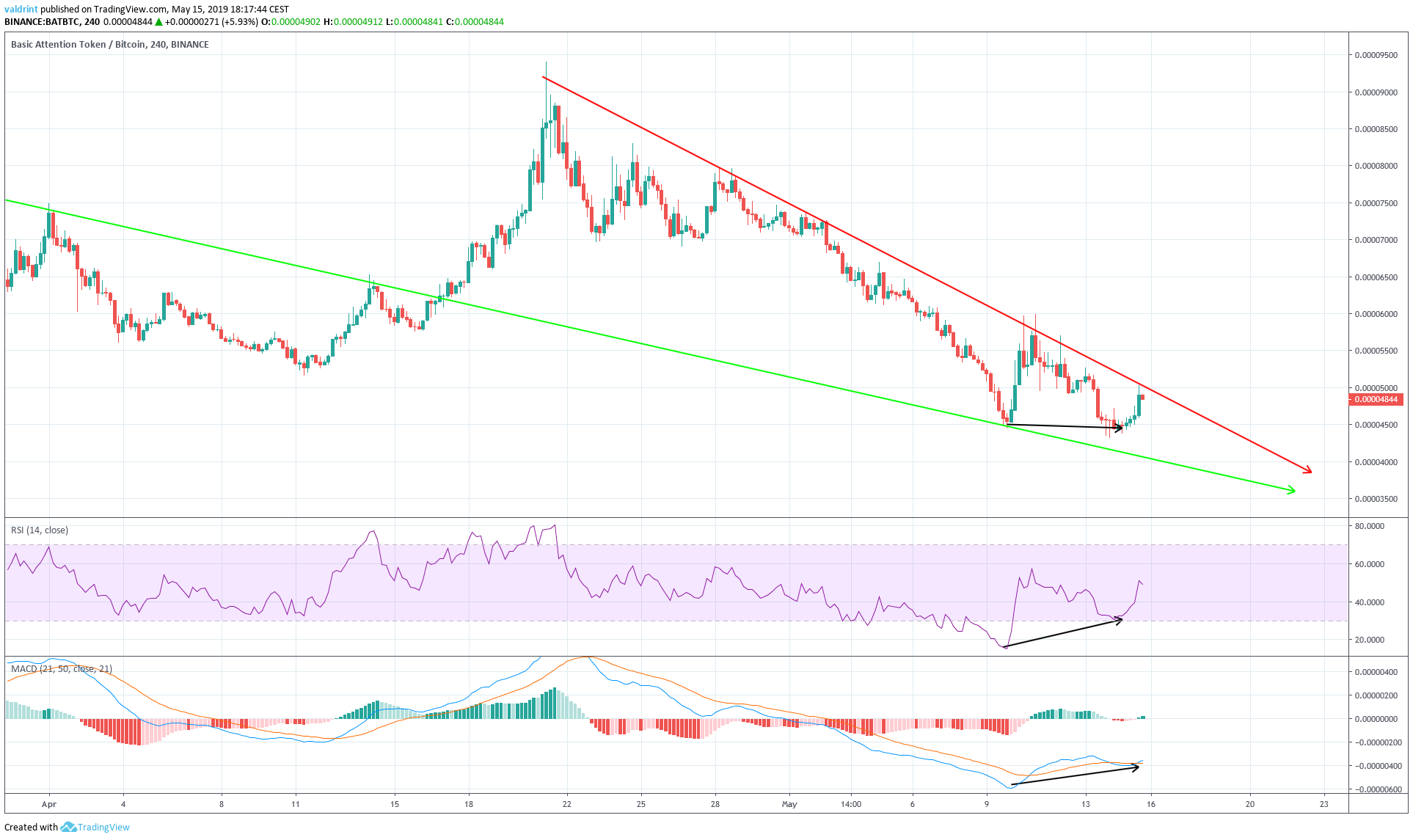 On May 9, the price reached a low of 4438 satoshis. It continued to decrease and on May 13 reached another low of 4317 satoshis.

Similarly, the RSI and the MACD made the first low on May 9. However, they have continued to generate higher values since.

This is known as bullish divergence and often precedes price increases. Furthermore, the descending wedge is a bullish pattern, making a breakout likely.

Therefore, we will assess the viability of our short trade which we initiated

“A possible trade setup is analyzed with an average entry of 5750 satoshis. The stop-loss is placed well above the resistance line and slightly above the May 6 highs at 6150 satoshis. Our target is set at the support line of the wedge at 3700 satoshis.”

This is shown in the graph below:

The price has not yet reached our target of 3700 satoshis. Rather, it has made a bottom around 4300 satoshis.

The presence of bullish divergence inside a bullish pattern makes us believe that the price will eventually break out from the wedge.

Therefore, we have decided to close this trade. Since the price is currently around 4400 satoshis, this is a profit of around 10%.

To conclude, both DOGE and BAT are currently trading inside descending wedges. Furthermore, both have developed significant bullish divergence. In the case of DOGE, this divergence is present only in the RSI, while it is present in both the RSI and the MACD in the case of BAT.

For DOGE, last week we initiated a long trade setup with a very lucrative 7 to 1 risk to reward ratio. The trade is still in effect.

On the other hand, we had a short trade setup in place for BAT. However, due to recent market developments, we decided to close our trade before the target was reached. The trade was closed with a profit around 10%.

Do you think DOGE and BAT are good investments in the long-term? Let us know your thoughts in the comments below!