Dogecoin and Basic Attention Token Breakout After Significant Losses. Will They Keep Going Up?

BUY NOW and many altcoins have suffered short-term price losses recently. Furthermore, many are experiencing bullish divergence. On the contrary, Dogecoin

BUY NOW (BAT) recently broke out from their respective patterns.

Will they be able to defy the odds and continue rising? 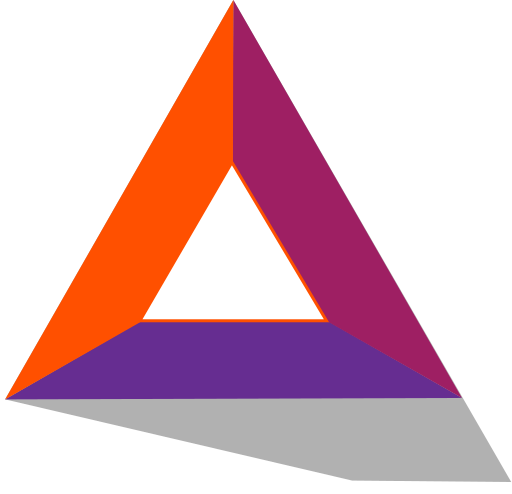 In order to answer this question, we analyze the current short and medium-term movements of DOGE/BTC and BAT/BTC alongside an assessment of their technical indicators. In conclusion, we summarize our findings and compare both cryptocurrencies to see which has more potential for higher prices in the future.

You can read our previous BAT and DOGE analysis HERE!.

A Breakout for Dogecoin (DOGE)

On Apr 9, the price of DOGE made a low of 52 satoshis. Over the next few days, the price gradually rose. A high of 58 satoshis was reached on Apr 18. 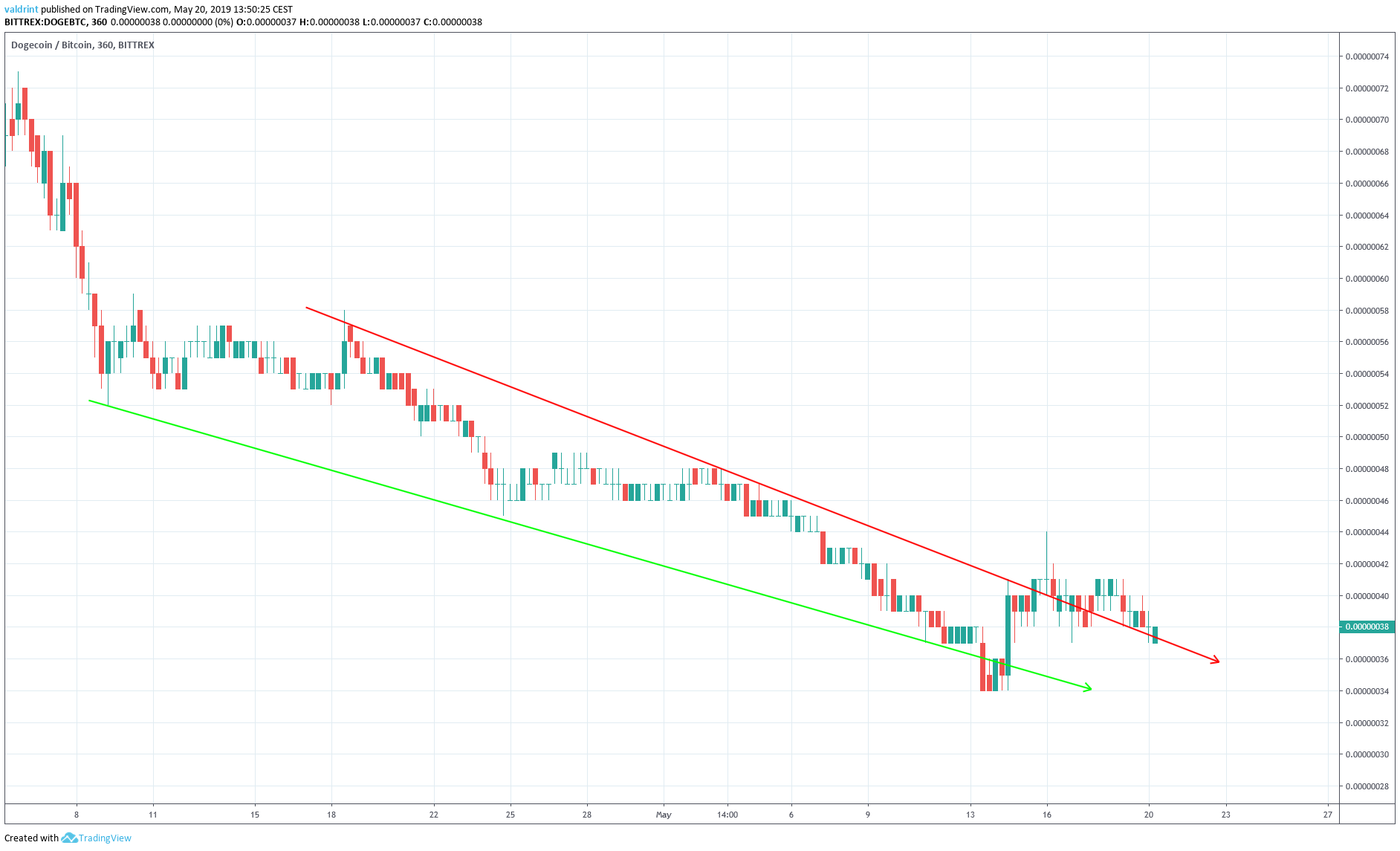 The price broke out from this wedge on May 16. While this breakout may have been legitimate, DOGE could also fall back into the trading pattern and start falling again.

To determine, which is more likely, the price of DOGE is analyzed at six-hour intervals alongside volume and the 100- and 200-period moving averages below: 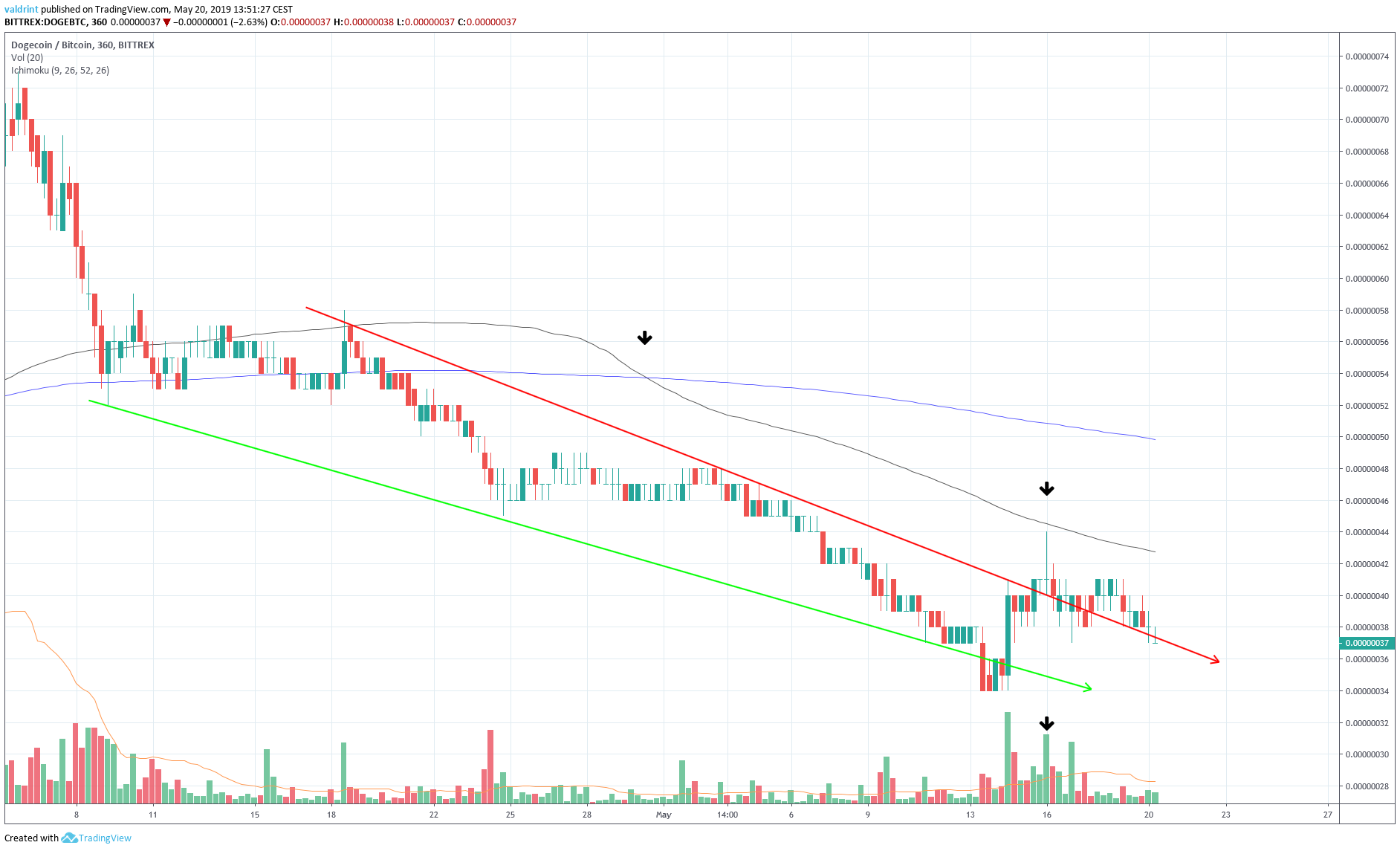 Firstly, the breakout occurred with above-average but not extreme volume. Furthermore, as soon as the price reached the 100-period MA, it began a swift reversal. A very long upper wick emerged.  In addition, a bearish cross emerged when the 100-period MA crossed below the 200-period one on Apr 30.

All of these indicators suggest future price losses. It appears that the breakout may have been false. If so, DOGE should soon drop below the resistance line.

A Look at BAT

On Apr 16, the price of BAT/BTC broke out from a resistance line. It continued rising and reached a high of 9400 satoshis on Apr 20. The price began falling along a new descending resistance line while the former resistance line emerged as support.

BAT has seen substantial losses. A low of 4500 satoshis was reached on May 8 to validate the support line. It rebounded and hit the resistance on May 16.

BAT broke out of the descending wedge the following day: 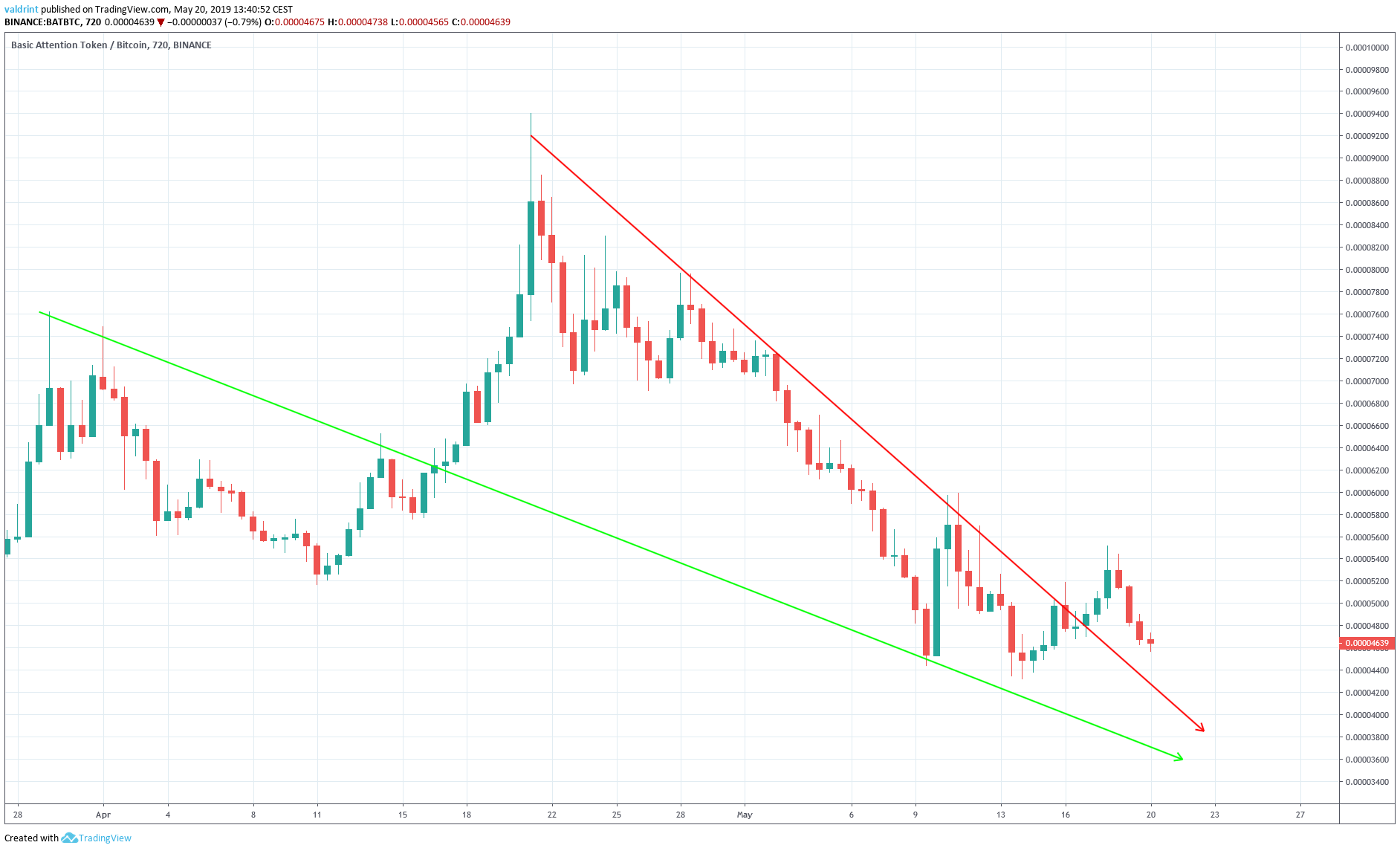 Since then, the price has gradually fallen but is still above the resistance line. It is possible that this resistance line will emerge as new support. However, the price could continue rising or fall back below the line.

In order to determine future price fluctuations, BAT is analyzed at daily intervals alongside the RSI and the 200-day moving average below: 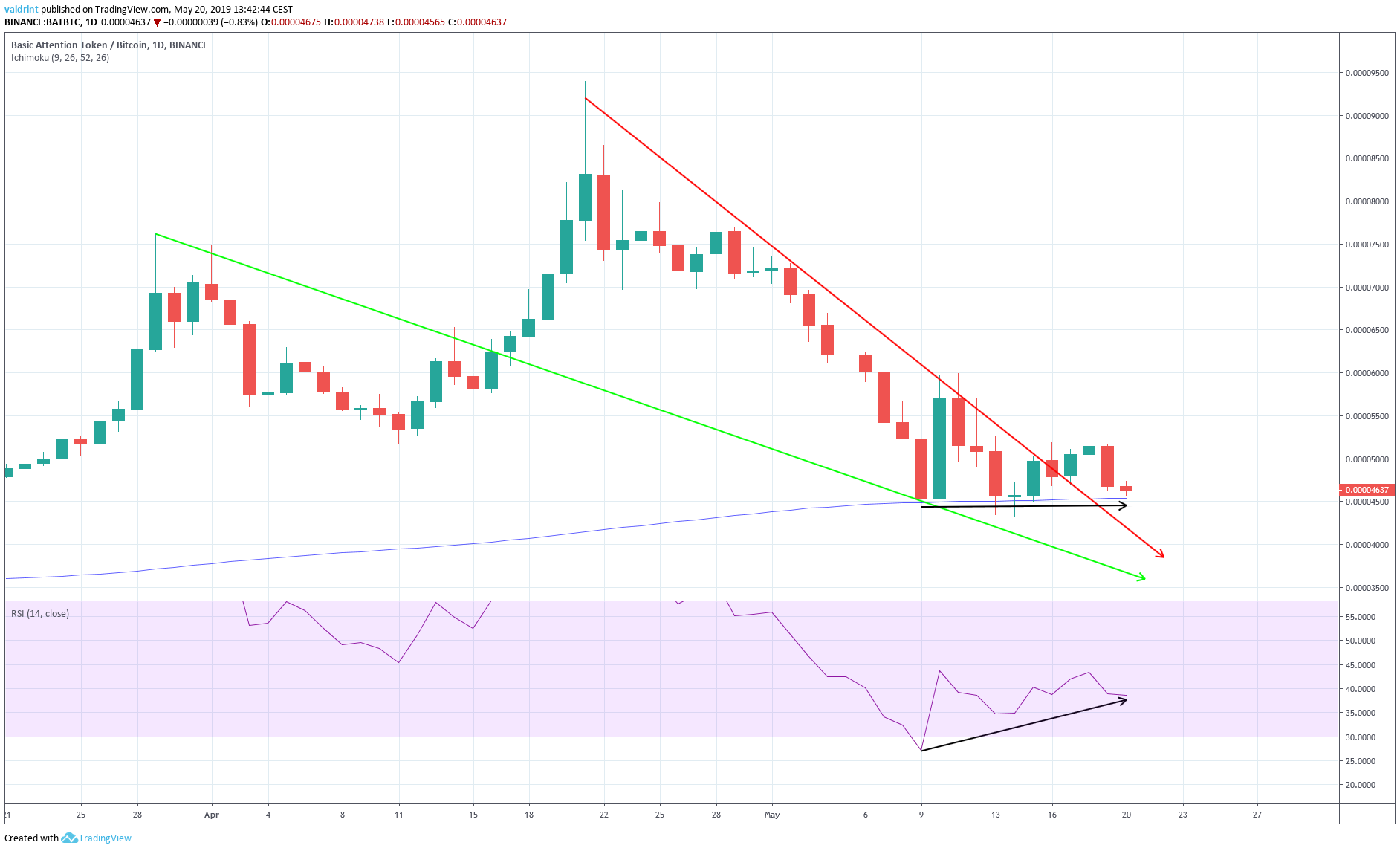 On May 9, the price reached a low of 4438 satoshis. It continued to decrease and on May 13 reached another low of 4317 satoshis. A similar low was reached on May 20. Similarly, the RSI made the first low on May 9. However, it has continued to generate higher values since.

This is known as bullish divergence and often precedes price increases. The divergence, however, preceded the breakout from the wedge which could mean that the price gains are already over. Nonetheless, we can see that the three lows found support above the 200-day moving average.

Thus, unlike DOGE, we believe that the price may continue rising. It is yet unclear if the resistance line will become a new support line.

To conclude, both DOGE and BAT recently broke out from their respective patterns.

In the case of DOGE, the breakout was weak and the price did not break out past the 100-period moving average.

BAT, however, developed significant bullish divergence before the breakout. Furthermore, it has found support above the 200-day moving average.

Thus, we believe that BAT will begin an upward move soon while decreases appear more likely for DOGE.

Do you think the price of DOGE will drop to validate the support line? Will BAT begin an upward move?

Cryptocurrency News Roundup for May 14, 2020
#News 3 weeks ago
Up Next
Tokenization Could Help Achieve a 'Fair' Crude Oil Price
News 1 year ago
Related News

Dogecoin Is the Third-Most Resistant to 51% Attacks, After Bitcoin and Ethereum

Dogecoin Listed on Binance: Is Alt Season Right Around the Corner?

Altcoin News 11 months ago
No Result
View All Result