Along with the rest of the equity markets, the Bitcoin

BUY NOW price has been hit hard as COVID-19 has wreaked havoc on markets around the globe. However, when looking at the Bitcoin performance relative to other assets, some bullish patterns are starting to take place.

One such event is ‘decoupling.’ The Bitcoin price has begun to move in a different direction than the S&P 500, which has gone straight down over the past month. This suggests that Bitcoin could enter a prolonged accumulation phase, but has already reached a bottom.

While there will most likely be less capital for investing in high-risk assets such as Bitcoin, institutional investments are still possible, especially with the possibility of traditional markets closing. This would most likely aid in its recovery.

Furthermore, the third halving is projected to occur by the end of May. Traditionally, the BTC price has gradually increased prior to halving and has accelerated its rate of increase afterward. This event takes on increased importance due to the ongoing massive fiscal stimulus by central banks throughout the globe. This should have a bullish effect on assets with a limited supply such as Bitcoin since fiat currencies are being devalued even more.

It remains to be seen if Bitcoin will ever be the cryptocurrency that everyone ends up using. But, its likelihood of sticking around for the long-term is higher this year than it ever has been.

Since the rapid price breakdown on March 13, BTC has been increasing and trading inside an ascending channel. It has begun to show some signs of weakness, mostly in the form of a double-top, which is considered a bearish pattern.

In addition, there is bearish divergence developing in the RSI, which further increases the chance that the price will break down.

While short-term trading can be stressful, due to the high volatility

We can describe volatility as how much the value of an asset changes over a given time. A volatility index... More and numerous movements such as fakeouts that are near impossible to predict, BeInCrypto has created a telegram group to provide daily discussions about recent price movements as well as educational content intended to help traders of every skill level.

In order to make long-term predictions, we need to make a comparison between the current market cycle and previous ones. There are definite similarities between the downward movement following the $1,177.19 high on November 30, 2013, and the follow-up high of $19,764 high on December 17, 2017. More specifically, the amount of time it took for the price to reach a low and the magnitude of decrease from the high to the low are eerily similar.

Using technical indicators, we can see even more similarities between the two moves:

But, the movement since the low has been nothing alike. After the December 2018 bottom, the price increased by 337% in 196 days. In the 2015 movement, it took the price more than 500 days in order to increase by the same amount.

Another interesting similarity that can be used to make a prediction comes from the retest of the same 200-week MA, which occurred in August 2015 and March 2020. Both times, a long lower-wick was created below the MA before the price proceeded to reach a close above it. Therefore, it is possible that these two lows mark similar points in the market cycle.

In 2019, the touch occurred after 455 days and the price was 72% higher than the previous bottom. This amounts to a daily rate of increase of 0.158%. Both rates are quite similar, so the possibility arises that the March 2020 bottom and August 2015 low represent similar points in the market cycle.

However, the movement in 2020 is unfolding at a much slower rate,  which makes sense, since as the asset matures we would not expect similar volatile swings in rapid fashion to continue taking place. Furthermore, this does not invalidate the extremely similar bottoms of January 2015 and December 2018 but suggests that the movement decelerated afterward. However, the price eventually returned to the mean, which in this case is the 200-week MA.

The actual difference in time periods is 0.49 (224 days/455 days), but for the sake of simplicity we will round it up to 0.5. Both movements had the same rate of daily increase.

Presenting both movements in a lower time-frame, there are definitely some similarities, even if the movements are not identical. However, in the 2015 movement, while the bearish engulfing candlestick caused the price to decrease way below the previous support area, the price was quick in reclaiming it.

The price has to do the same this time around with the support which has now turned to resistance at $6,800 in order to continue with the fractal. If not, the price could decrease further and make a new low. We will discuss this possibility in the ‘Alternate Prediction’ section below. 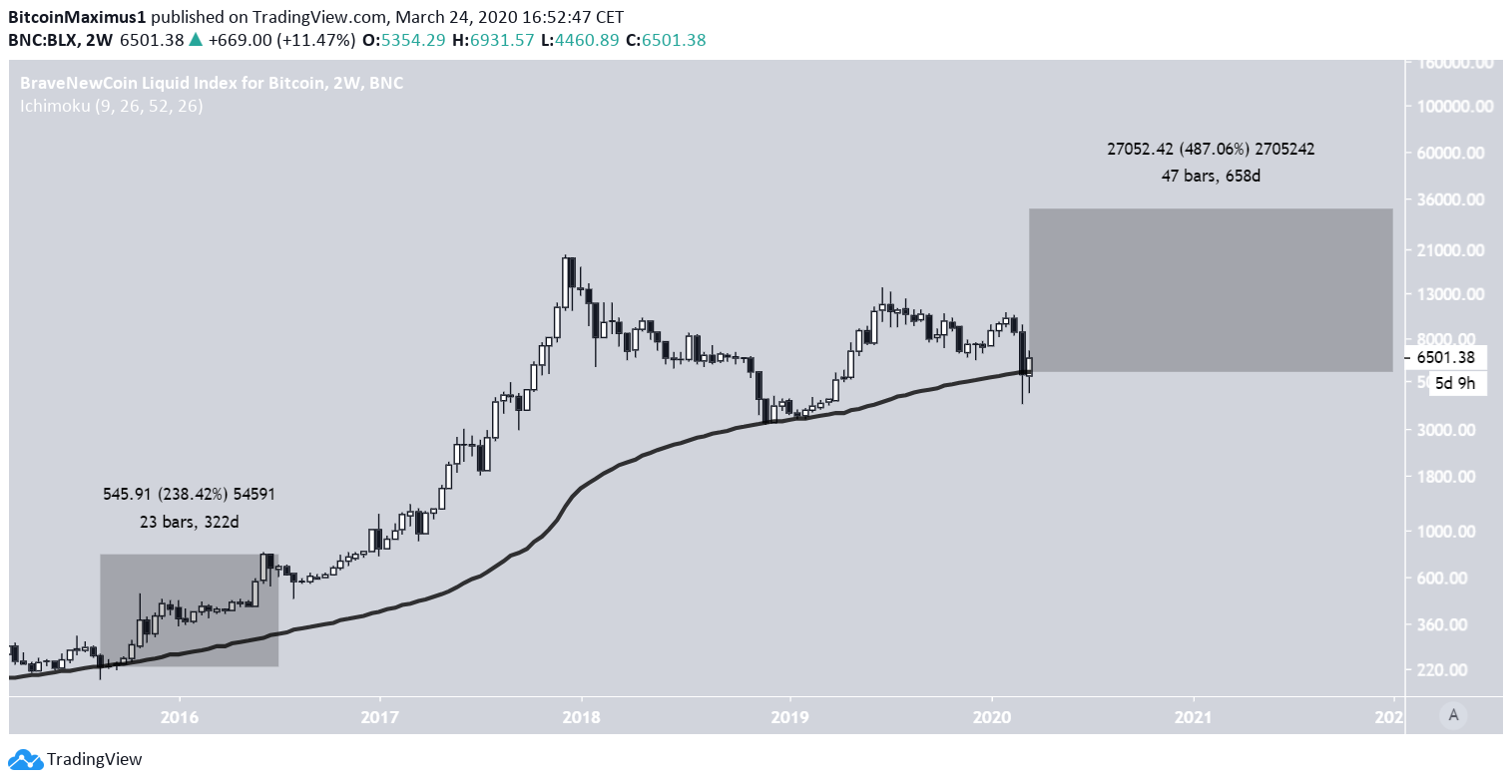 Another less-complicated but less-accurate method to make a prediction would be to look at the rate of increase after the halvings, since the third one is projected to occur in May 2020.

After the second halving, the BTC price increased by 93% in 231 days, which is the number of days from the projected date of the third halving until the last day of 2020.

The issue with this method is that we do not know what the price will be on the halving date. However, considering the 93% increase, a price of $7,500 on halving would give a $14,800 price at the end of the year, fitting with our previous prediction.

A more bearish prediction suggests that the March 13, 2020, low coincides with that in January 2015, instead of that in August 2015. This is not supported by the RSI but is supported by the fact that there was a very long lower-wick that decreased below the MA. Furthermore, the price movement does not completely support this comparison, since the December 2018 bottom is lower than the current one.

This prediction makes the assumption that both the movement and the rate of increase are twice as low in 2020. In this case, the price has yet to begin a bullish trend, since it will make a type of double-bottom, similar to what the price did in August 2015.

We can use the same method we used previously to arrive at the December 2020 prediction. We will still measure the price 151 days after the low in 2015 since the rate of movement is twice slower. However, the total increase will be slightly smaller in 2020, and the bottom in 2015 will be measured from January instead of August.

For December 31, 2020, we arrived at a different price with each method, $14,500 and $8,400 respectively. The principal method suggests the price will continue to increase inside a gradual upward trend and eventually reach $14,500.

The alternate method (dashed), has a similar movement in the beginning, but the price is expected to decrease initially, before bouncing and reaching $8,400.

In our main prediction, the price halts a little at the end of 2020, before continuing its upward trend.

In order to make a prediction for the Bitcoin price five years in advance, we will compare the rate of increase and time periods between each high in the existing market cycles.

Therefore, the second move was 1.68 times slower and 0.46 times as large. Using these ratios for predicting the possible next move, the high will be reached 2,514 days after that in December 2017 and will be 766% higher.

Disclaimer: This article is not trading advice and should not be construed as such. Always consult a trained financial professional before investing in cryptocurrencies, as the market is particularly volatile. Do you think our predictions will be accurate? What are your thoughts on the methods used to reach our conclusions? Let us know in the comments below.

News 10 hours ago
No Result
View All Result