Can We Use the Litecoin Price to Predict That of Bitcoin?
#
Home Analysis Bitcoin Analysis
MACD

Bitcoin Price Analysis: When Will the Downward Move End for BTC/USD? 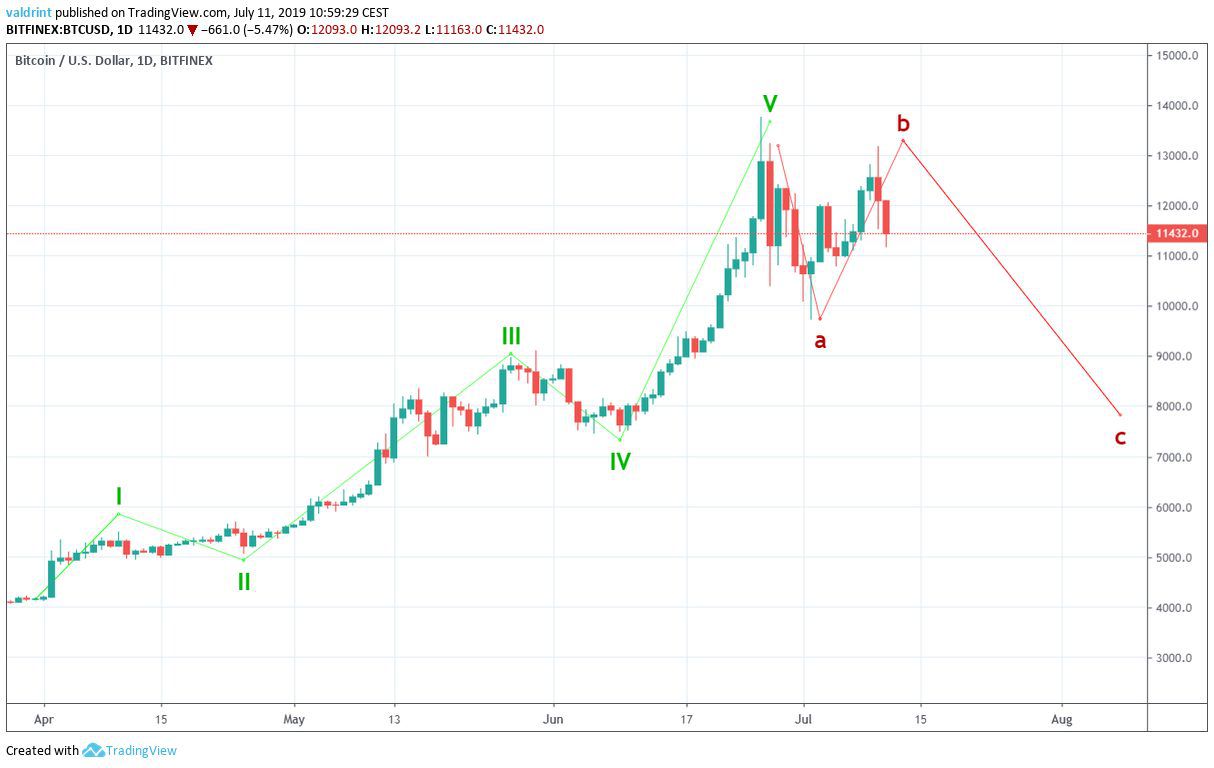 In this article, we are going to analyze the possibility that we just finished a five wave uptrend, and are now in the C wave, which is the final corrective wave before the uptrend continues.

According to Elliot wave theory, a five wave uptrend is followed by an A-B-C correction.

Note: This is an analysis of a possible future correction. For the regular daily analysis, please click here.

If you would like to trade Bitcoin (BTC) safely and securely on our partner exchange, follow this link to get all set up on XCOEX. 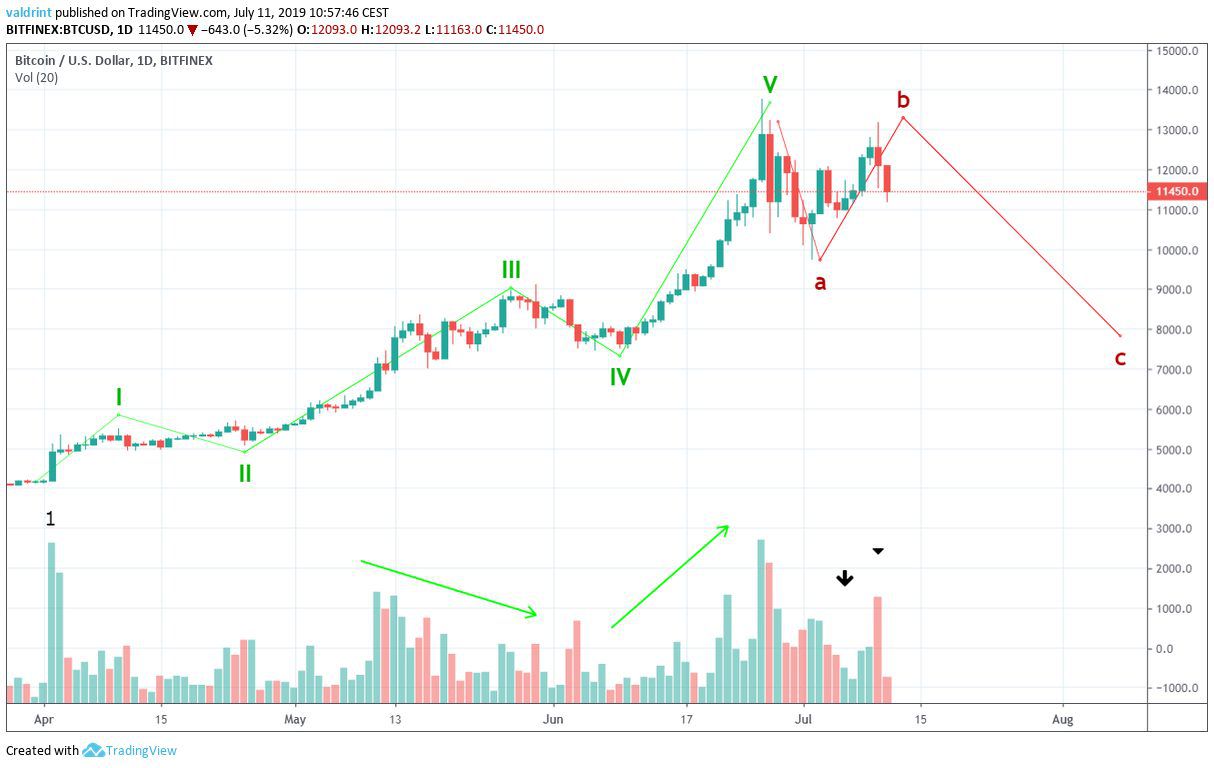 Afterward, during wave three, volume was lower than in the beginning. This is customary in Elliot wave formations.

Volume again picked up during wave five, culminating on June 26, the day in which the top was reached.

After the decrease, volume was significantly lower during wave B. Finally, the decrease which is potentially the beginning of wave C transpired with significant volume.

The BTC price is analyzed alongside the RSI in the first graph and the 10- and 20-day MAs in the second
A look at the three-day RSI shows that there has been a significant bearish divergence developing since the end of May, which marks the end of the wave three. 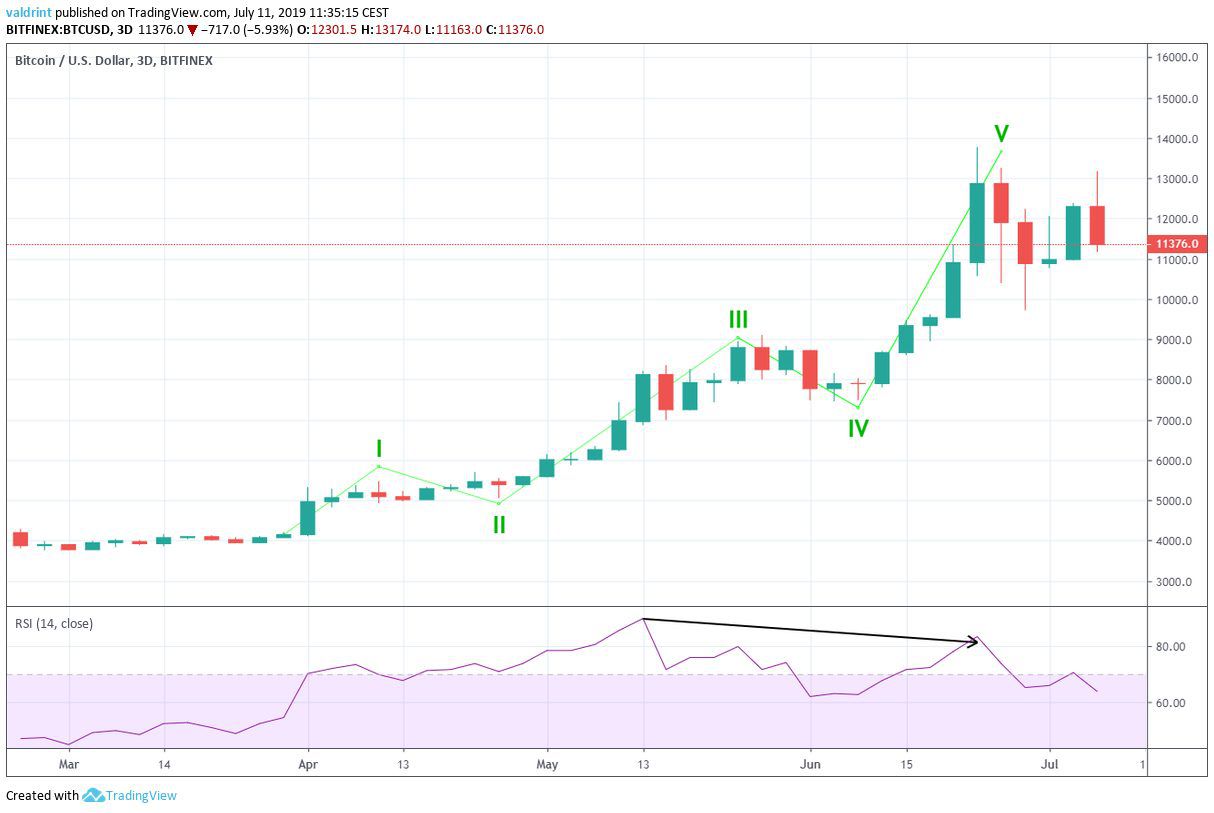 The three-day period is the longest time-frame in which the divergence is present. It is worth mentioning that this divergence is not present in the MACD.

The moving averages (MA), while very close to turning bearish, have not yet done so. 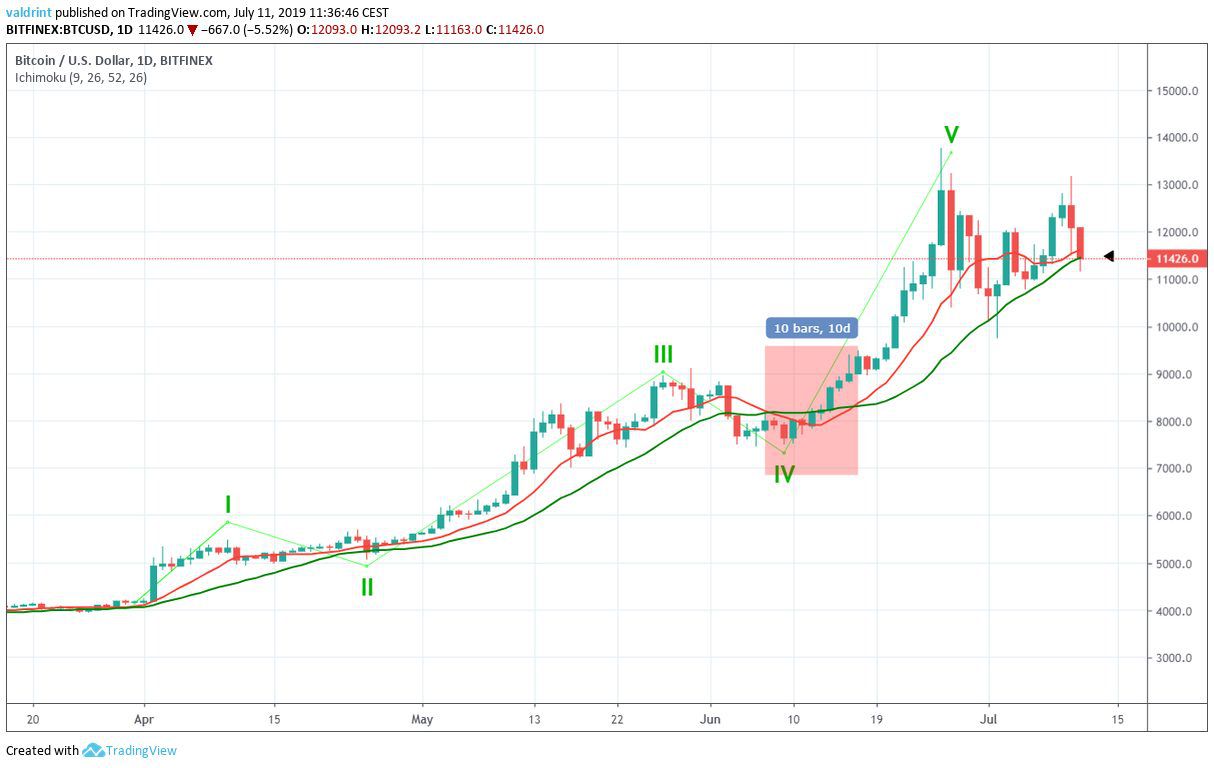 At the time of writing, the Bitcoin price is barely holding on to the support offered by the 10- and 20-day MAs.

However, even if a bearish cross occurs, we cannot rule out a situation similar to the one that transpired on June 7.

At the time, even though a bearish cross occurred, the BTC price began to increase shortly after.

However, it has shown more weakness this time around.

In order to predict the ending of the C wave, we are going to use a Fibonacci retracement tool from the beginning of the upward move on April 2. 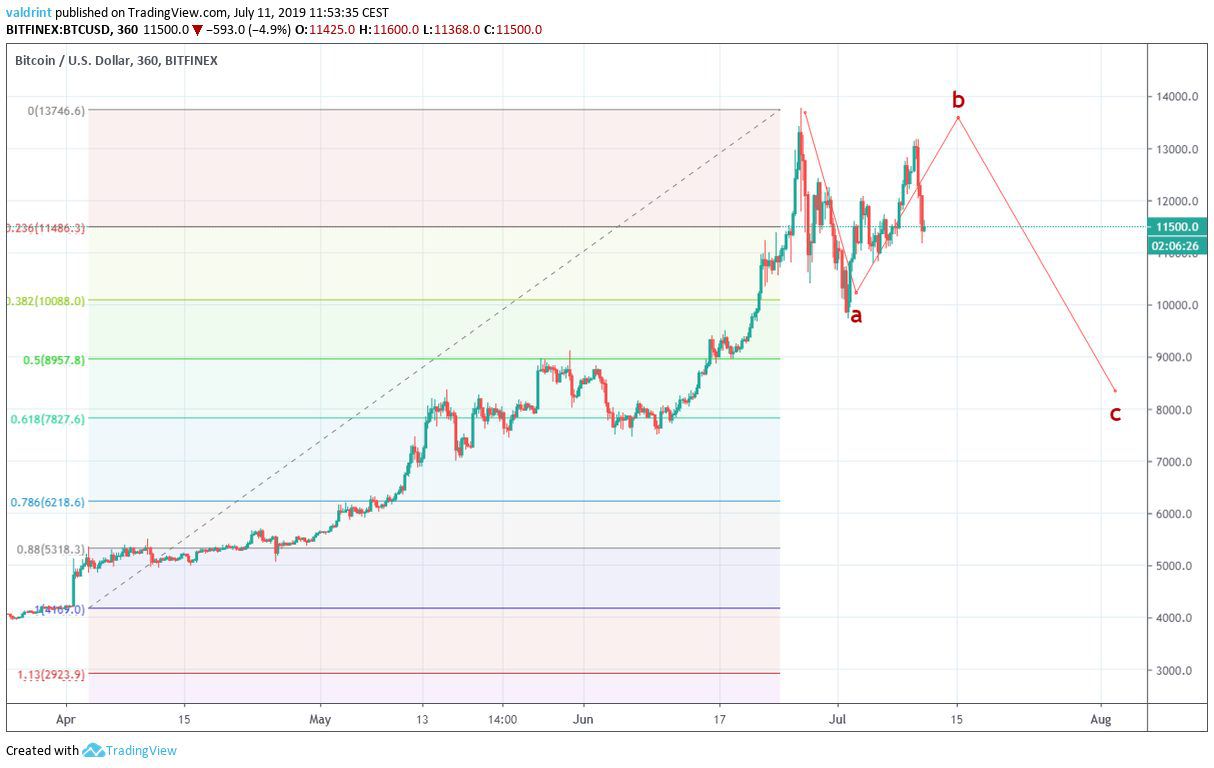 Furthermore, there is significant support around this area due to the price movement at the end of May/ beginning of June.

Currently, we have been on a downtrend for only 15 days. 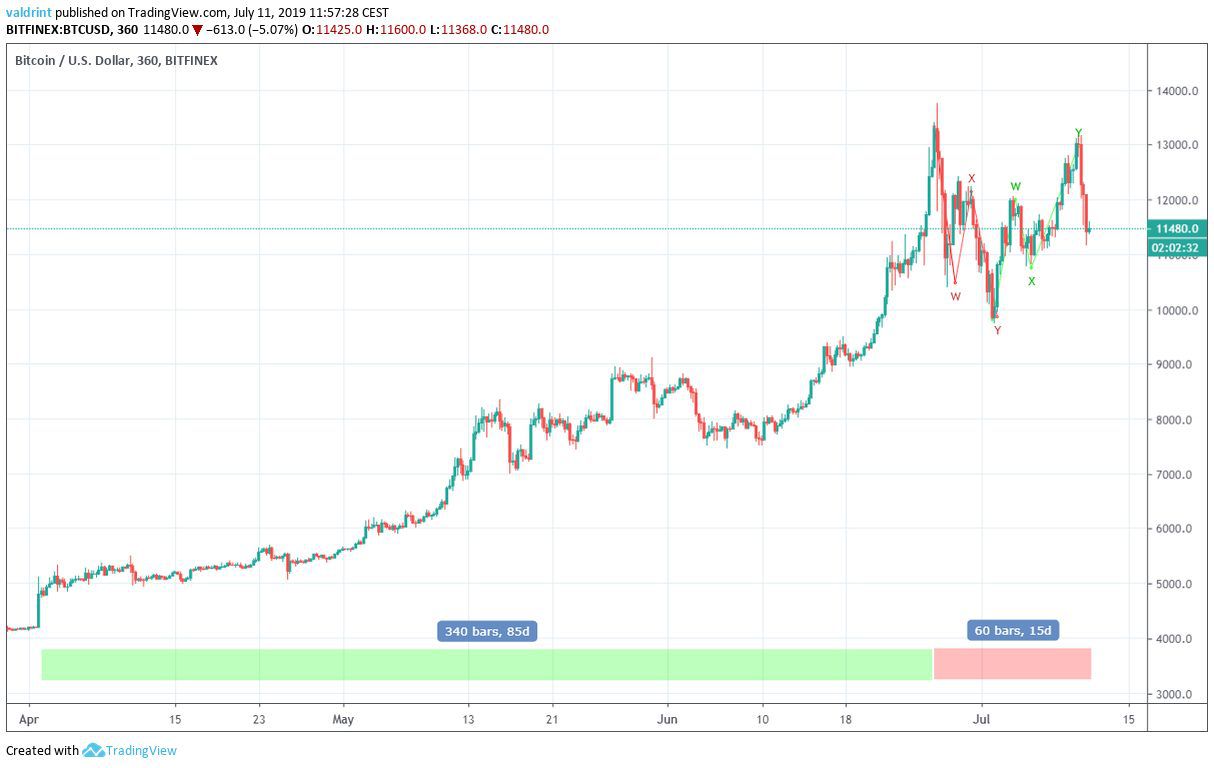 As is visible above, the Bitcoin price has completed both waves of the correction with three smaller sub waves (W-X-Y).

Due to the significant length of the upward move and relatively short correction length, we believe that the final wave will be slightly longer.

Therefore, it is likely that the correction will follow a 3-3-5 subwave count, rather than a 3-3-3.

We have outlined the full subwave count below. 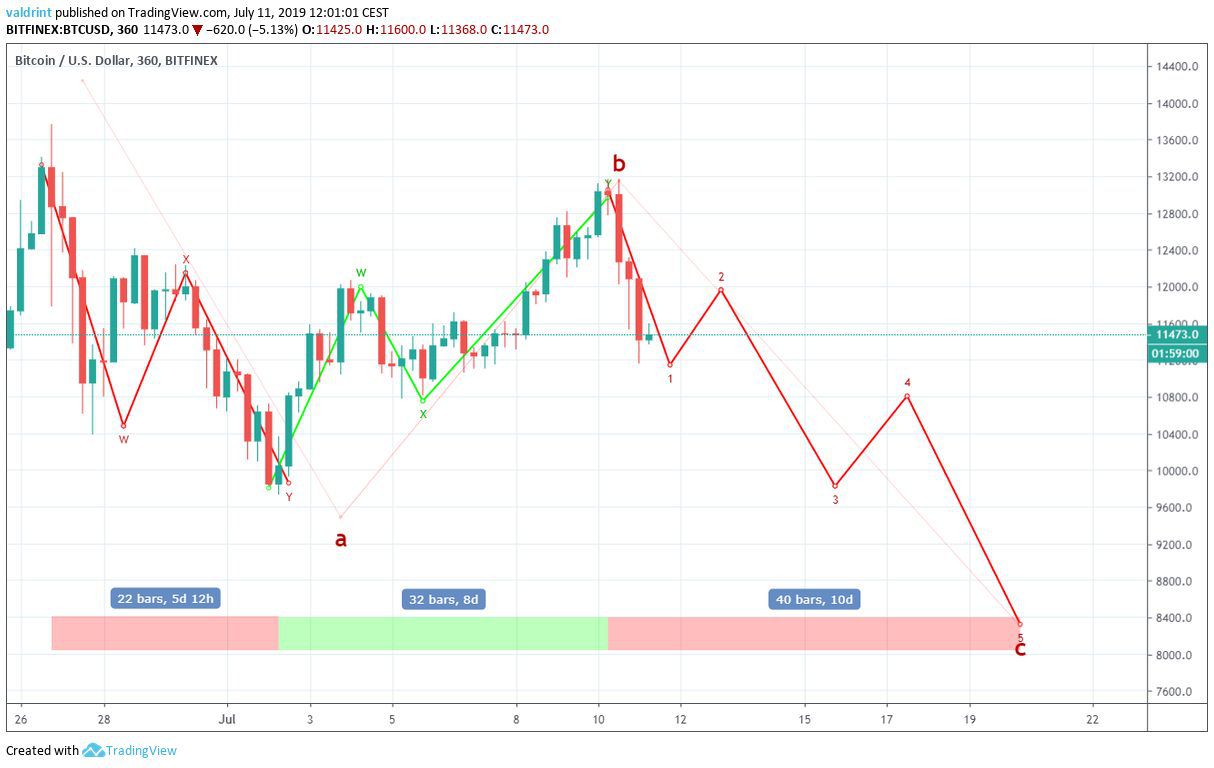 Also, the first downward wave (A) took five and a half days to be completed.

The B-wave was slightly longer, taking eight days to materialize.

Finally, for the C wave, we are making the assumption that it will be even longer, around 10 days.

It should be characterized by rapid decreases and weak upward bounces.

The Bitcoin (BTC) price has been increasing since April

It is likely in the final wave of a correction, which should end around July 20 at $8200.

Where do you think BTC will make a bottom? Let us know in the comments below!