By Colin Adams
14 August 2020, 13:59 GMT+0000
Updated by Ryan Smith
14 August 2020, 14:03 GMT+0000
In Brief
Cryptocurrency derivatives exchange BitMEX has announced that it will be launching a KYC program at the end of August. The news came just weeks after the exchange unveiled a new set of features for its corporate customers.
In a blog post, the exchange noted,

“we will be launching our User Verification Programme at 00:00 UTC on 28 August 2020, where all customers will be asked to complete ID checks within the next six months.”

“these new controls will enable us to create a more trusted and secure trading environment for all BitMEX users.”

The program will necessitate that users go through a four-step process similar to the checks found on other cryptocurrency exchanges. It will also require BitMex to update its homepage where taglines like “sign up takes less than 30 seconds” and “trade in minutes; deposits only require one confirmation” are still displayed. One of the oldest and more controversial crypto trading platforms around, BitMex grew on the basis of easy registration and bitcoin-only account balances. Its announcement of mandatory identity verification checks raised more than a few eyebrows. 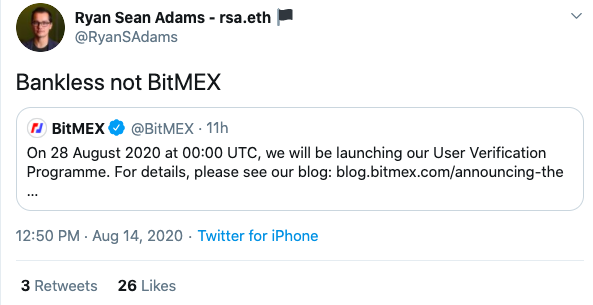 To offset this news and incentivize users to complete the verification, BitMex also announced that it would be holding a trading tournament in the coming weeks. The tournament will allow users who have completed the process to compete for prizes.

This story is one that has played out repeatedly in Bitcoin’s decade of existence. An exchange is launched and promises a service that does not require KYC and AML verification. Then, once it scales, it draws the attention of regulators and buckles under the pressure, ultimately forcing compliance on its users. Naturally, the BitMEX announcement framed things in a positive light,

“today, user identity verification is increasingly expected in order to meet evolving international regulatory standards, and is an important part of building trust in the cryptocurrency ecosystem.”

However, users affected by the new regulations are unlikely to be convinced, with many viewing such programs as blatant privacy violations. Although others may take the more charitable view that this is a way for BitMEX to increase its security and appeal to new customers, it’s likely to be a tough sell. This is especially true in light of previous incidents, like in 2019, when it accidentally leaked user emails.