How Long Will Bitcoin’s Market Cap Dominance Continue to Increase?

The majority of cryptocurrencies have increased significantly in price since their inception. However, the market capitalization of Bitcoin has often been higher than that of all other cryptocurrencies put together.

The lowest ever Bitcoin dominance percentage has been 35%, which was reached in January 2018. Interestingly enough, this was the time when the price of BTC was at an all-time high.

Twitter analyst @davthewave has projected a movement in which Bitcoin continues to assert its dominance until the end of 2019.

According to him, the bitcoin market cap is trading inside an ascending wedge and will continue doing so for the rest of the year and afterward, it will break down.

This seems reasonable since alternate coins have not increased for a very long period of time. If they were to do so, the market cap dominance of bitcoin would decrease as a result.

BTC’s market cap dominance has been trading inside an ascending wedge since January 2018, when it reached the aforementioned low of 35%. 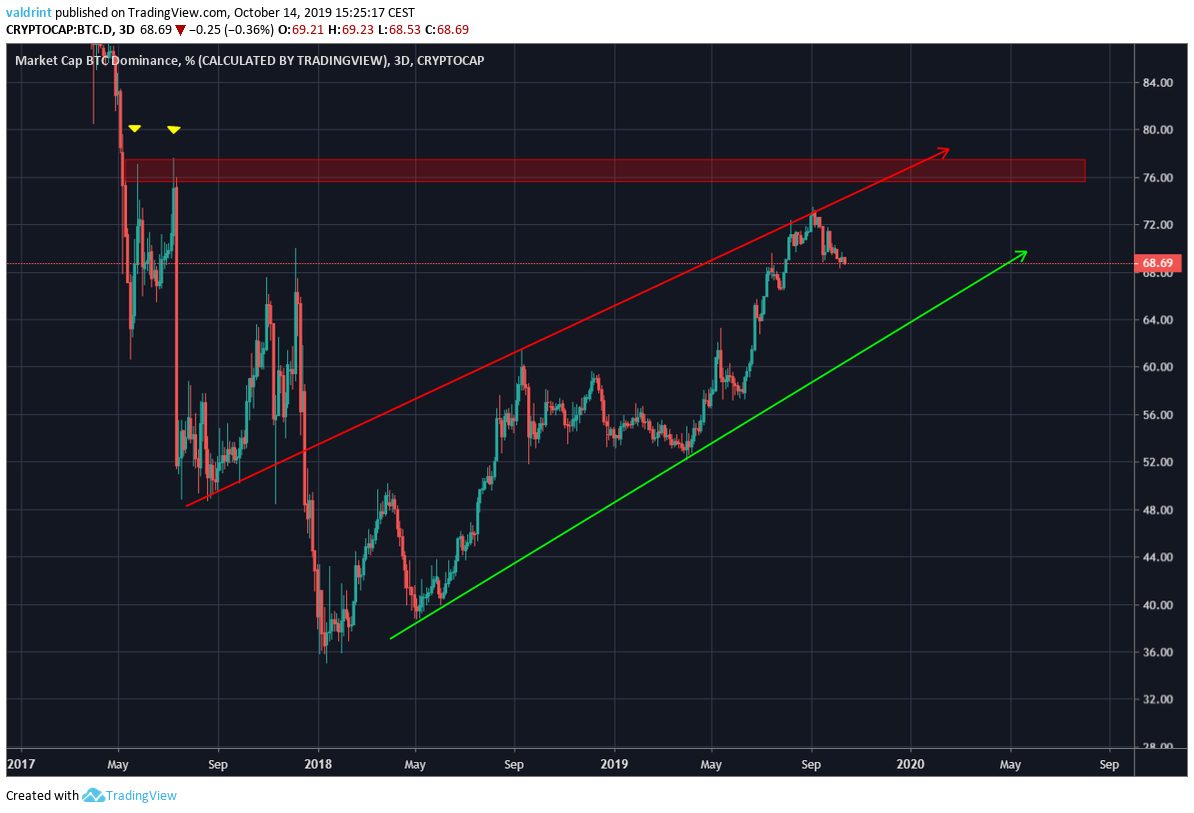 The main resistance area is at 77%, as evidenced by the May and July 2017 highs. If the price continues to increase at the rate predicted by the wedge, it will reach it in early 2020.

Looking at the RSI, we can see a strong developing bearish divergence. 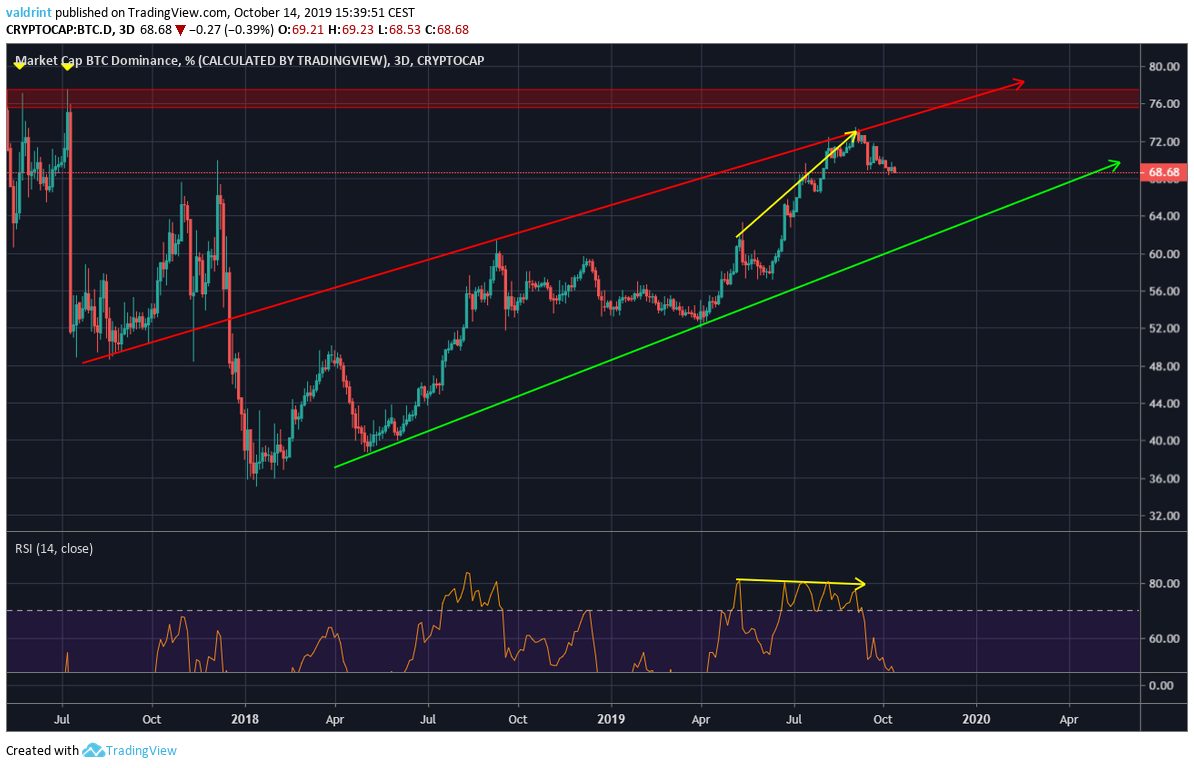 However, since the market cap dominance is not actually traded in an exchange, it seems somewhat futile to use indicators to predict its movement.

However, we can try to make a prediction for future movement by using finding similarities between Bitcoin’s price movement and the market cap of altcoins.

The alternate coin market cap is outlined in the graph below with candlesticks, while the orange line represents the price of Bitcoin. 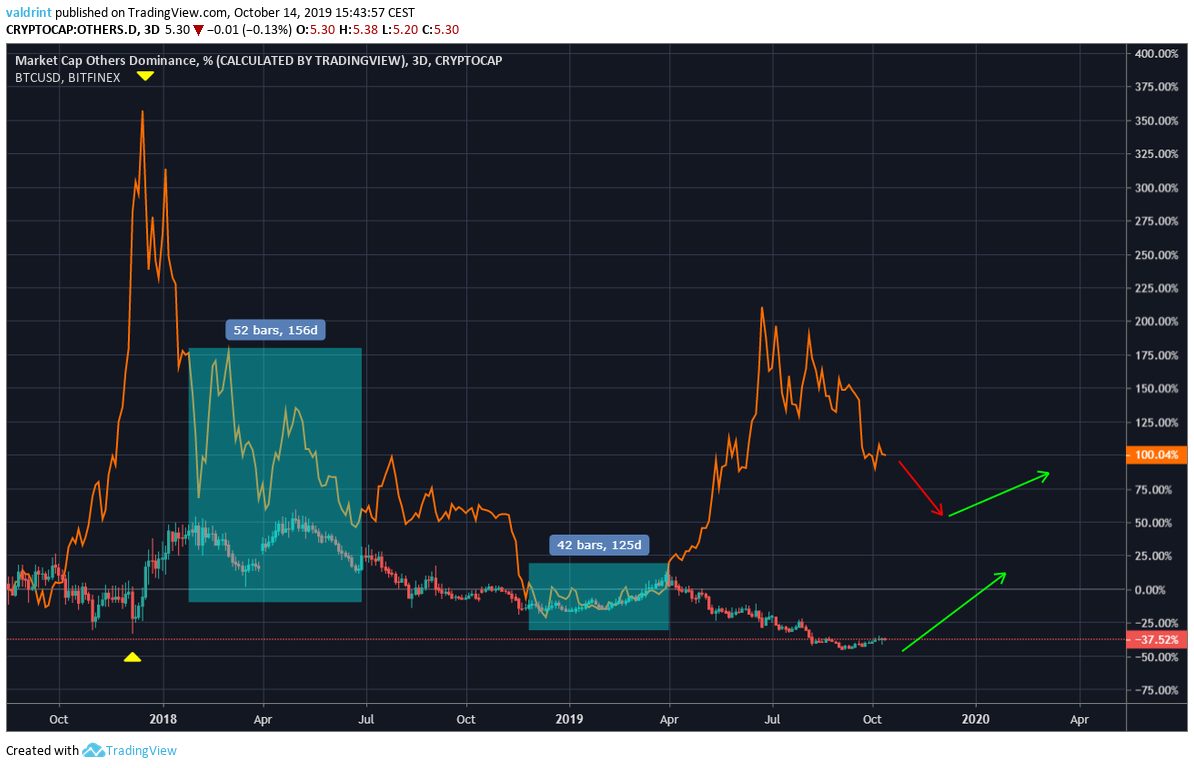 We can see that whenever the Bitcoin price reaches a high, the altcoin market cap usually reaches a low. This was especially evident in December 2017.

However, when Bitcoin consolidates, the altcoin market cap increases.

This seems reasonable since investors look to take out money from Bitcoin and flow that into altcoins in search of higher returns.

This was especially true at the beginning of 2019, prior to the current upward trend. During that period, the rate of increase of altcoins surpassed that of BTC.

Therefore, if the price of Bitcoin were to consolidate, we could see further increases.

BeInCrypto has discussed the possibility of bitcoin consolidating in one of our previous articles.

Do you think the Bitcoin market cap dominance will begin to decrease? when will it start to do so? Let us know in the comments below.