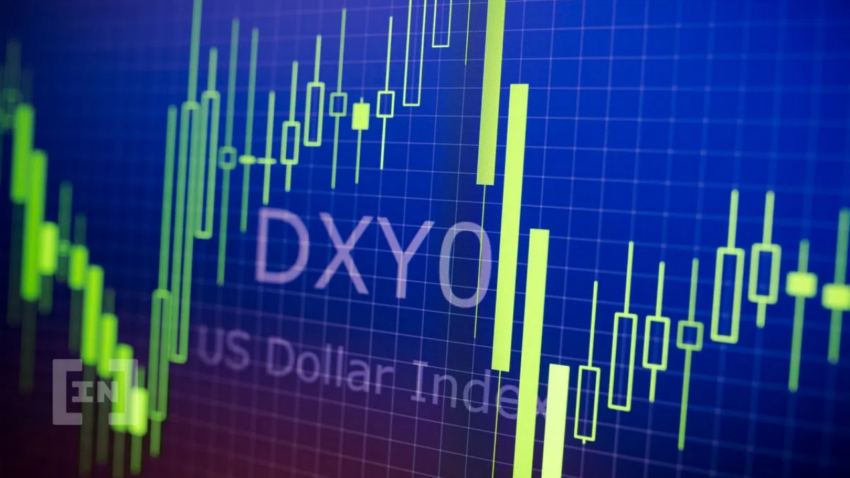 A rejection from this area could initiate a DXY correction, which, attributed to its negative correlation with the Bitcoin price, could be a bullish signal for the crypto market.

A sharp upward move was initiated after a bullish double bottom pattern (blue circles) appeared on the weekly chart of DXY between January and May 2021. Since that period, the DXY has risen from a low at 89.5 to a peak at 105 reached on May 13.

Examining the high momentum of the upward move is also evidenced with DXY closing six consecutive weekly candles above the upper Bollinger Band (blue arrows). Since March 2022, the Bollinger Band range has aggressively widened, which shows signs of a large increase in index volatility.

However, this continuation of a move cannot be sustained over a longer period of time.

Since March, the first bearish candle will have its closing today, which could show signs of an upcoming correction. If this happens, the first support level for DXY will be the 0.382 Fib retracement area at 99, which served as horizontal resistance in March.

The median of Bollinger Bands (orange) is also currently approaching this area. If this level is not held, the index could fall into a gold pocket in the 95.5-97 range.

A bullish re-test for the DXY?

There is a possibility, however, that despite the bearish signals, DXY has not yet finished its upward wave. This was also presented on Twitter by crypto market analyst @KevinSvenson_, drawing a five-year falling resistance line.

He believes that the U.S. Dollar Index has already broken out above this line, which he feels is currently taking a bullish re-test of it.

If the resistance line is approved as support, the DXY uptrend may continue.

The most important level, according to the analyst, is 102:

“102 is the key level there. If we bounce off of it it’s clearly bearish for asset prices. If we breakdown below it we may see some bullish speculation for the $SPX and #Bitcoin.”

The argument for the first scenario is provided by the daily chart of the RSI indicator.

Since July 2020, the indicator has formed a long-term rising wedge, resembling a bearish pattern that usually leads to a breakdown and decline. For nearly two years, the indicator appears to have respected (with a few exceptions) the lower line of that wedge.

If the DXY were to bounce off the aforementioned 102 level, the RSI would have to once again bounce off the blue support line (red circle). Ultimately, this support is currently near 50, an area of neutrality that if maintained will keep the uptrend intact.

However, if there is a breakdown from the wedge and a drop below 50, this will increase the likelihood of the DXY correction targets outlined above.

It is also worth noting that the MACD is aggressively declining and just generated today the lowest red momentum bar since July 2020 (red line).

A possible collapse in the DXY valuation could be a strong signal for growth in the cryptocurrency market.

Since Bitcoin’s inception, there has been a clear negative correlation of its price with the U.S. Dollar Index. If DXY is rising (green areas on the top chart), BTC is falling (red areas on the bottom chart) – and vice-versa.

The potential end of the bull market in the DXY could end the bear market in crypto. However, if the DXY has not said its last word and continues to rise, the crypto market – along with traditional markets – could plunge into a long-term bear market.