Dogecoin Price Analysis: DOGE/BTC Appears To Be Close To a Breakout

On June 26, 2019, the Dogecoin (DOGE) price reached a low of 24 satoshis. An upward move ensued. By July 5, DOGE had reached highs of 44 satoshis. A similarly rapid decrease ensued. Since then, DOGE has been trading in a range between 26 and 31 satoshis. 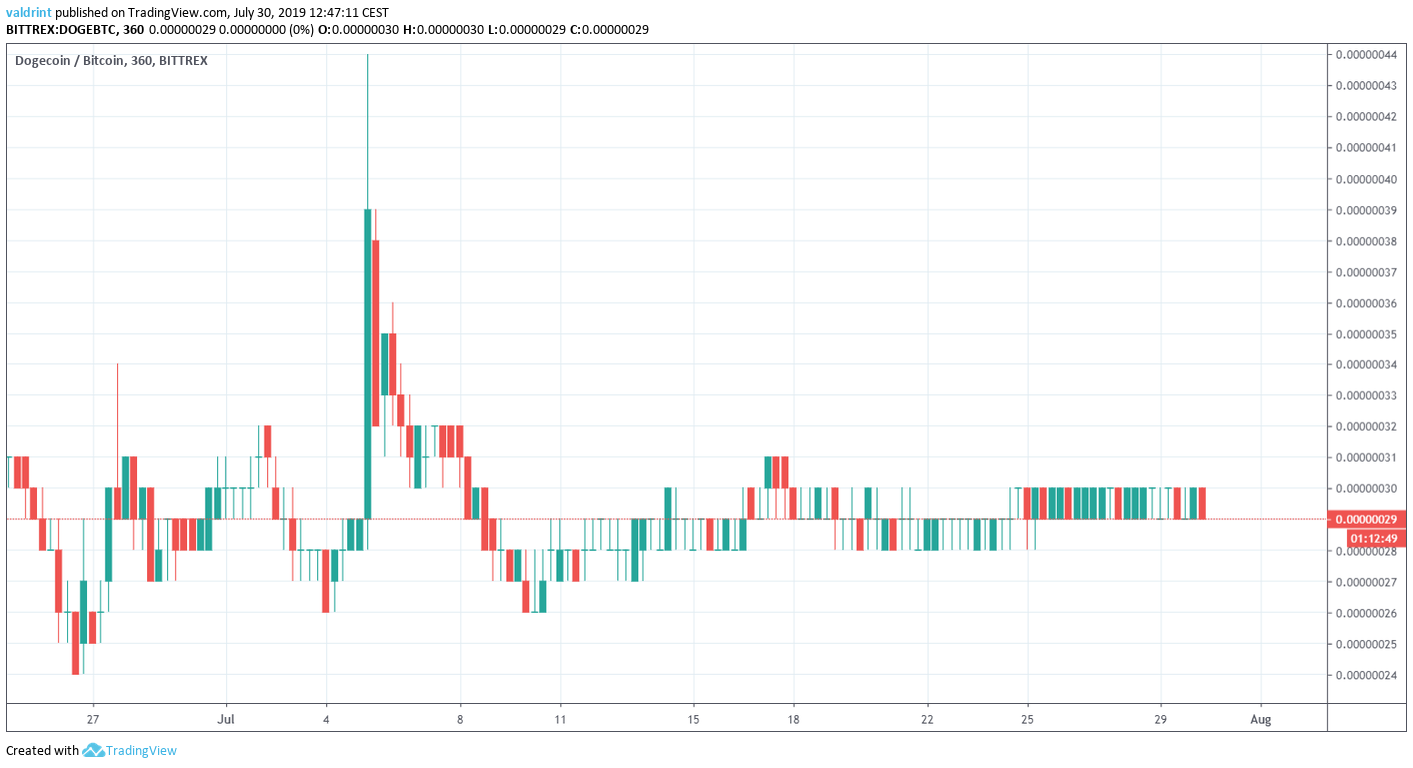 If you are interested in trading cryptocurrencies with a multiplier of up to 100x on our new partner exchange with the lowest fees, follow this link to get a free StormGain account!

Since reaching the aforementioned low on July 26, the DOGE price has been following the ascending support line outlined below. 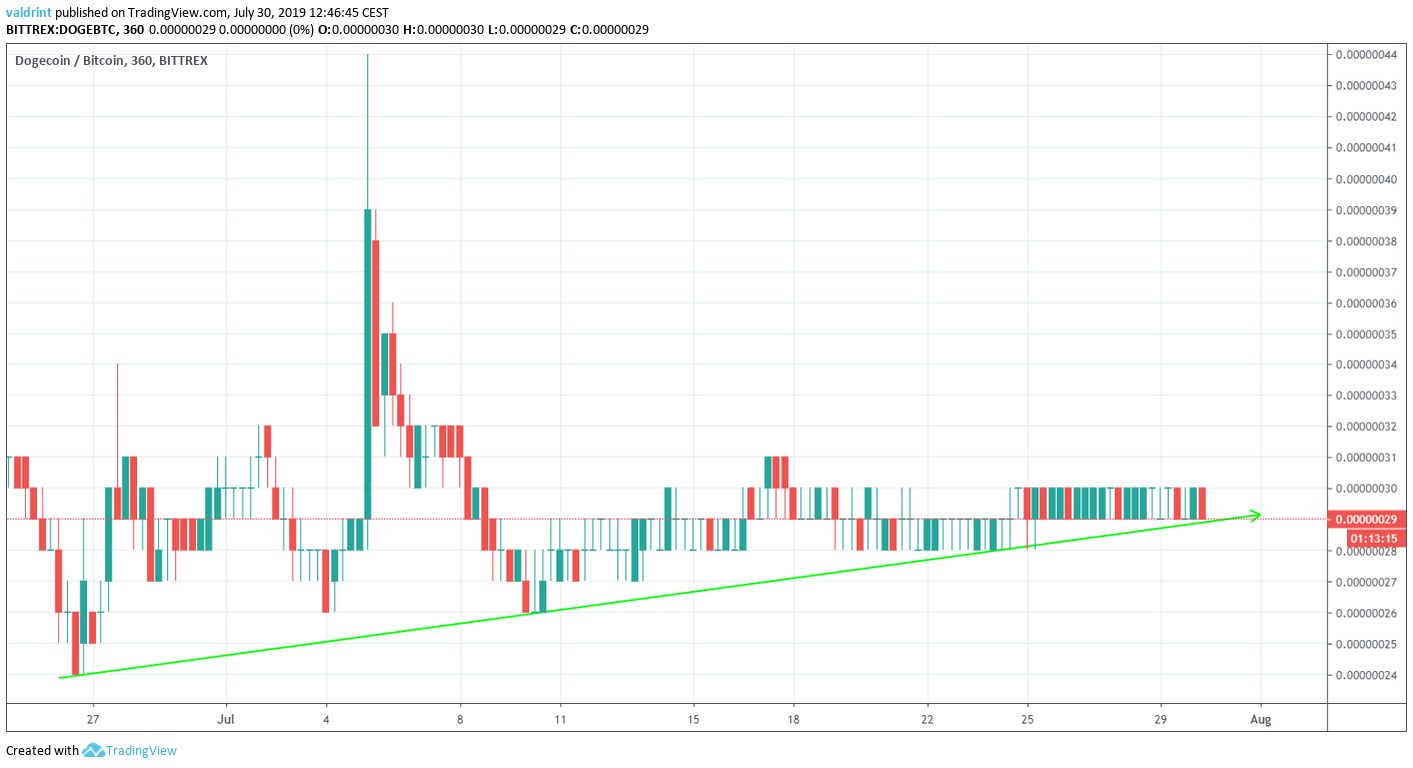 At the time of writing, it was trading right on the support line.

It has been doing so for the past week.

This is the fourth time the support line has been touched.

A look at the daily time-frame shows that DOGE has been trading inside a symmetrical triangle since the beginning of May. 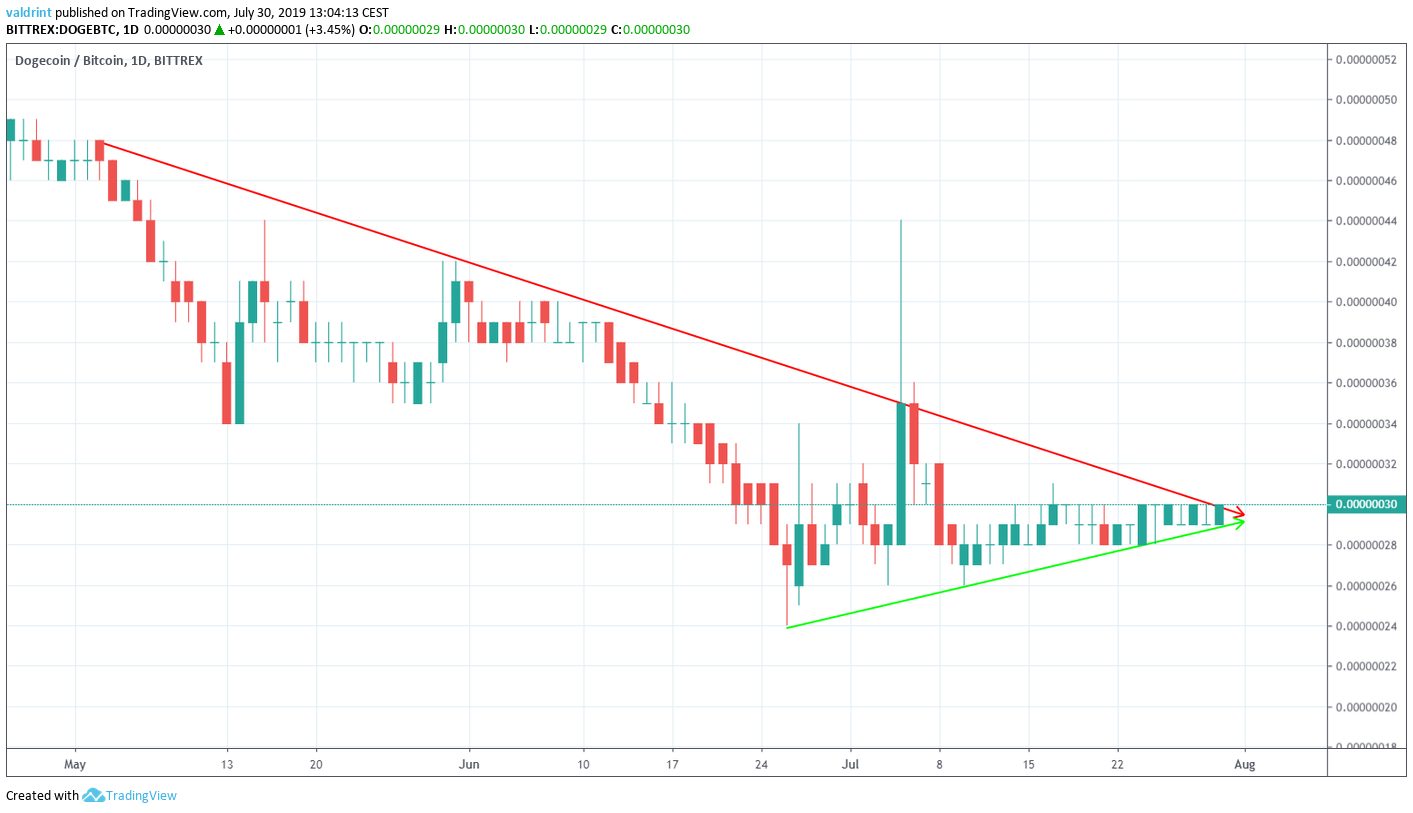 Additionally, the DOGE price is quickly approaching the end of the triangle.

A decisive move should occur within the next few days.

Also, we can see that the triangle emerged inside a very significant support area. 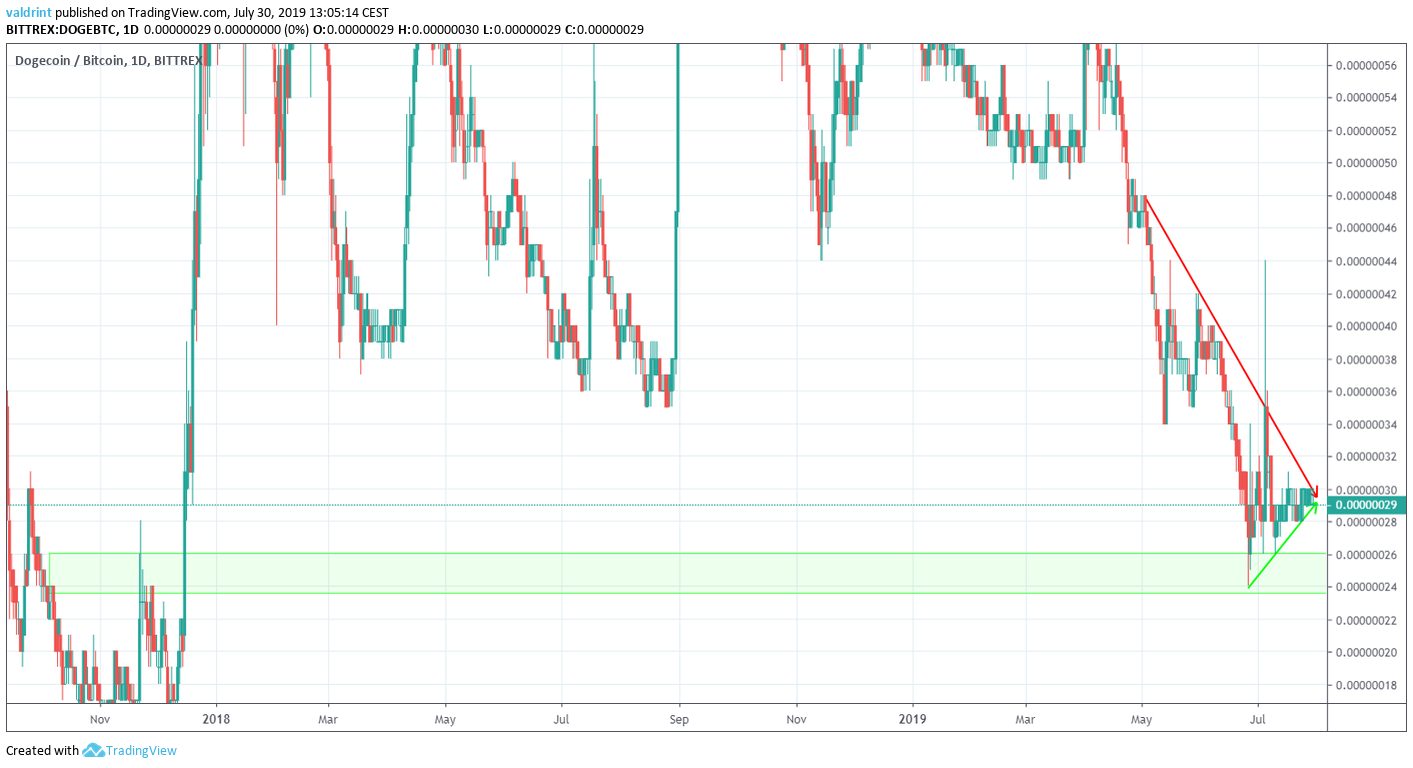 The support area is found near 25 satoshis and previously acted as resistance in December 2017.

Since the beginning of 2018, DOGE has not traded below this level.

An analysis of price movement gives us a bullish sentiment.

However, it is not sufficient in predicting a breakout.

Let’s take a look at some technical indicators to see if they confirm our bullish point of view.

A look at the daily moving averages (MA) suggests that an uptrend may have already begun. 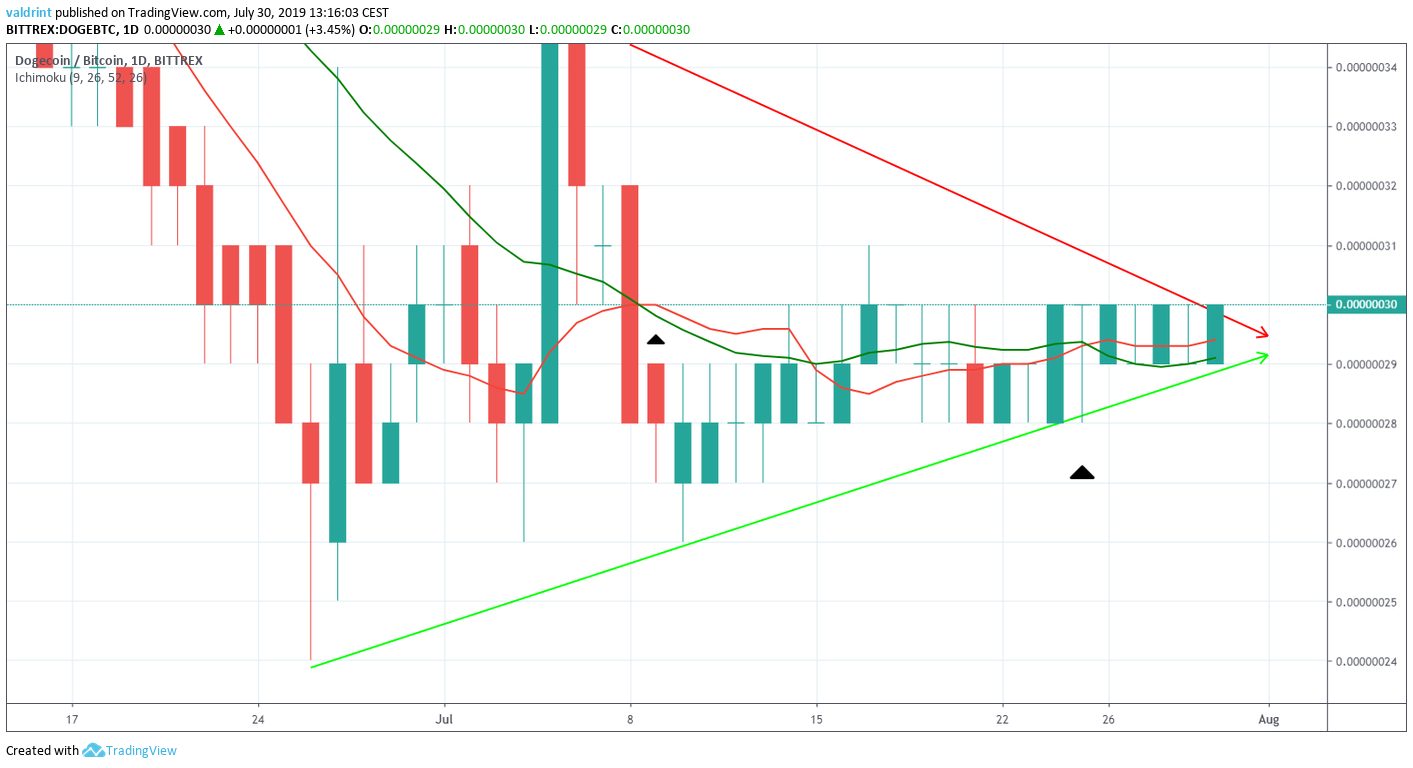 Furthermore, the Dogecoin price is trading above both of them.

While a bullish cross also occurred on July 9, at the time DOGE was trading below the MAs, reducing the significance of the cross.

A look at the MACD confirms the hypothesis laid out by the moving averages. 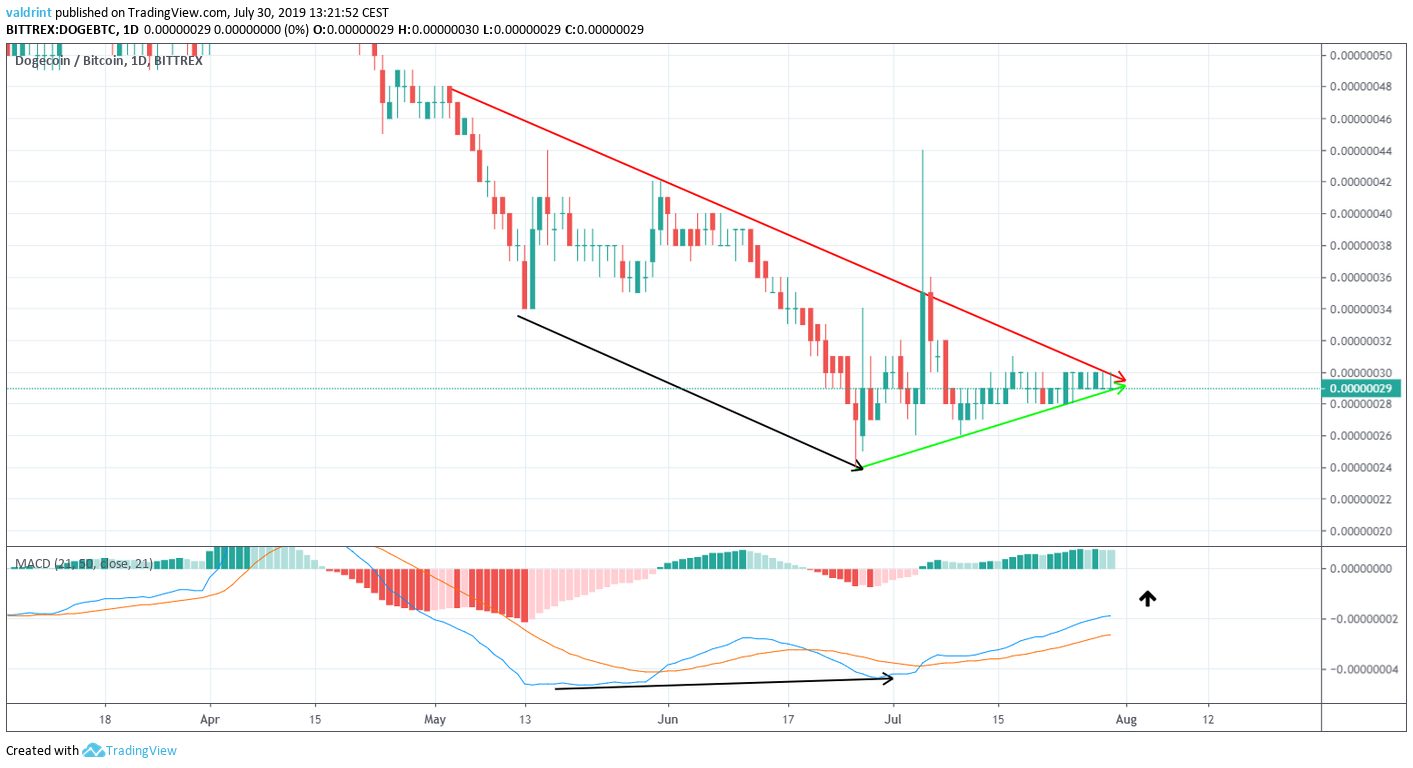 First, the MACD has been generating very significant bullish divergence.

Second, it is close to crossing above 0. If that occurs, it would confirm that the price is in an uptrend.

The use of these indicators combined with previous price movement make a breakout very likely.

If that occurs, two resistance areas are outlined below: 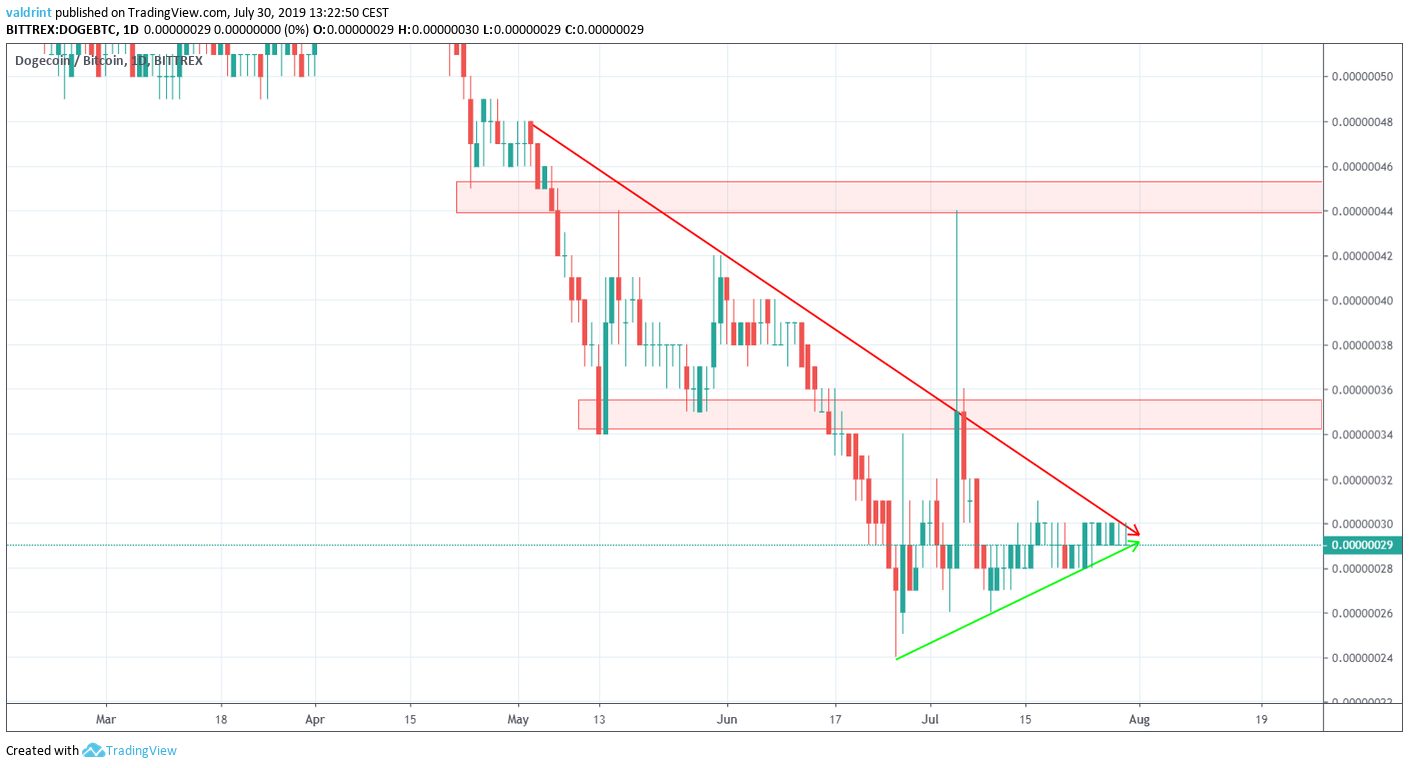 The area found at 35 and 44 satoshis respectively.

According to our analysis, it is likely that the DOGE price will reach at least one of them.

The DOGE price is trading inside a symmetrical triangle.

According to our analysis, it is likely to break out from the triangle and reach at least one of the resistance areas outlined above.

Do you think DOGE will break out from the triangle? Let us know in the comments below.