By Martin Young
7 July 2020, 08:15 GMT+0000
Updated by Kyle Baird
7 July 2020, 08:15 GMT+0000
In Brief
The big milestone of $2 billion in total value locked has arrived for decentralized finance markets as the embryonic industry keeps growing. Ethereum is feeling the pressure though, and the network fees are reflecting this.
It came quicker than expected, but the DeFi markets have just reached the $2 billion mark in terms of TVL according to DeFi Pulse. In less than a month, the total amount of crypto collateral locked into DeFi smart contracts has doubled. The liquidity mining craze has driven the momentum for DeFi after Compound Finance kicked it off with token distributions which started on June 15. Balancer followed suit and others such as bZx, Kyber Network, and Aave have joined the fray. Most of these DeFi tokens have surged in price, some even doubling over the past month. DeFi has become the ‘new ICO craze,’ as depositing and lending crypto-assets has become more lucrative than just trading or speculating on new token offerings. Taking a glance at the top performers of the day over the past week will show that they are predominantly DeFi based tokens such as 0x, Ren, LEND, REP, KNC, etc. The traditional crypto assets such as XRP, Litecoin, EOS, or BNB are nowhere to be seen in terms of price gains and have been relatively flat for the past few months.

Aave, the open-source, non-custodial protocol on Ethereum for decentralized lending and borrowing is today’s digital darling, as its native LEND token is on a moon shot. LEND has surged 30% over the past 24 hours, from around $0.145 to top out just below $0.19, its highest price since the January 2018 crypto bubble. Aave operates by minting ERC20-compliant aTokens at a 1:1 ratio to supplied assets. Interest immediately starts compounding continuously, represented by a steady increase in the number of aTokens held by the lender. In a recent announcement, the platform introduced reputation-based lending as an alternative to collateral-based. Three Arrows Capital CEO, Su Zhu [@zhusu], commented that this model of collateralizing a crypto loan could be revolutionary for the industry:

Undercollateralized lending on @AaveAave will both end well and blow your mind. Reputation/identity based finance has rightfully been a holy grail for some time, I think the design space is enormous here,

When asked how this works, Aave replied that individual users will be able to delegate their credit lines to other trusted parties, with some ‘off/on-chain magic.’ It made the analogy of an ‘OTC lending desk powered by an underlying decentralized money market.’

With @AaveAave announcements today, it seems DeFi lending space is basically splitting into two schools: either risk / reward accrues to token holders ($MKR, $LEND, etc.) or to users themselves ($COMP, dYdX, etc.) who can vote with their feet.

At the time of writing, the poll Schmidt added to the post showed 56% voting for token holder-based governance over 44% for users making the decisions.

A Big Week in DeFi

There have been some big developments in the DeFi space over the past week or so. Ethhub co-founder, Anthony Sassano [@sassal0x] delved into some of these advancements in his latest weekly industry update. In addition to developments at Aave, Kyber’s Katalyst officially launches today offering staking opportunities for KNC holders on the new KyberDAO. In its latest update, the Kyber Network stated that staking will begin today (July 7) marking the launch of ‘Epoch 0,’ while governance voting will start a week later with ‘Epoch 1.’ Rewards to voters will be distributed two weeks after that with the start of ‘Epoch 2.’ As a result, KNC has been on a wild ride recently, topping out at a two year high of $2 last week. Staking does wonders for FOMO on a crypto asset, as has been evidenced by the performance of Tezos this year.

Sassano also reported that The Graph announced the closure of a $5 million funding round from various crypto funds and ventures last week. The Graph is an indexing protocol for organizing and efficiently accessing data from blockchains and storage networks. DEX protocol 0x launched its own user-friendly exchange last week, dubbed Matcha. Again, the ZRX native token for the protocol has been extremely bullish recently with a surge of 18% over the past week. Other notable developments include the SKALE network launch for Ethereum scaling, DXdao’s launch of Omen on the open framework developed by Gnosis for prediction markets, and the launch of pooled staking by Nexus Mutual.

All of these events have been bullish for the nascent DeFi ecosystem, but it appears the foundations of this financial landscape are cracking under the pressure, despite many on-chain metrics improving. There has been an increased level of discontent in the crypto community about the risings costs on the Ethereum network. These high gas fees make the tiny operations with DeFi smart contracts impractical and financially unsustainable. Ethereum has yet again become a victim of its own success. Messari researcher, Ryan Watkins [@RyanWatkins_], pointed out that while there are some positives from high network fees, bad user experiences may deter the masses from getting into DeFi: 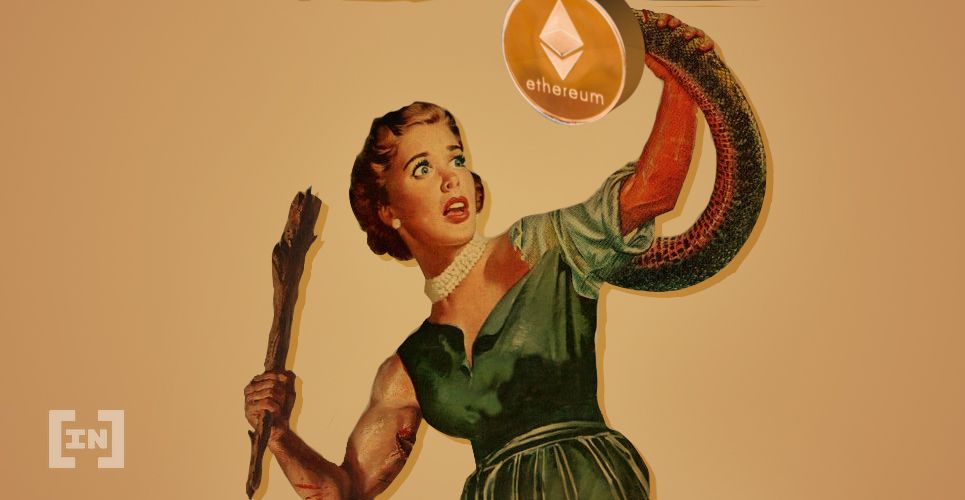 According to industry research Larry Cermak [@lawmaster], who has been a detractor of most things DeFi related, Ethereum’s transaction fee as a percentage of total miner revenue is soaring and far surpassing Bitcoin’s despite the recent halving. As reported by BeInCrypto recently, Ethereum network fees have been substantially higher than Bitcoin’s for the past 30 days. As DeFi continues to grow in popularity, demands on the underlying Ethereum network will follow suit leading to even higher fees—that is until Layer 2 scaling solutions can be successfully deployed on mainnet. Many have been wondering when this demand will be positive for Ethereum prices, which are still in the digital doldrums despite a 5% gain on the day. ETH has currently regained the $240 level, but the long term trend is still very sideways for the world’s leading smart contract network. DeFi does not seem to have made much difference to Ethereum prices, so hopes for HODLers are likely being placed on ETH 2.0, proof-of-stake, and some serious scaling solutions slated for release later this year.