Chainlink’s Wyckoff Chart Suggests a Bearish Market Cycle Is Near

Despite positive news and recent highs, the Chainlink price movement has been bearish.

Chainlink announced on November 13 that it had launched its community advocate program. The program continuously searches for advocates who will add value to the product by engaging in events in order to increase referral leads, sale references and contribute to higher customer value.

Chainlink previously announced its new node — the prophet node — which will give real-world data to the ecosystem of the project.

We're excited to welcome @prophet_node as the newest node operator to further decentralize the Chainlink network. They're backed by a team of blockchain enthusiasts and early adopters with a wealth of blockchain infrastructure experience. https://t.co/m8zUmat6A8

Positive news aside, there are several possible patterns in play for Chainlink — which all suggest further price decreases.

Cryptocurrency trader @pentoshiswallet stated that the LINK price is following a Wyckoff distribution method and has reached a top.

I'm certainly no Wyckoff expert not my strength so take this meme with a grain of salt. If you know who the best wyckoff trader is tag them please. $LINK But just imagine for a second. Just… Imagine…. One of the greatest transfers of wealth taking place. No timeline pic.twitter.com/Vmq0zltLqk

According to the chart, the Chainlink price is currently in Phase D before a massive price decrease begins. Let’s take a closer look at the LINK price movement and examine what may happen next.

Chainlink and a Possible Wyckoff

In order to use the Wyckoff chart, several stages are outlined in the graph below.

The Chainlink price has been decreasing since. The next phases predict an intensified downward move. 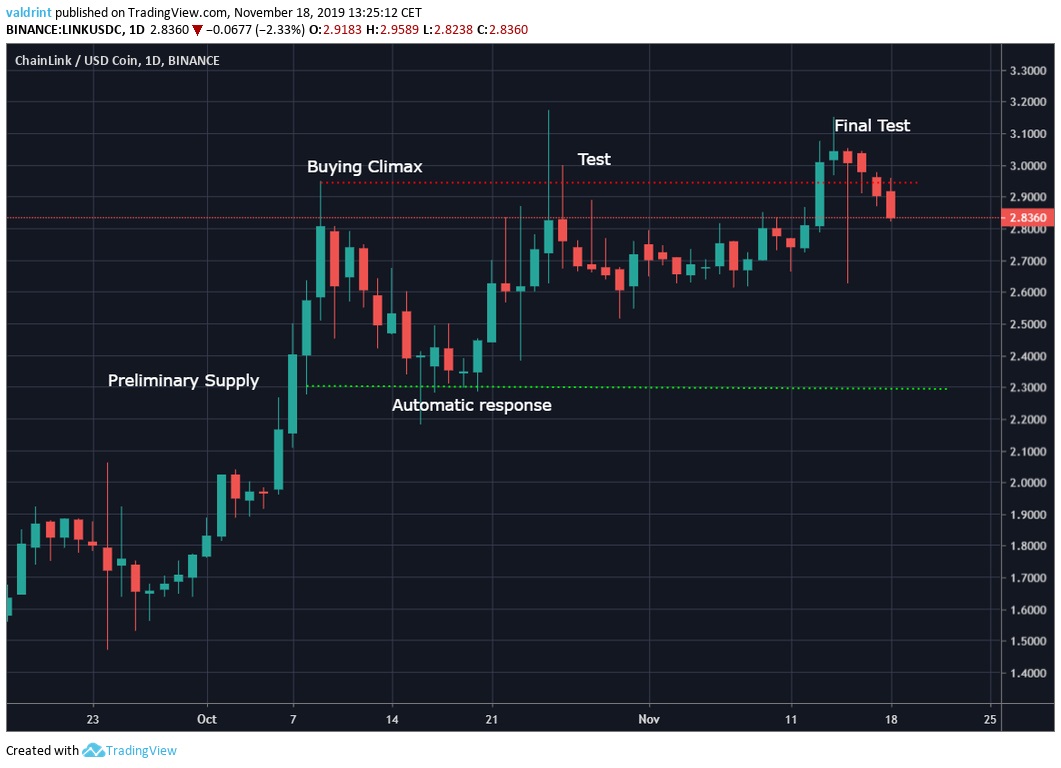 Even if we do not use a Wyckoff distribution, there are two possible patterns developing for Chainlink.

Both of these movements should be considered bearish. 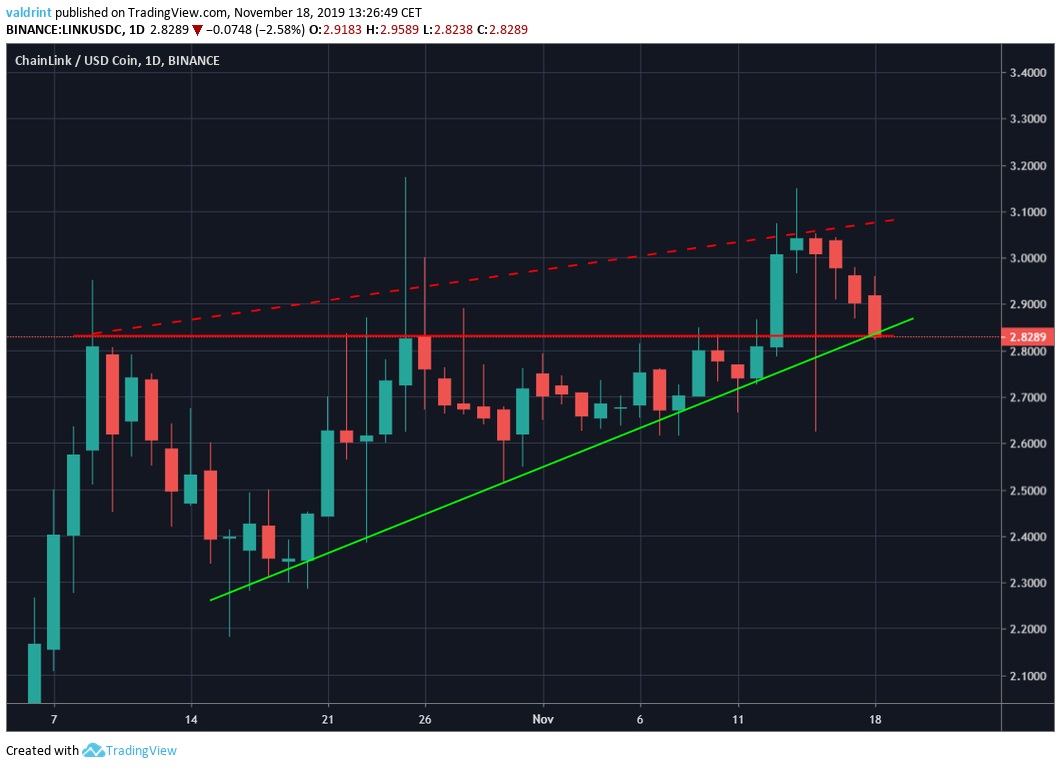 Finally, these higher highs have all been combined with a bearish divergence in both the RSI & MACD. This validates our hypotheses laid out previously which suggests price decreases. Therefore, the LINK price movement looks bearish — regardless of the method used to do the analysis. 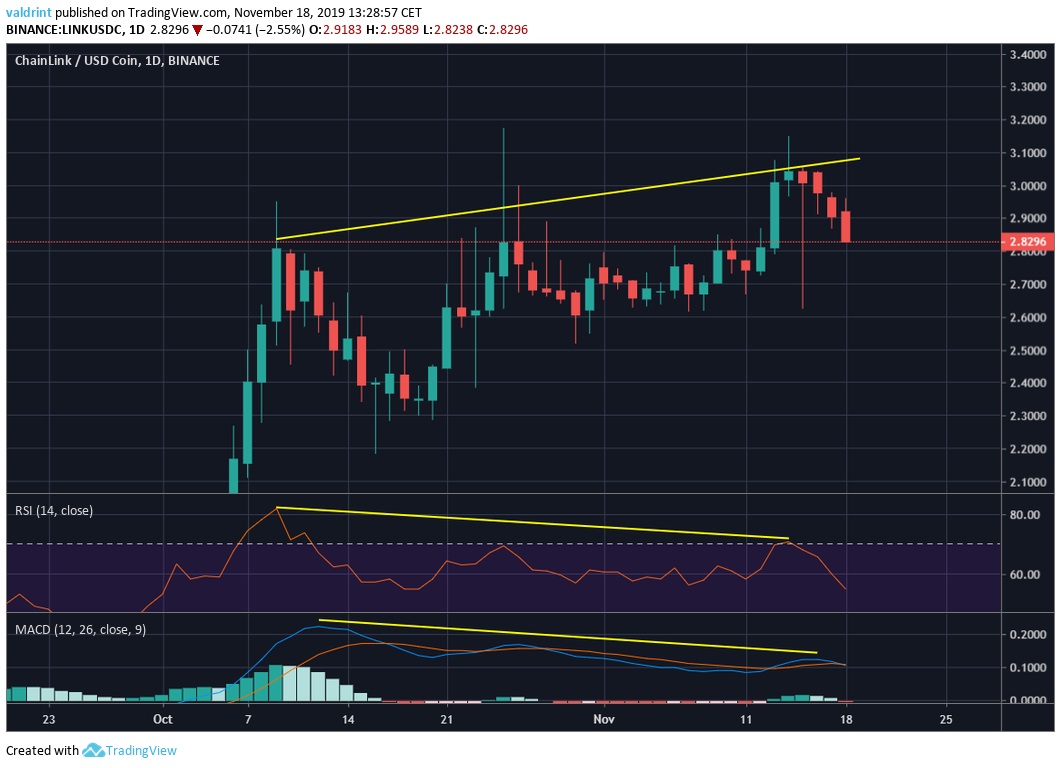 Was DeFi the Best Option for Cryptocurrency Investing in 2019?

Following the Bitcoin Boom came an altcoin season and the ICO craze, but ever...

Chainlink Breaks Down From Its Pattern — What’s Next?

The Chainlink (LINK) price broke down from an ascending wedge and is likely headed...

Bitcoin has forever been the undisputed king of the decentralized digital economy. Granted, the...

Stratis Has Potential for a 100x Price Increase, Suggests Analyst