Since the Bitcoin price has seemingly been immune to negative news, having increased by roughly 30% in the past two days.

While the Bitcoin SV price has experienced significant increases over the past few days, we cannot confidently state that it has begun an uptrend. Rather, it is likely to consolidate and create a trading range before it decides on its next move. A breakout above $125 would likely invalidate this hypothesis and indicate that a new uptrend has begun.

Cryptocurrency trader @river posted a picture of her cryptocurrency watchlist that outlines her greatest risers and fallers:

What immediately stands out is the nearly 20% increase in price by Bitcoin SV.

Is this increase the beginning of a new uptrend or is it just a retracement in response to prior moves?

Let’s look at the price movement more closely to determine which is more likely.

Looking at the daily chart, we can see that BSV reached a high in June and has been decreasing since.

The decrease stopped at least temporarily once it reached the $85 support area.

An interesting development is that the Oct 21 increase caused the price to break out above the descending resistance line.

A breakout above resistance often means that an uptrend in a specific time-frame has begun.

However, the price is still below the Sept 23 levels, when the latest breakdown occurred.

Therefore, this is still a lower high in response to prior decreases. 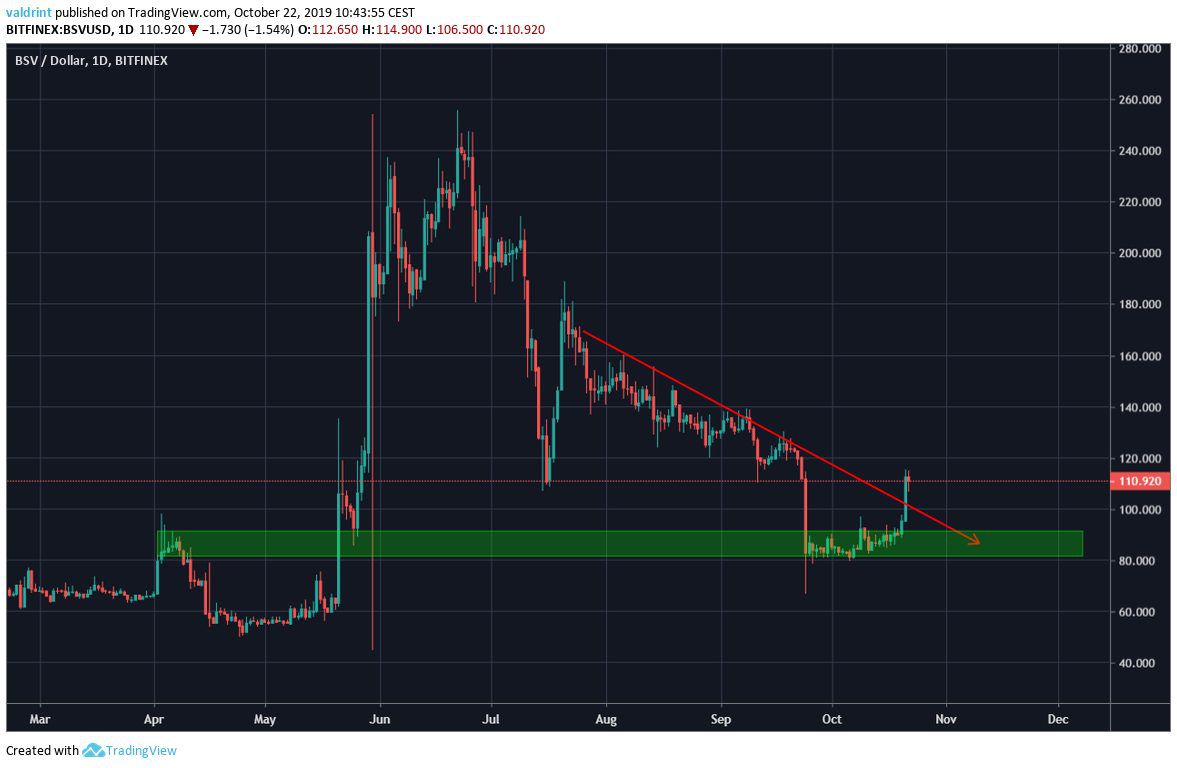 The rally stopped, however, as soon as the price reached the $115 resistance area.

This area is significant because it previously acted as support and coincides with moving average (MA) resistance.

The long-term 100 and 200-day MAs have just made a bearish cross and are offering resistance to the price.

A bearish cross of such long-term MAs often indicates the beginning of a long-term downtrend. 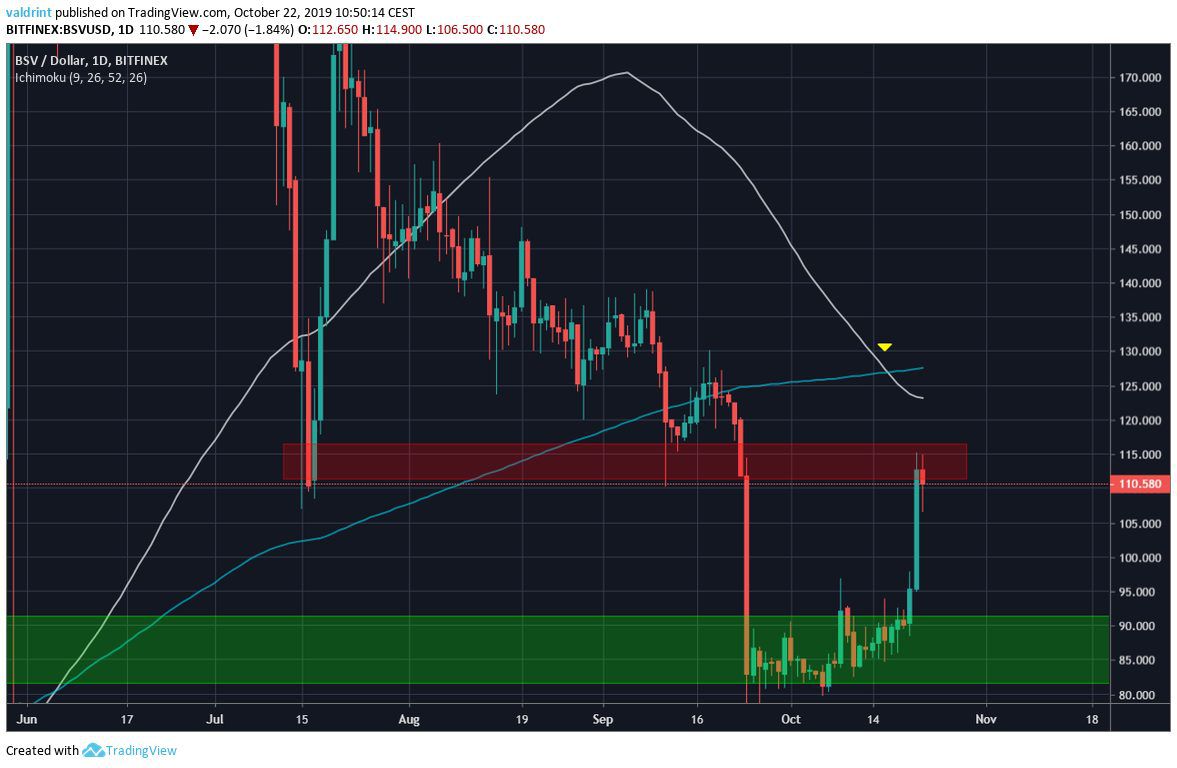 Looking closer at the hourly chart, we can see that after BSV broke out from a symmetrical triangle and completed a five-wave upward move.

Once it reached the resistance area, it created a double top and began to increase.

This is a sign that the upward move has lost its strength and some retracement is likely.

We would expect the price to retrace at least 50% of the move, finding support above $100, possibly decreasing all the way to the breakout level at $92. 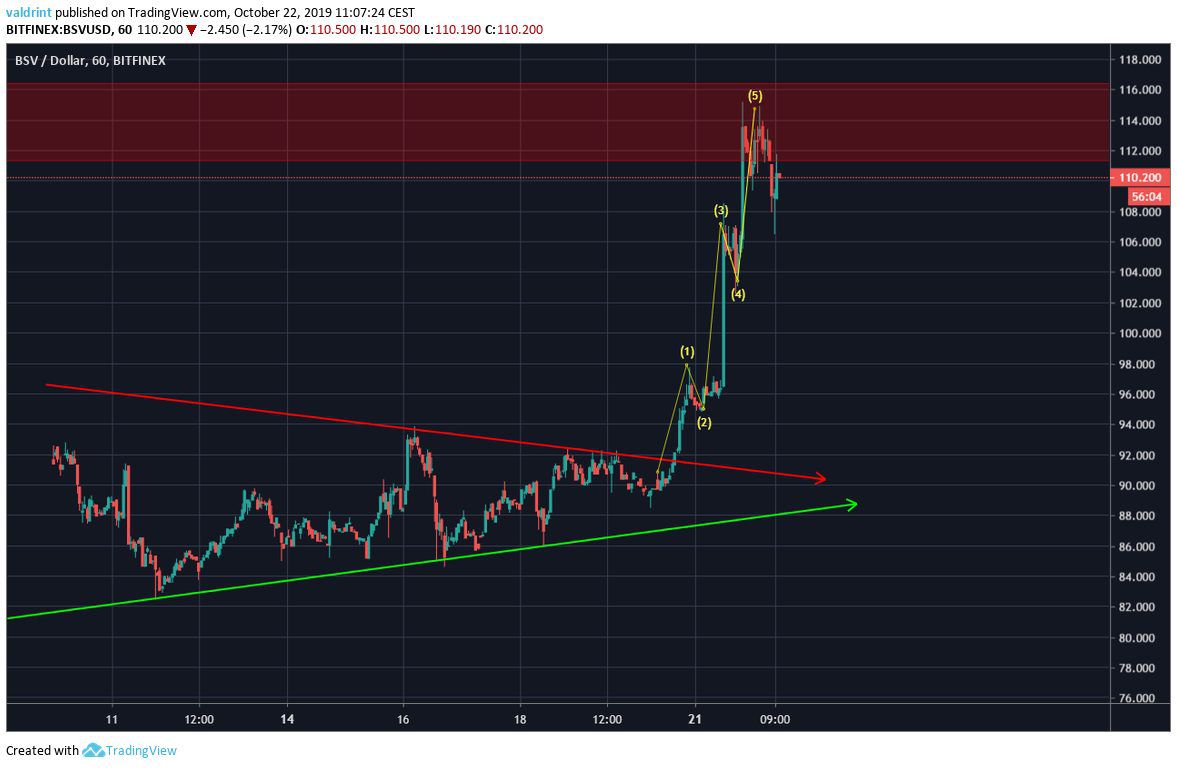 Do you think BSV has begun a new uptrend? If not, where will the price make a new low? Let us know in the comments below.

90 Percent of Cryptocurrency Firms May Be Bankrupt in Six Months: Swiss Blockchain Federation
#Companies News 4 weeks ago
Up Next
Bitcoin Analysis for 2019-10-22 [Premium]
Bitcoin Analysis 7 months ago
Related News