Recent data shows that ERC20 tokens on Ethereum are gaining more and more market share relative to the main project.

Could we see a resurgence of ERC20 tokens on Ethereum?

After 2017, many of them were associated with failed ICOs and no use-case. Many thought that the hype around ERC20 tokens was largely dead. After all, 2018 was a rough year for Ethereum and its token ecosystem. However, ERC20 tokens have bounced back in 2019 despite all odds.

However, 2019 has seen some ERC20 tokens rebound significantly. In fact, the total market capitalization of all ERC20 tokens has gained relative to Ethereum this year substantially. As CoinMetrics (@coinmetrics) recently illustrated, the uptick has been slow but steady.

In this week’s issue of State of the Network we analyze the evolution of Ethereum tokens and look at where they are headed.

In 2015, Ethereum opened the floodgates to ‘tokens’ which reached their zenith in 2017. The ERC20 token became, at one point, the de facto token standard across the entire cryptocurrency world. However, with platforms like Tezos (XTZ) and Tron (TRX) now issuing their own tokens, the competition is becoming much more fierce. Yet, it seems that ERC20 tokens on Ethereum have held their own in 2019 and even gained significant market share. 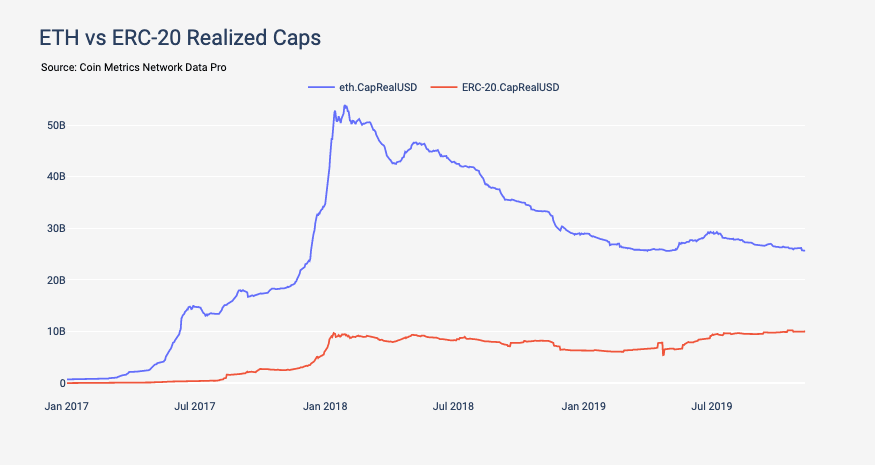 Are ERC20 Tokens Making a Comeback on Ethereum?

It’s not likely we’re going to see ERC20 tokens reach the heights they hit in 2017. However, recent trends indicate that they will still form a significant fixture of the cryptocurrency industry for some time.

For now, Ethereum is more focused on transitioning to a proof-of-stake consensus model and decentralized finance than building up its token ecosystem. Still, the growth of these tokens is overall a net boom to Ethereum as a whole. It’s good news for Ethereum fans and is further evidence that the network is still quite active.