Futures contracts are literally agreements to buy or sell an asset on a future date and for a fixed price.... More were added on Binance. The price increase that preceded the announcement caused numerous observers to make accusations of insider trading.

The XRP price started to move several hours prior to the announcement, giving the impression that insiders were aware of the information before it became public. So far, the CEO of Binance has denied the accusations.

In 2020, Ripple has continued with its monthly scheduled release of 1 billion XRP from its escrow. In addition, the ‘feud’ between Ripple’s CEO and Bitcoin

BUY NOW has been ongoing. In the end of January, Ripple CEO Brad Garlinghouse told the Wall Street Journal that ‘I’m bullish on BTC as a store of value, but not for payments. You don’t want to use BTC at Starbucks because by the time you get your coffee, it’ll be cold.’

However, the global market decline in March has been more pronounced in the price of XRP than that of BTC. In light of these developments, BeInCrypto will attempt to predict the XRP year-end price for 2020, 2021, and 2025.

The XRP price saw a very severe downturn on March 11. The decrease continued for two more days, until the price settled on a low of $0.114. XRP created a very long lower-wick on March 13 and has been increasing since.

The price has thrice failed to break out above the 0.5 Fibonacci level of the previous decrease at $0.168. This means that the current movement is still more likely to be considered a retracement rather than the beginning of a new upward move.

In addition, the price is trading inside a symmetrical triangle, which has an unusual resistance line. This resistance has been in place since Feb 25 and has intermittently acted as both support and resistance.

The current movement makes it more likely that XRP will break down from this pattern and move towards the next support area at $0.14. This area is still considerably higher than the March 13 low, making it a possible bullish formation.

We can describe volatility as how much the value of an asset changes over a given time. A volatility index... More and numerous movements that are near impossible to predict, we have created a telegram

Crypto signals are trading ideas from expert traders to buy or sell a particular cryptocurrency at a specific price or... More group for hosting daily discussions about recent price movements as well as educational content intended to help traders of every skill level.

Throughout its history, XRP has reached several notable highs and lows.

The most significant are given in the table below:

In order to predict the XRP price in the distant future, we will attempt to find similarities between price movement patterns in the existing market cycles up until this point. Additionally, we will use technical indicators in order to help confirm these similarities. From there, these indicators can be used to make predictions about the rate of movement, a useful strategy to help in predicting the price at an exact point in the future.

Since 2015, there have only been two periods in which the weekly RSI has fallen below 35 — on November 12, 2015, and on March 13, 2020. Therefore, we could make the assumption that these two lows represent similar points in their respective market cycles. In this particular case, the lows that preceded an accumulation period prior to the main bullish market cycle.

Going back to the lows, we can see that the rate of decrease and time it took for the price to reach these lows from their preceding highs has been very dissimilar.

These aren’t the only similarities between the two bottoms. Slightly prior to the 2015 bottom, the 10 and 20-week moving averages (MA) had made a bearish cross. The price began to decrease shortly after, a movement that continued until the price reached the aforementioned low. In addition, XRP fell below the lower Bollinger Band on two occasions, including at the bottom.

An almost identical movement occurred during the 2020 bottom. A bearish cross between the same MAs transpired in August 2019 and signaled a downward move. A much longer decrease ensued, which is not surprising in hindsight due to the 2.42 time period ratio calculated above. In an almost identical manner, the price decreased twice below the lower Bollinger band. While the second decrease went far below the band in the form of a wick, the closing price was very similar to that in 2015.

In the previous section, we made the calculated assumption that the movement after the March 13, 2020 low was very similar to that after the November 12, 2015 low. However, this move occurred 2.42 times slower with a magnitude of 1.1 times greater.

Now, we can use these ratios to find the price after the November 12, 2015 low that coincides with that on December 31, 2020. Since the end of the year is 273 days from the date at the time of writing, we need to find the price difference 133 days after the November 12, 2015 bottom and apply it to the current date — multiplying it with a magnitude of 1.1.

Doing this gives us a price of $0.35 on December 31, 2020. It is worth mentioning that we are using the closing prices instead of the weekly wick-lows seen on March 13. This is done since the considerably low-wick is considered an extreme outlier, due to its massive decrease below the lower Bollinger band.

As for the macro movement, it looks as if the price is trading inside a descending wedge. It is possible that the price continues trading inside this wedge for a few more months prior to breaking out and moving towards the given target of $0.35 by the end of the year. 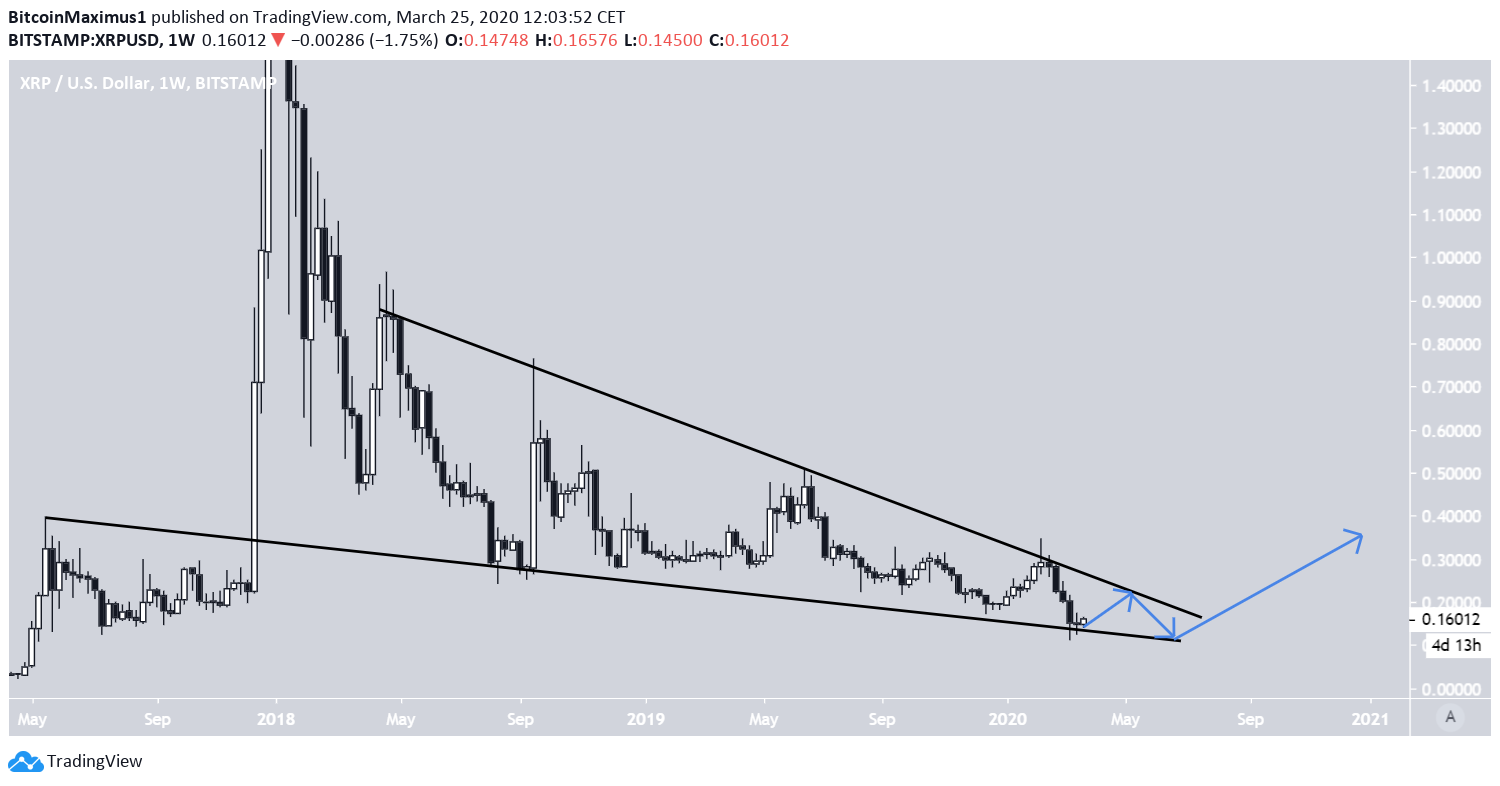 Doing so, we get a price of $0.256 for December 31, 2021 — a lower target than our prediction for the end of 2020. However, it makes sense when using the current method, since after the November 12, 2015 bottom the price began a very long period of consolidation prior to eventually initiating a very rapid upward move that culminated with the $3.53 high in January 2018.

According to our prediction model, this consolidation is likely to continue until the end of 2021.

Sticking with the same data extrapolation methods used in the predictions above, we can estimate the price on December 31, 2025. Using the 2.42 rate of time allows us to use a date after the 2015 correction that corresponds with December 31, 2025.

As with any cryptocurrency, the potential for volatile swings in both directions remains. However, XRP has distinguished itself relative to many cryptocurrencies in several categories, including but not limited to name recognition, partnerships, and use cases. Even though the company has Ripple has been experiencing a somewhat hectic 2020, the high potential for widespread XRP adoption persists.

Do you think XRP will ever reach a double-digit price? What has to occur in order for the price to do so? Let us know your thoughts in the comments below!

Disclaimer: This article is not meant to be used as personal investment advice, nor is it information from a qualified investment advisor. Cryptocurrency is a notoriously risky investment, and it is possible to lose everything. Please conduct your own research and investigation prior to investing in cryptocurrency.