XRP Price Analysis: Triple Bottom for Xrp/Btc — Will It Begin an Upward Move? 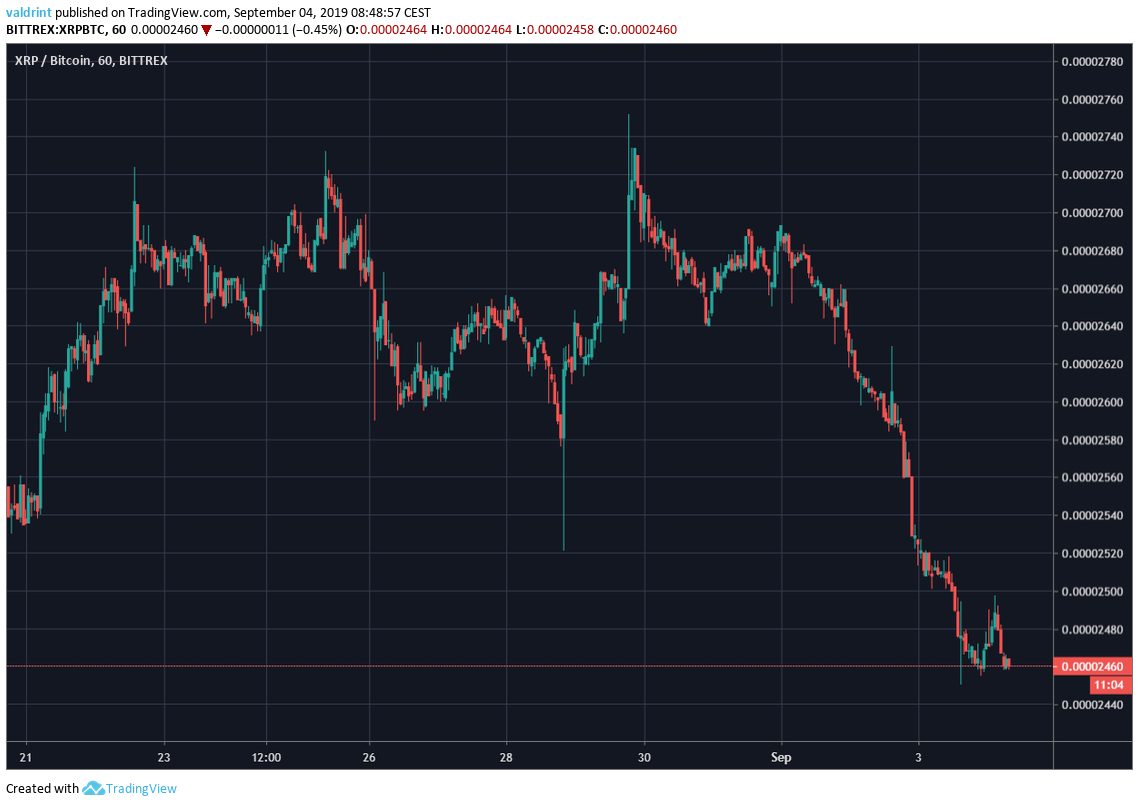 At the time of writing, the XRP price was trading below 2500 satoshis.

When will XRP stop decreasing? Continue reading if you want to find out.

A look at the daily time-frame shows that beginning on August 6, XRP traded inside a symmetrical triangle for 26 days. 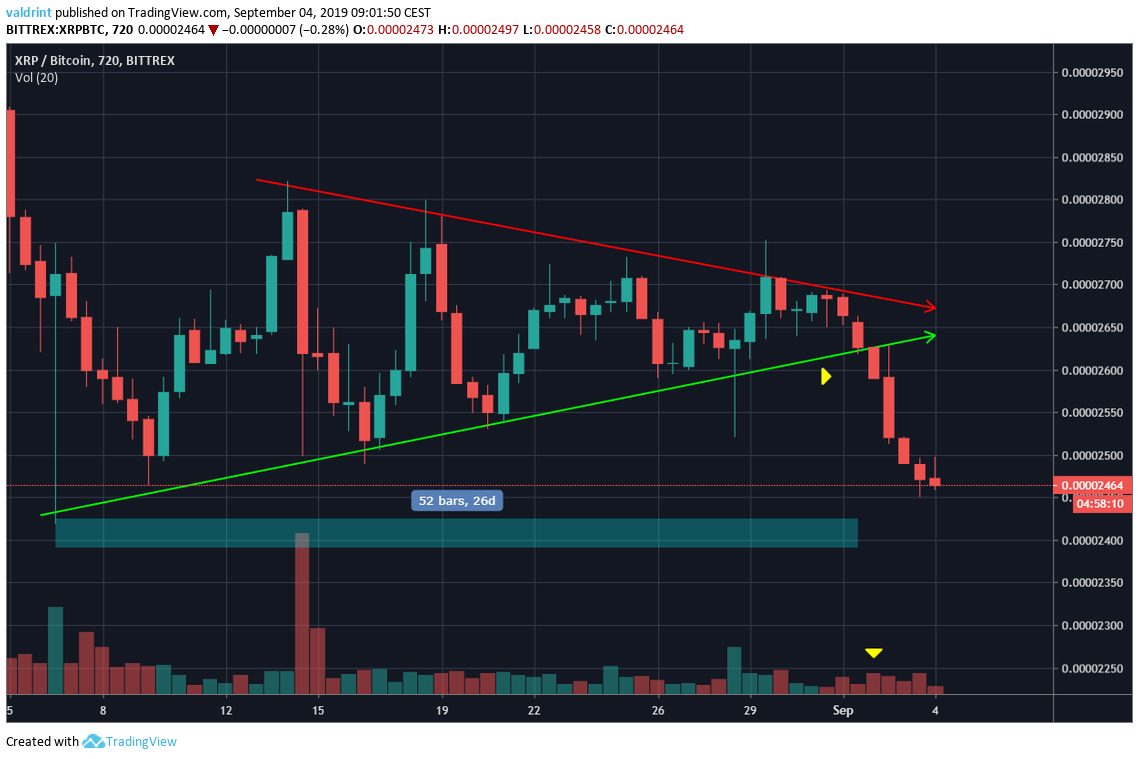 On September 2, the XRP price broke down from the triangle.

The breakdown occurred with average volume — somewhat reducing its validity.

Since then, XRP has been decreasing — reaching lows below 2500 satoshis.

A look at the daily RSI and MACD reveals a developing bullish divergence.

The divergence has been present since the initiation of the triangle. 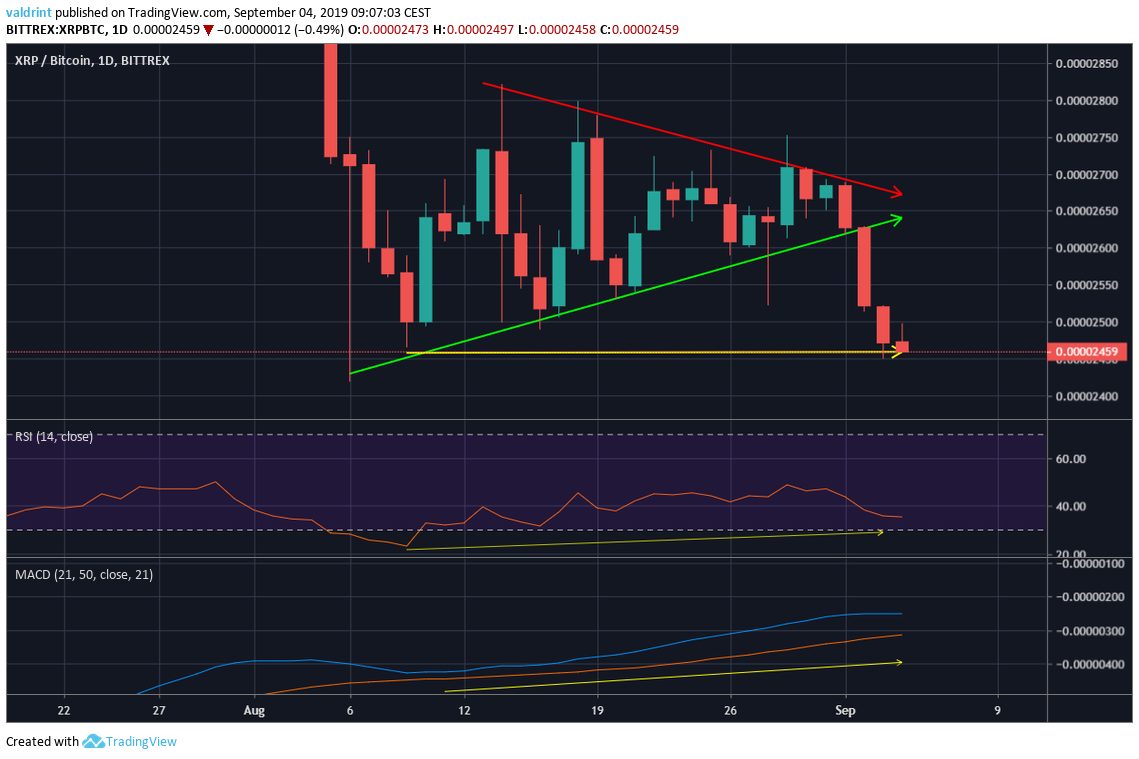 Additionally, the divergence is present in both indicators.

Looking at the XRP price movement without the now invalidated triangle, we can see that XRP may have created a double bottom pattern. 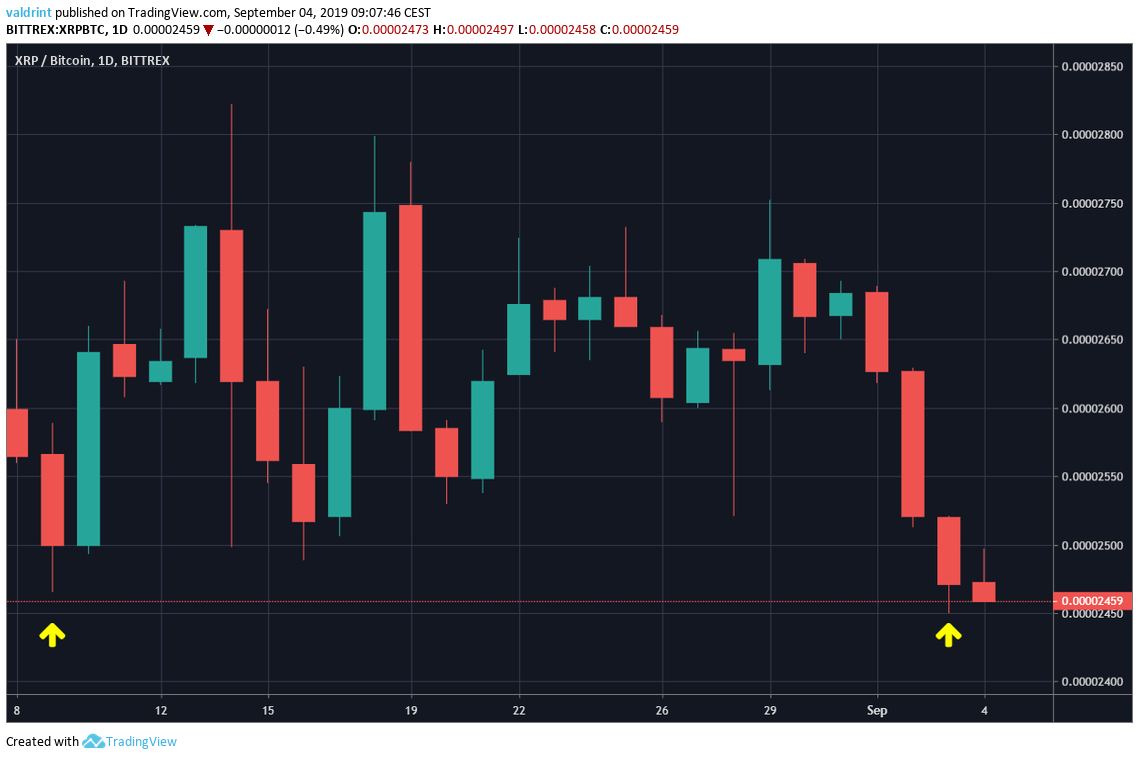 When found in a downtrend, this is considered a bullish reversal pattern.

Let’s take a look at the short-term to see if an upward movement will begin.

A look at the hourly time-frame shows additional signs of a reversal. 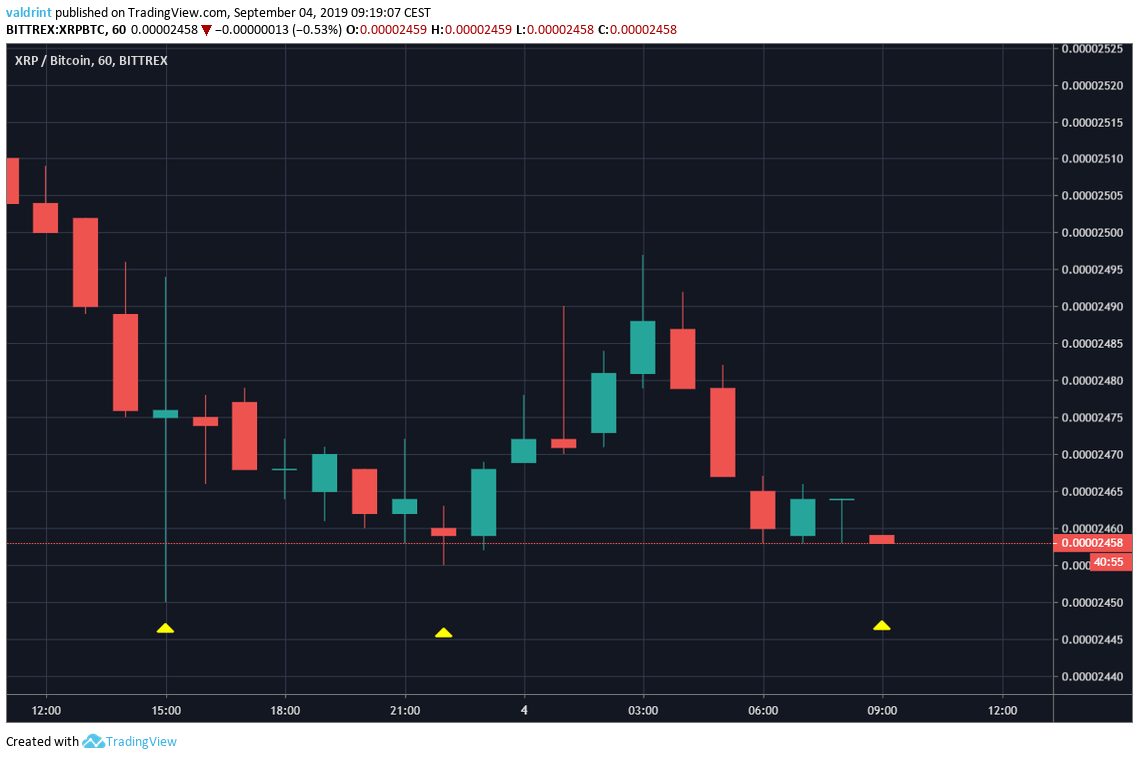 First, on September 3, XRP created a bullish doji, with the bottom of the lower wick at 2450 satoshis.

It reached the same level later that day, before initiating an upward move.

Afterward, the XRP price made a similar low for the third time.

A look at the RSI shows that, during these three almost identical lows, the RSI generated consistently higher values. 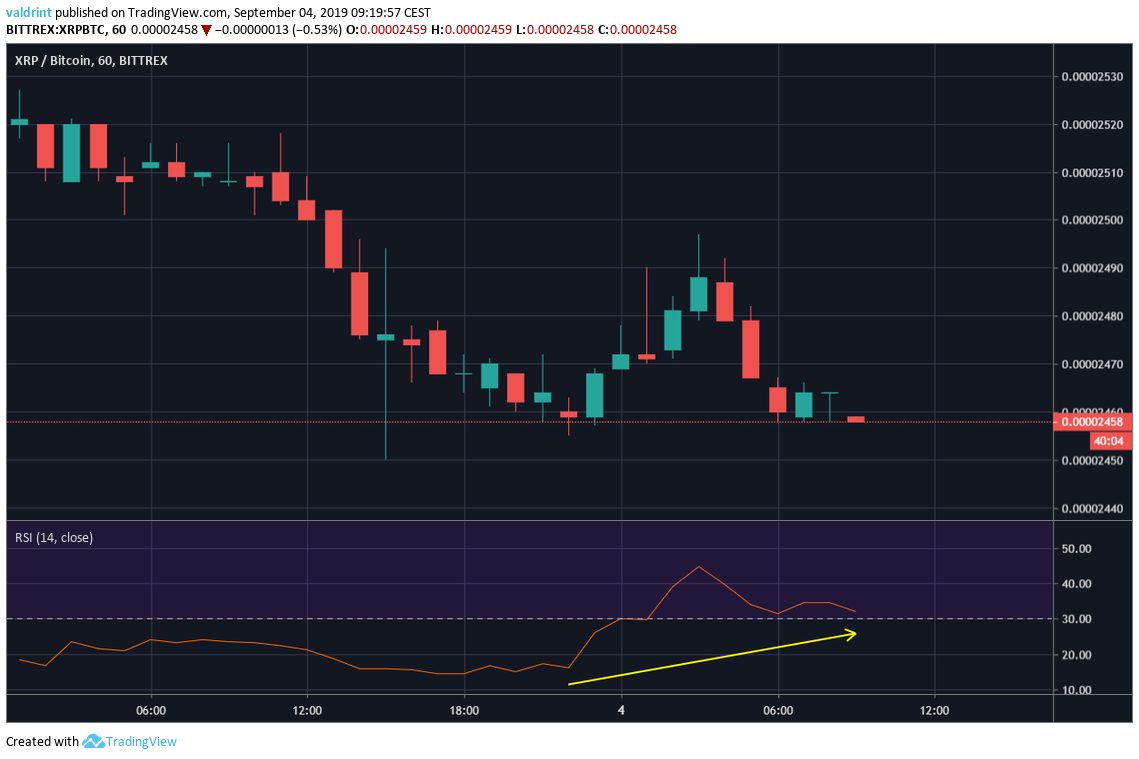 While the divergence is not very significant and only present in one indicator, when combined with our previous analysis, it makes us believe that XRP will soon begin an upward move.

If the XRP price begins to increase, one resistance area is outlined below. 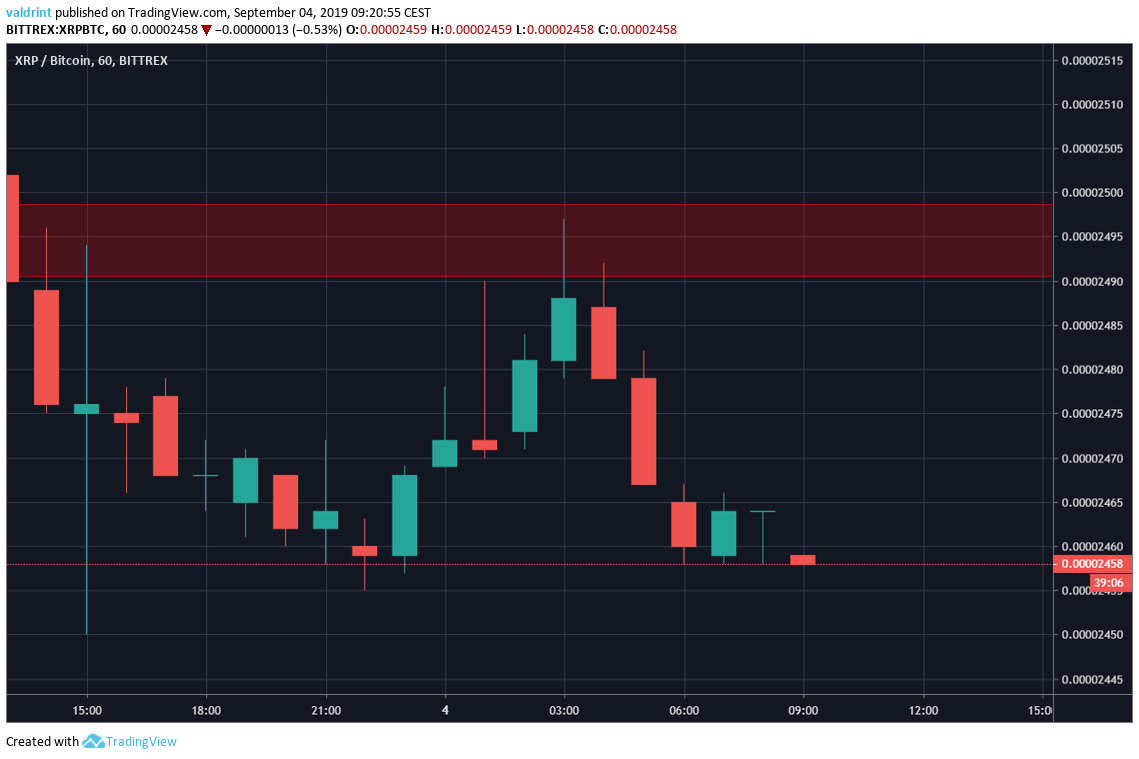 According to our analysis, XRP is likely to reach it.

The XRP price has made a double/triple bottom in both long and short-term time-frames.

According to our analysis, it is likely to soon initiate an upward move and reach the resistance area outlined above.

For trading purposes, I would consider initiating a long on XRP in short to medium-term time-frames, with the goal of locking in profits within the next 3-4 days.

The use of a stop loss below 2400 satoshis would be recommended.

Do you think XRP will begin an upward move? Let us know in the comments below.

Disclaimer: This article is not trading advice and should not be construed as such. It is for educational purposes only and represents the typical trades the author would make himself. Always consult a trained financial professional before investing in cryptocurrencies, as the market is particularly volatile.