Lunyr (LUN) is a relatively small coin. At the time of writing, it was ranked 411 by market capitalization.

However, Lunyr does have a useable platform which showcases how a decentralized encyclopedia on the blockchain may disrupt the wiki industry. This may bode well for prices in the near future.

Will the current upward trend lead Lunyr to new highs or will a crash landing bring the decentralized encyclopedia to ruin?

The price of LUN on binance was analyzed on two-hour intervals from Feb 6 to Mar 5. 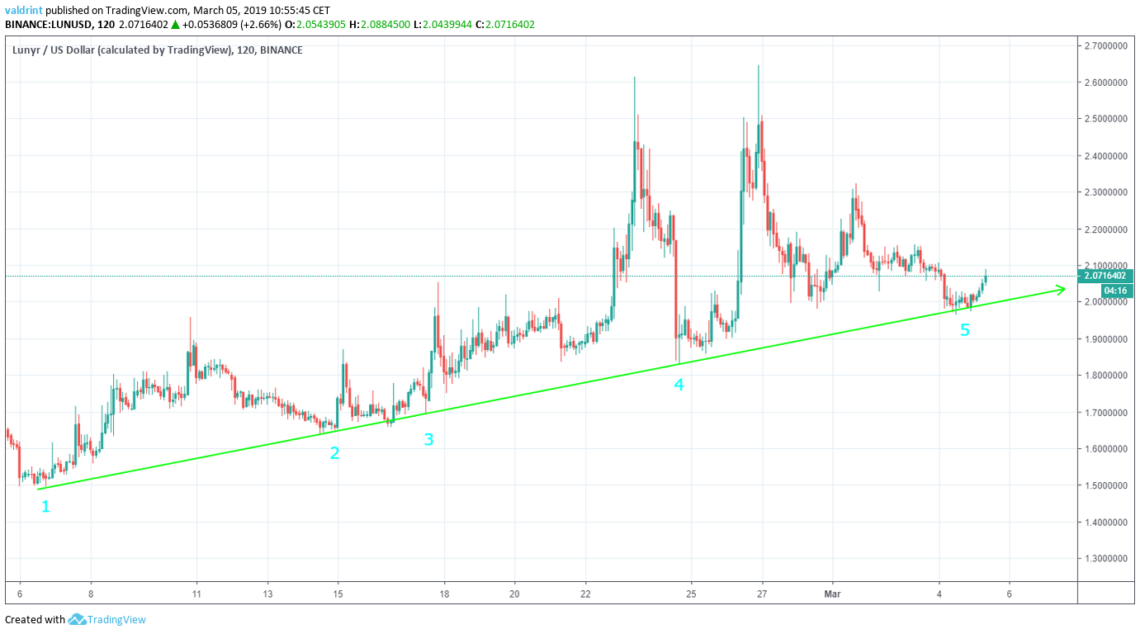 Lunyr experienced a low of $1.5 on Feb 6. A gradual rise ensued, in which price continuously made ascending lows.

Tracing the ascending highs creates the ascending support line. The number of times the line is touched and its validity have a positive correlation. The line for LUN was validated five times.

The descending resistance line is created by inverting the method used for the ascending support line. Descending highs, rather than ascending lows, are traced. 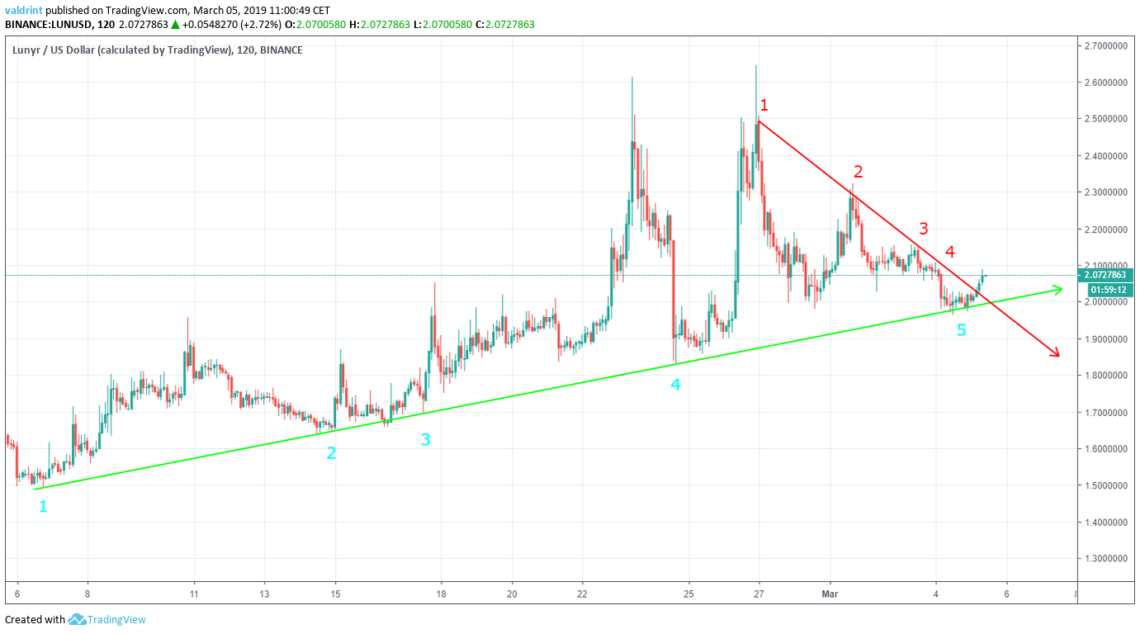 After reaching the Feb 26 high at $2.60, the price continuously generated descending highs. The line was validated four times. The price seems to be decreasing at the same rate as predicted by the descending highs.

A look at the RSI & Volume 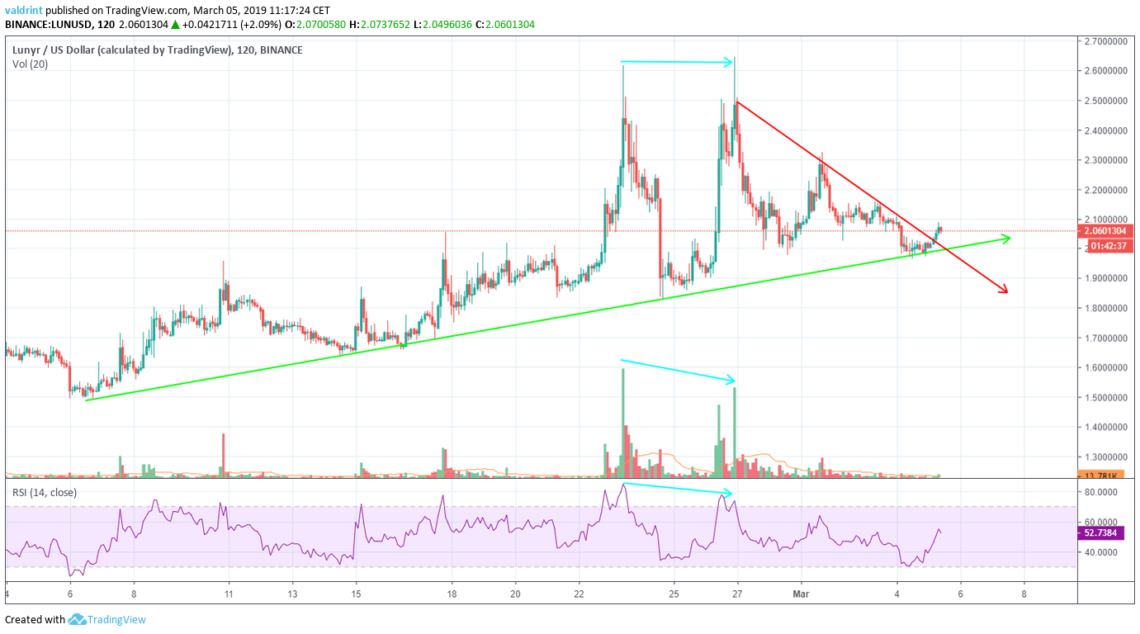 While price reached a high of on both Feb 23 and Feb 26, the RSI did not. The high on Feb 26 had a RSI level of 80, compared to 86 on Feb 23 . This is called a bearish divergence and often precedes drops in price.

Furthermore, the same divergence at the tops occurred in volume. The divergence in volume serves to add further validity to the RSI analysis.

Resistance and support areas are created when the price reaches a certain level numerous times. Resistance acts as the floor while support acts as the ceiling. Together they form a structure which is supposed to limit the scope of the price movements. 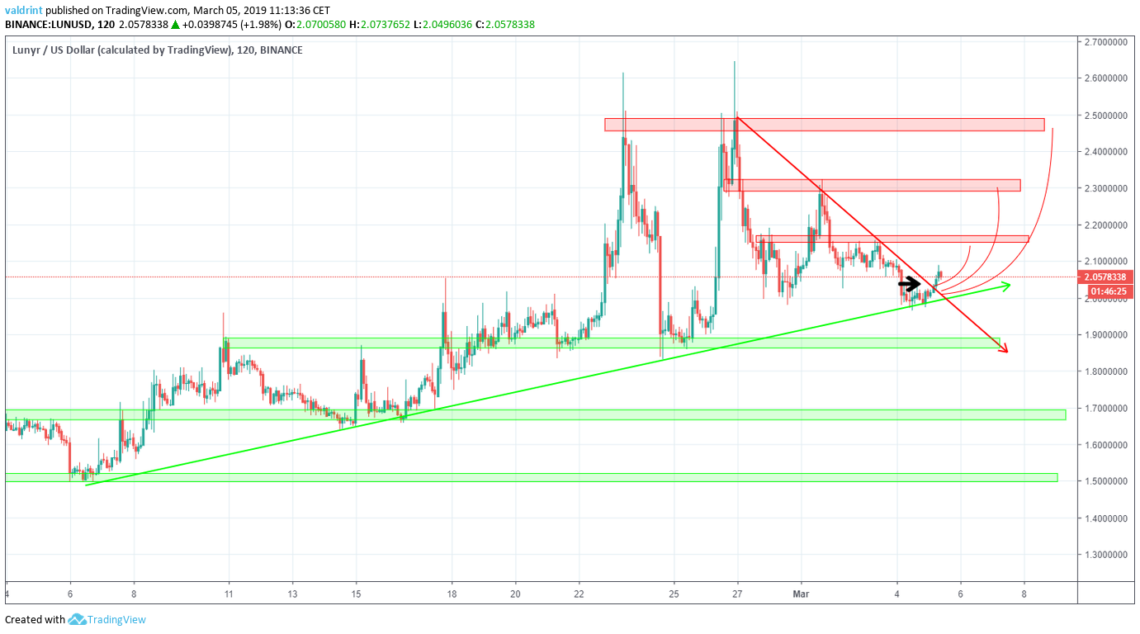 In the image above, we can see that price broke out above the descending resistance line on Mar 5. The areas outlined above (red) can be helpful in predicting where price will come to a stop.

If a breakdown were to occur, the inverse would be true, and we would be using the support areas (green) in the prediction.

In conclusion, LUN may reach the first resistance area near $2.18, before dropping back to the ascending support line.

Do you think LUN will break out above the first resistance area? Let us know what you think in the comments below! While you’re at it, check out our long-term Bitcoin (BTC) price prediction!