This week’s price movements for bitcoin (BTC), gold, and our stock picks MicroStrategy, Square, and AT&T.

Bitcoin’s struggles keep continuing. After dropping below $50,000 in light of Tesla announcing it would no longer be accepting bitcoin, the price struggled around that level the next two days, before taking another hit on May 16. At that point, it fell even lower testing support twice at $42,000, before stabilizing around $45,000.

Although BTC’s initial fall can almost certainly be attributed to Tesla CEO Elon Musk’s announcement, he is also the likely cause of its further fall on May 16. When a Twitter user speculated that Tesla would “dump the rest of their bitcoin holdings,” Musk implied that this could be the case by replying, “Indeed.”

This triggered BTC’s fall to $42,000, until Musk decided “to clarify speculation,” saying, “Tesla has not sold any bitcoin,” when it stabilized at $45,000. BTC bottoming out on May 19 is largely speculated to have been caused by Chinese authorities banning financial institutions and payment companies from providing services related to cryptocurrency transactions.

Overall, gold was fuelled by a dip in the dollar and U.S. yields as investors shrugged off the Federal Reserve’s hints on possible tapering of economic support measures.

Minutes from the Fed on May 19 were “effectively the first introduction of official talk of tapering. […] Gold is up driven by the fact that we’ve seen yields and the dollar reverse a little bit,” said Bart Melek, head of commodity strategies at TD Securities. “The view out there is though the Fed was talking about tapering, in reality, it’s very unlikely that we’re going to have an imminent reduction in monetary accommodation.”

Like most stocks strongly associated with bitcoin, MicroStrategy (MSTR) is trading similarly. Since its earning report on April 30, the stock has steadily fallen in fits and starts. From $630 on April 30, it fell to $600 by May 4, pushing back to $640 by May 5.

It struggled to maintain that level over the past week, but dropped sharply, like BTC, on May 19, to just about $400. It has recovered somewhat and is now trading around $480.

Despite bitcoin’s slide, MicroStrategy CEO Michael Saylor remains dedicated to his company’s BTC strategy. Although the gradual dip of the company’s stock can be attributed to its association with BTC, the MSTR still retains fourfold of its value a year prior. “Entities I control have now acquired 111,000 BTC and have not sold a single satoshi,” Saylor tweeted. “Bitcoin Forever.”

Similarly, Square’s (SQ) association with BTC has seen it take a hit recently. Despite gapping up to $240 after its latest earnings report on May 7, SQ has steadily fallen since then. By May 10, it was trading around $220. It subsequently fell further, and by May 13, had fallen below $200. However, it has channeled between $192 and $208 since then and is currently trading around $205.

After losing $20 million on its $220 million investment in the cryptocurrency during the first quarter of this year, Square announced that they would be halting any further purchases of BTC. Square’s CFO Amrita Ahuja told the Financial News in an interview, “We don’t have any plans at this point to make further purchases. There’s no plans at this point to re-evaluate where we are from a treasury standpoint.”

Although AT&T (T) had been rising marginally since its latest earning report on April 21, it lost those gains and more on May 17. Gapping up to $31.50 after the earnings report, it fell below $31, by April 27. However, it pushed steadily upwards from there reaching nearly $32.50 by May 6. 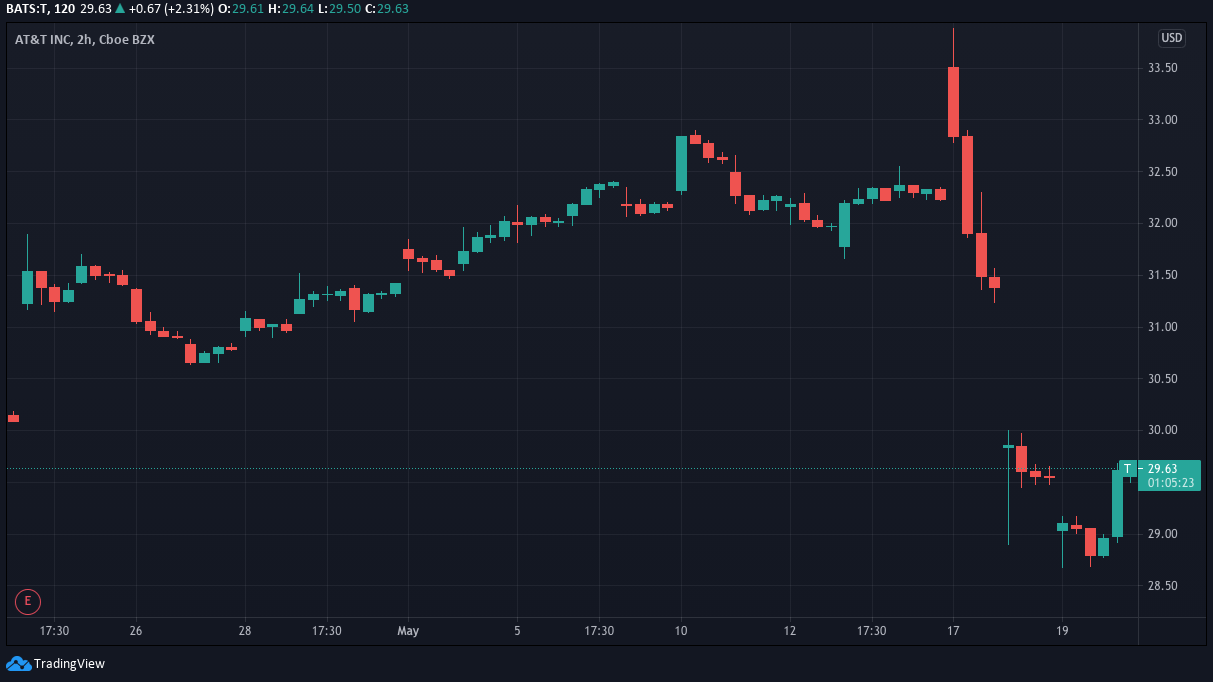 The stock sold off after AT&T announced a deal to shed its media assets, combining them with Discovery, and focus on its 5G and fiber-internet telecom core. That strategic refocus was seen as a positive by investors and analysts. However, it comes at the cost of a dividend cut after the proposed spinoff closes. The deal will provide AT&T with $43 billion in cash and other assets to pay down debt.