Leading economic indicators are pointing to disaster according to a recent report by Morgan Stanley. The banking giant released statistics showing that the U.S. and global economy are in worse shape than they were prior to the 2008 economic collapse.

The news may be cause for concern, but for many in the cryptocurrency community, it only confirms the inevitable. According to the Twitter user and cryptocurrency influencer @hodlonaut, the answer is to ‘Buy Bitcoin.’ 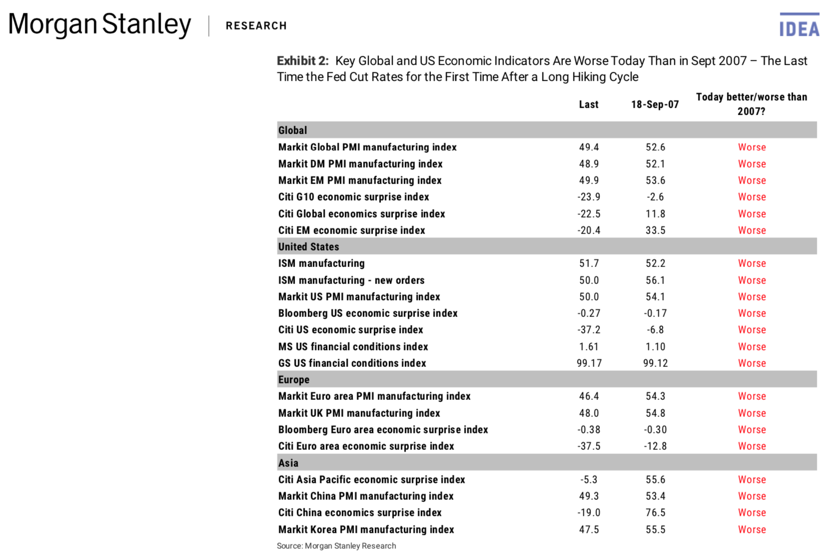 The indicators show far worse conditions than the 2007 report in every category included. Manufacturing indices and the economic surprise index were both dramatically lower than 2007 levels.

Of course, many would argue that the events that transpired in 2008 were sparked by the mortgage-backed securities bubble. Massive amounts of investments had flowed into these instruments, and their collapse devastated the economy.

Still, in 2007, only a handful of economists saw the danger that the mortgage market presented to the global economy. The coming crisis was almost entirely unprecedented, and the bubble in the market flew very much under the radar of so many who were blinded by greed.

The answer, according to cryptocurrency faithful, is to buy Bitcoin (BTC). The digital currency is not connected to the global economic influencers in government. As such it is able to move independently of these institutions.

Similar to gold, Bitcoin can function as a semi-stable asset that provides a hedge against the impact of government currency manipulations. As the global economy moves in a negative direction, Bitcoin may find itself in a strong buy cycle.

Additionally, Bitcoin is functionally more useful than gold. As a payment method, gold is extremely cumbersome. Bitcoin, however, is digital and therefore simple to use, making it function both as a hedge and as a payment method simultaneously.

Think the economy is teetering on the brink of collapse like 2008, and that Bitcoin will be the go-to hedge in the next economic crisis? Let us know in the comments below!

Bitcoin ETF in a Year? Analyst Claims Grayscale on Track to Launch First