Dogecoin was first launched on Dec 6, 2013. Since then, it has been the subject of a remarkable rise to prominence. It was created by Jackson Palmer and Billy Markus, based on the Shiba Inu meme.

Even though the cryptocurrency was not taken seriously at its inception, Dogecoin has developed into an important asset, having a market capitalization of $283 million as of October 2019, and ranked 29th based on its market cap.

Additionally, Dogecoin enjoys some real-world applications and is sometimes used for tipping on the internet to reward helpful posts

After climbing to its all-time high value of over $0.0185 back in January of 2018, Dogecoin began to experience a downtrend that lasted until January 2019.

Nevertheless, Dogecoin remains a cryptocurrency with significant appeal and appears unlikely to disappear in the near future. Taking that into consideration, let’s take a look at the current state of its price movement and look ahead to its potentially bright future.

During its history, Dogecoin has reached several significant highs and lows, some of which will be used in this analysis.

The most significant are given in the table below:

Looking at the price of Dogecoin since its inception, we can see a very interesting trend line that has been in place since the beginning of 2015. 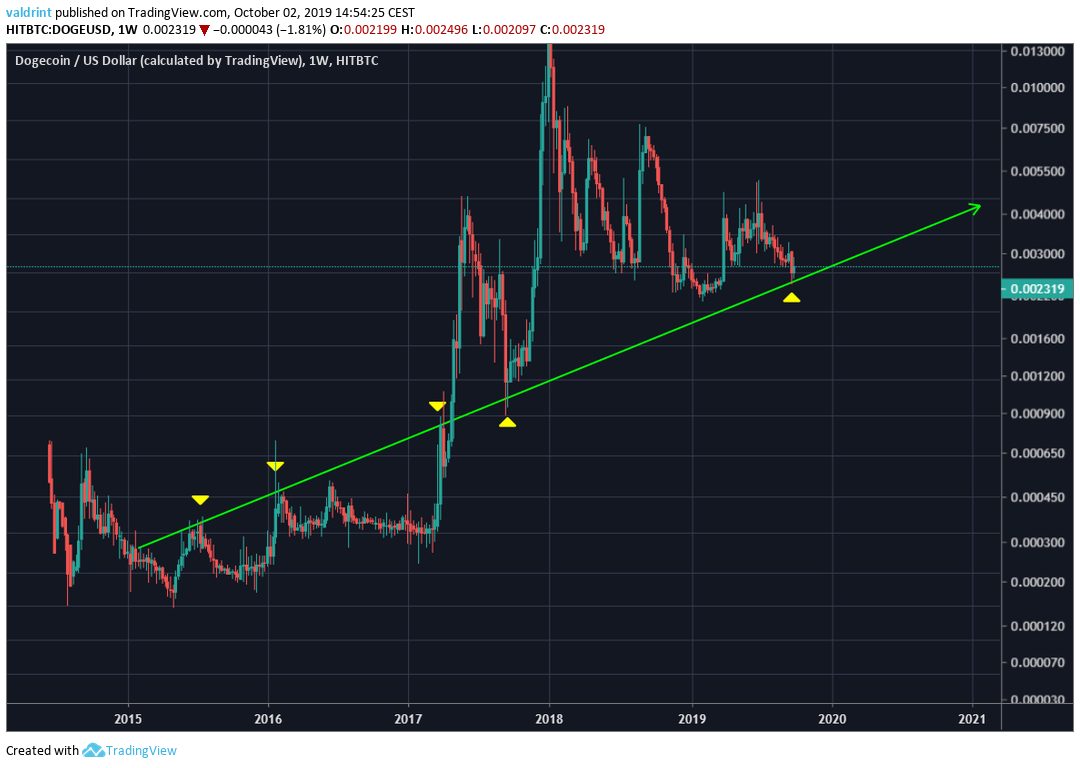 We can use this line to measure the average rate of increase. However, it would not be accurate in predicting the price on an exact date, since we cannot know how far the price is from the support/resistance line.

A slightly better way to measure the price at a certain date would be using the average rate of increase. 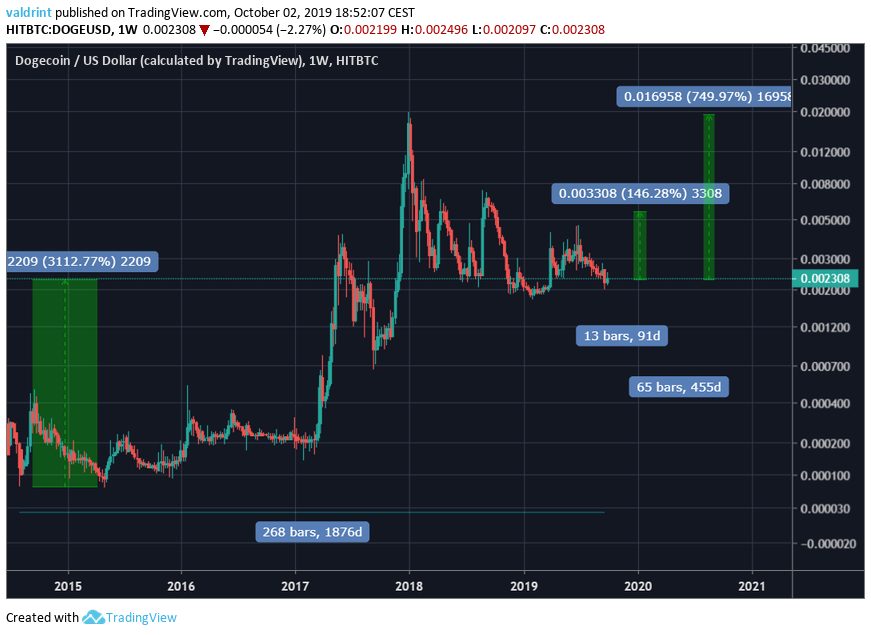 However, there are several drawbacks to using this method.

Since the price of DOGE has been historically volatile, we cannot determine how much faster or slower than its average rate DOGE will be at an exact point in time.

However, this method might be suitable for predicting the price in 2024, since it should return to the average rate of increase at some point in time.

Therefore, we will use technical indicators and fractals in order to predict the price and then check with these predictions to see if they support them.

In order to predict the price at the end of 2019 and 2020, we want to find similarities between price movement at certain points in time.

Doing that we have identified nine instances in which the daily RSI was below 30. A low RSI value indicates oversold conditions. 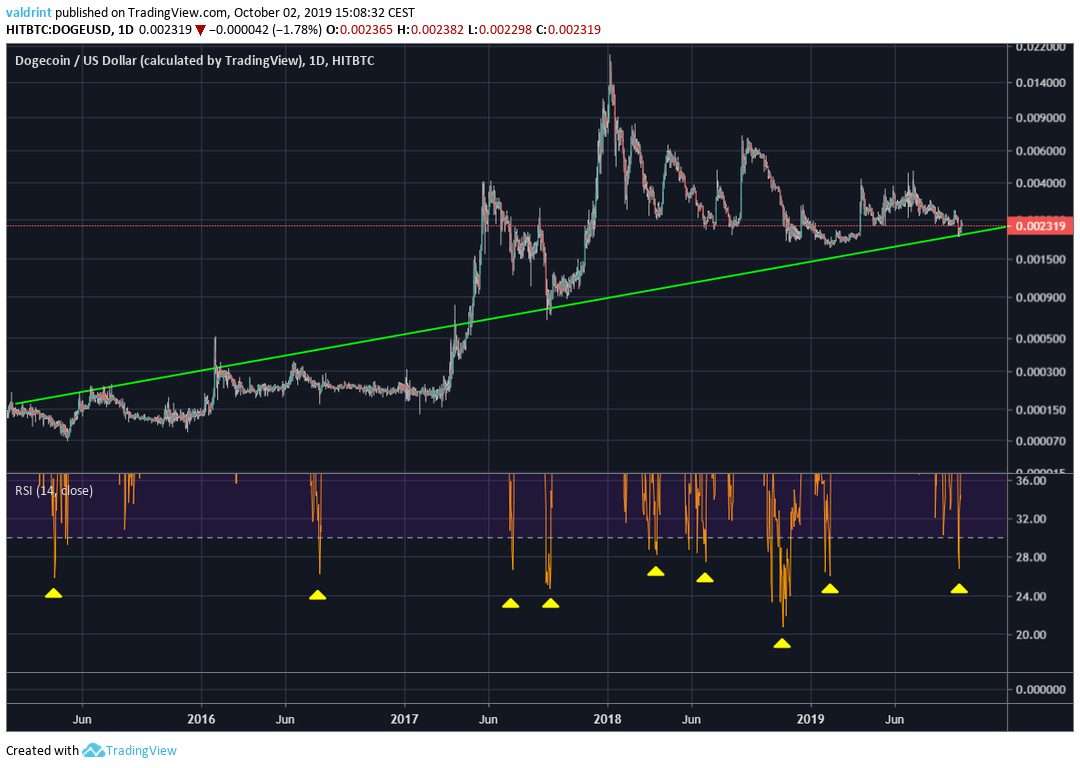 Therefore, we have added the 100 and 200-day moving averages (MA, yellow and blue) into the analysis. 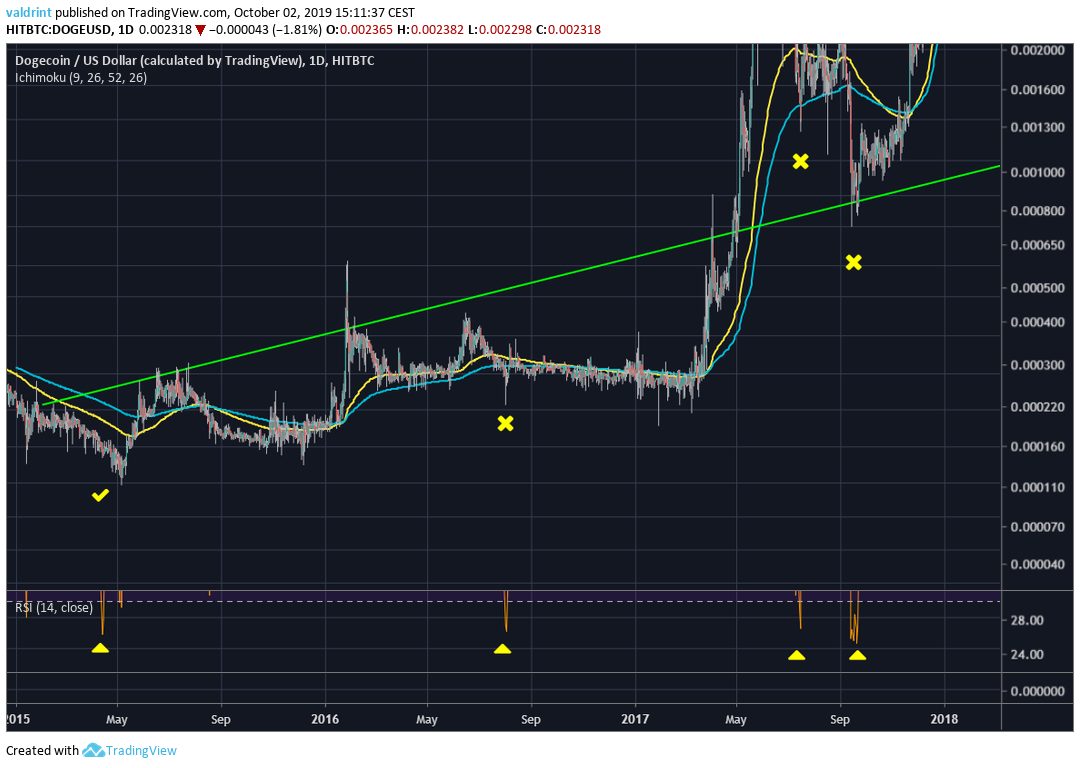 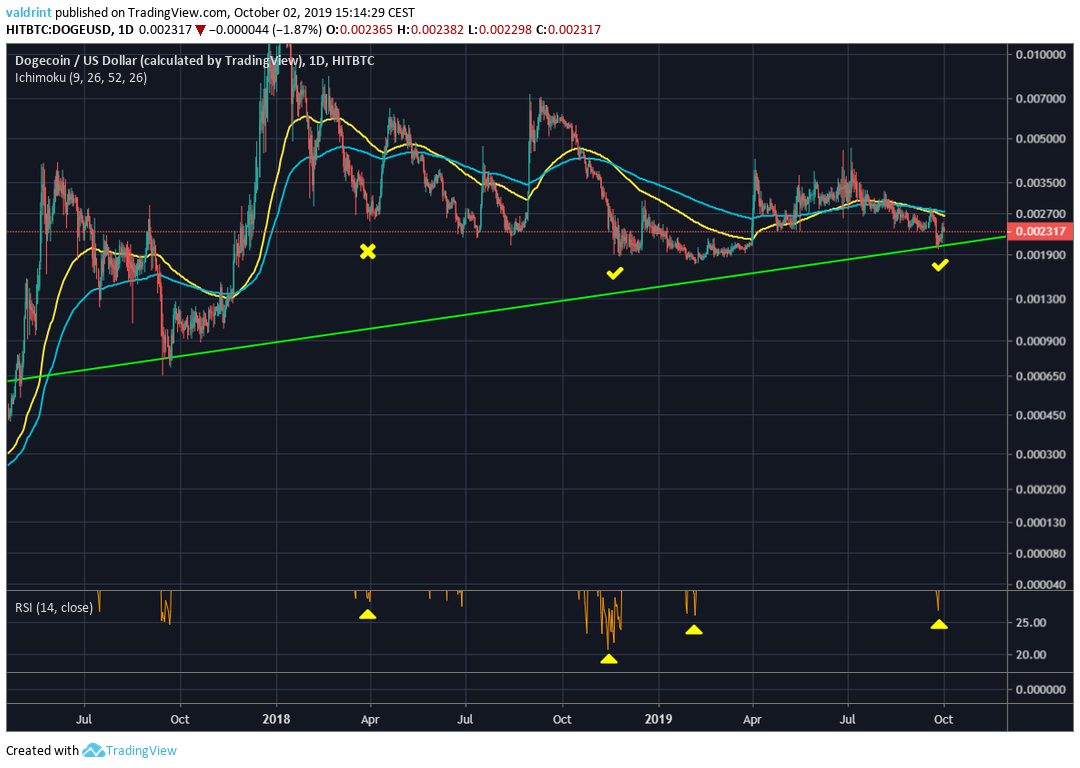 Doing so, we find only three instances that fit our criteria:

Assuming that the price is at a similar place in its market cycle during these dates, we are going to make predictions for the price on a date in the future. 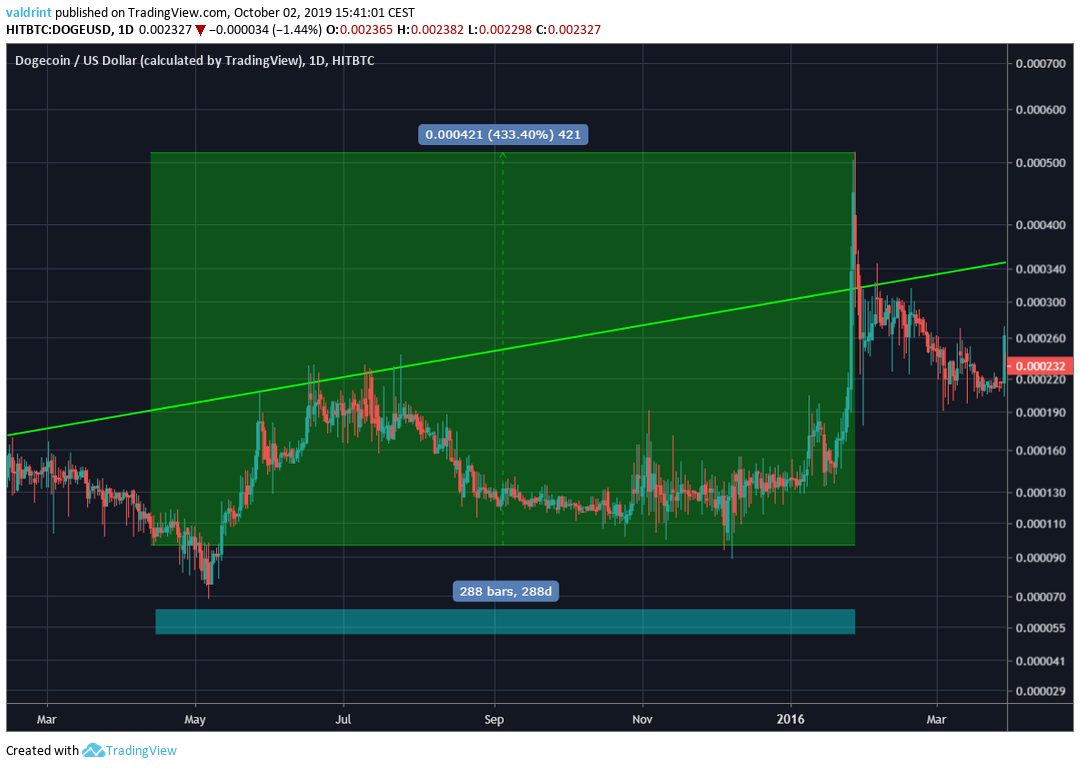 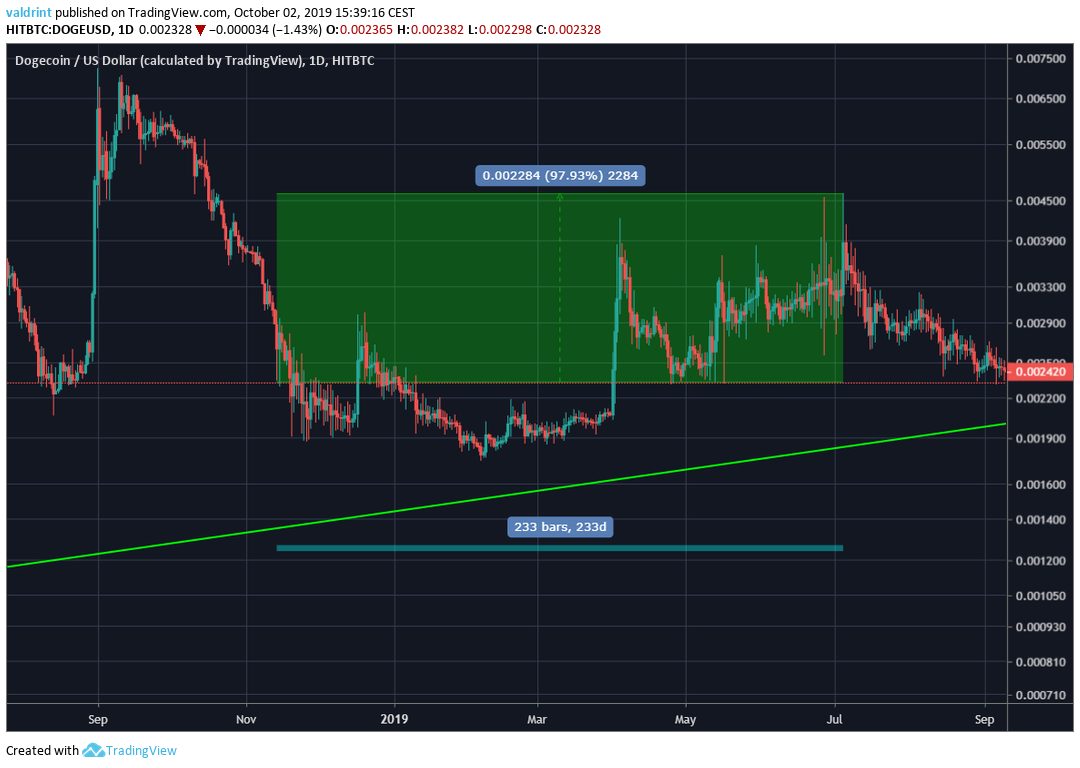 Therefore, comparing the ratios of these two moves, we realize that the second is faster, transpiring 1.25 times quicker than the first. However, it has a much smaller magnitude of only 22% of the first move.

Assuming that a similar movement will occur after the Sept 25, 2019 low, the price should gradually increase for the next 250 days amounting to a total increase anywhere between 100% and 400%.

This does not nullify our hypothesis that a move similar to the one in April 2015 and Nov 2018 will occur soon. Rather, it suggests that the move beginning in Nov 2018 has not yet finished and we are approaching its final phase.

This means that we could see the price consolidate close to the support line for a period of time before beginning a very rapid upward move. 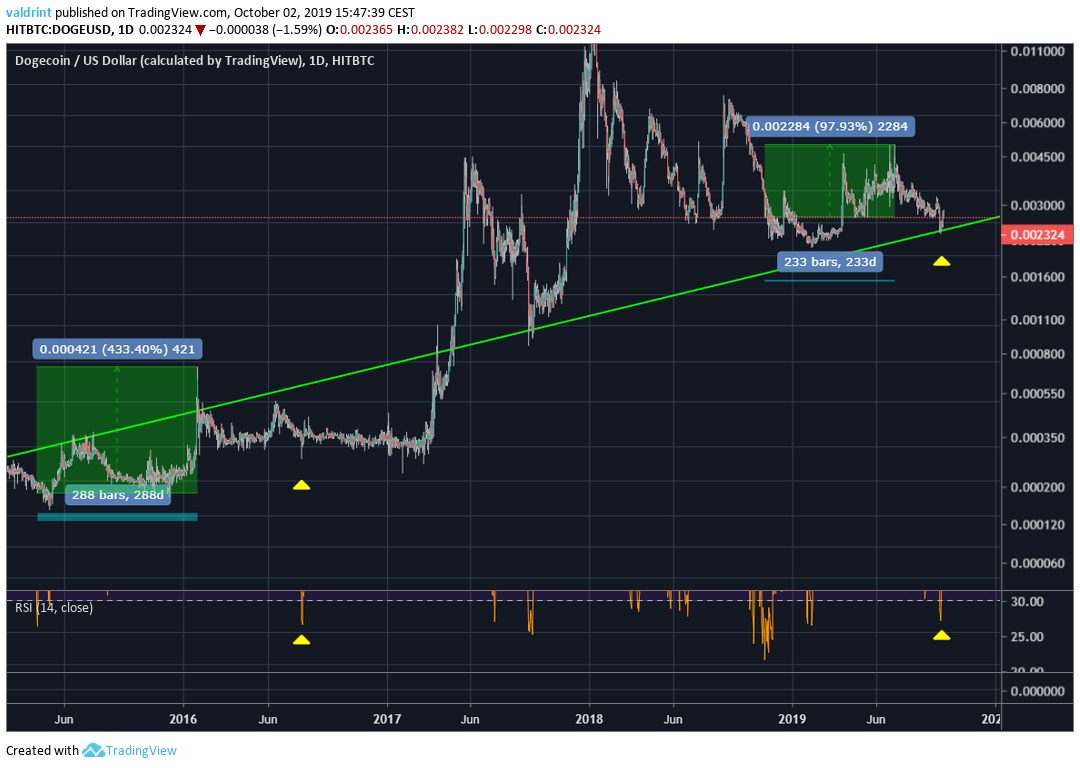 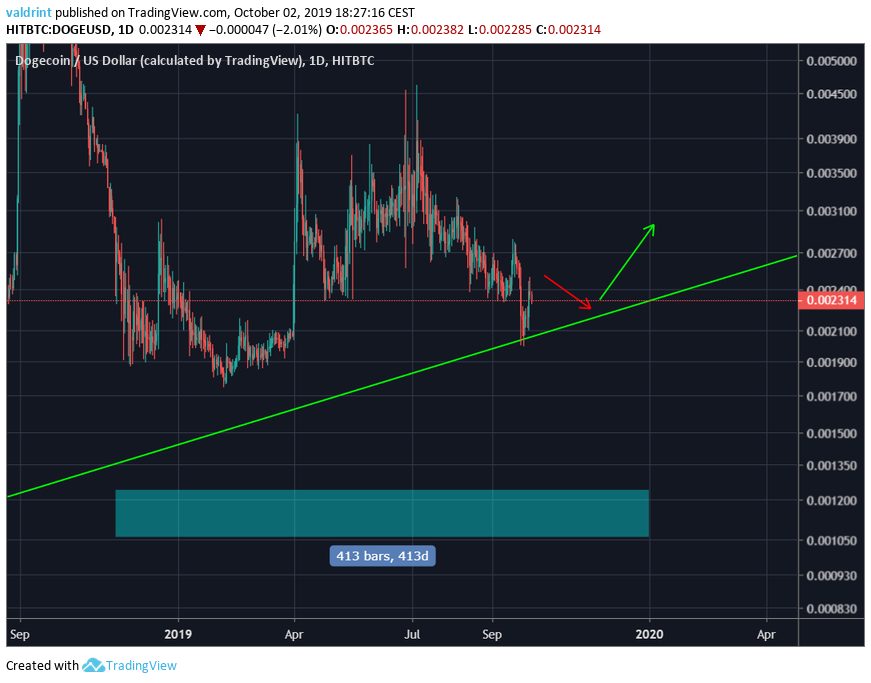 The $0.00297 price does not fit with our prediction based on the average rate of increase.

This is to be expected since it is a relatively short-term prediction.

However, it fits perfectly well with the hypothesis that the price is likely to consolidate near the support line before beginning a rapid upward move.

We are Nearing the end of 2019, this rapid upward move has yet to begin.

The price should consolidate until July 2020, when it should accelerate its rate of increase and reach a double top near the all-time high price. 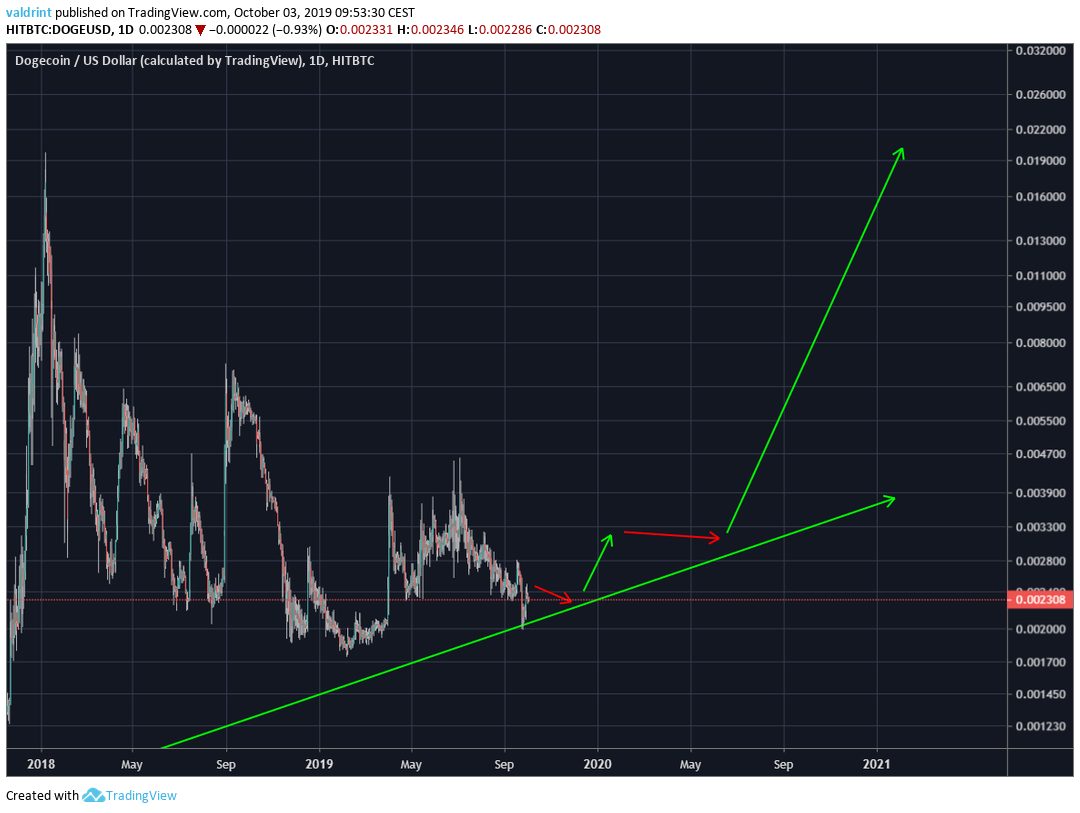 In order to predict the price at the end of 2024, it is not possible to use the RSI or moving averages.

This is because the date is close to five years from now, and both our market cycles (April 2015, November 2018) lasted only for roughly one and a half years. Thus, if we were to use them to predict the price, we would have to do a prediction based on a projected price in the future.

Therefore, we will use the average rate of increase discussed in the first section. 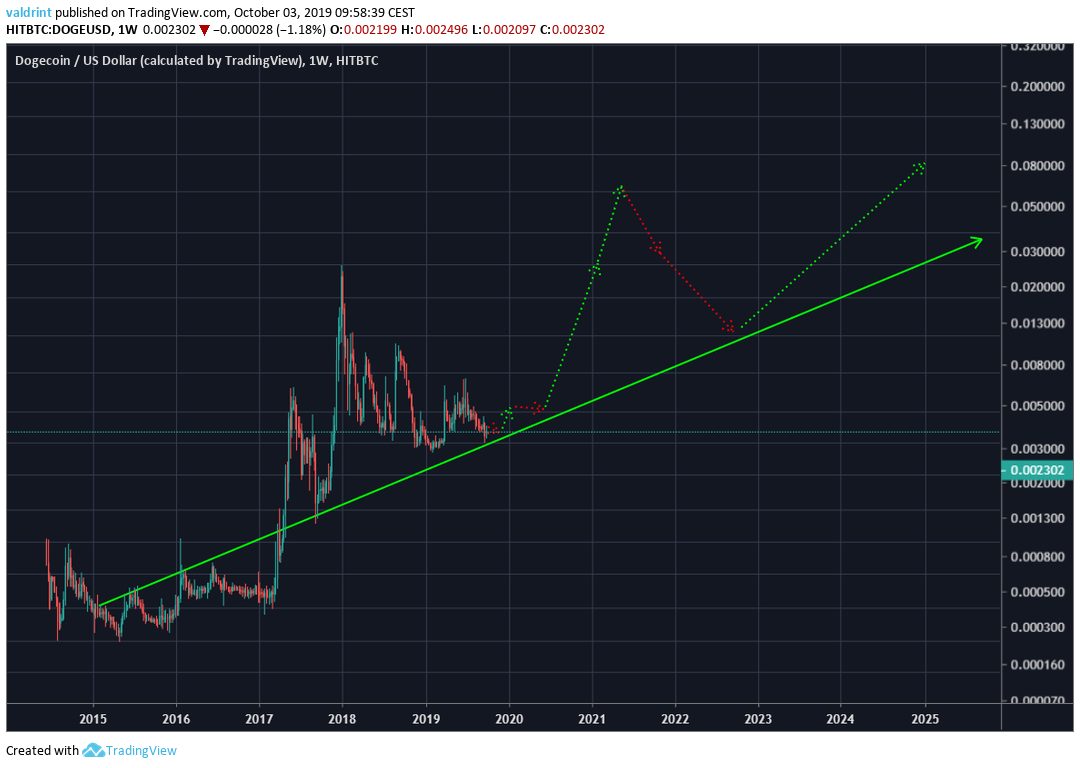 The predicted prices with both methods are given in full in the table below:

On the other hand, both price predictions for the end of 2020 are quite similar.

The price prediction for 2024 is done using the average rate of increase.

Do you think our predictions are accurate? Which one of them is more likely to be reached? Do you like the methods using to come to the predictions? Let us know your thoughts in the comments below.