Bitcoin Breaks Out Above Resistance — Is $8,000 Just Around the Corner?
#
Home News Regulation News

BUY NOW. This brings the total number of those suffering ill effects from the unregulated products to almost 1,300 — which are mostly isolated to the United States.

The bans follow statements from President Donald Trump urging the FDA to take action at the federal level. In September, he warned against flavored electronic cigarette products being alluring to children and a potential health risk to users.

However, there seems to be more to the story than immediately meets the eye. Whilst the American press delights in parading those whose health has been impacted negatively by vaping products across its front pages, elsewhere, there have been few, if any, incidents associated with the tobacco alternative.

In the United Kingdom, for example, an independent report into the health implications of using electronic cigarettes claims that vaping is “at least 95 percent less harmful” than smoking. The report, published by Public Health England, also states that the products are helping as many as 20,000 individuals quit smoking each year and numbers of smoking-related deaths are down considerably as a result. Around 3 million U.K. citizens reportedly use electronic cigarettes as an alternative to smoking.

In the U.K., all products — the devices themselves and the liquids used with them — are regulated by the Tobacco Products Directive. Shops are visited regularly by mystery shoppers to safeguard against underage use and to inspect the quality of the products sold. Liquids must use only food or pharmaceutical-grade vegetable glycerin or propylene glycol. Meanwhile, most of the stories featured in the U.S. press revolve around completely unregulated cannabis vaping products that use vitamin E acetate, an oil that experts say is harmful and should never be vaped.

Vaping, the Dark Web, and Bitcoin

The latest U.S. example being used to pedal the narrative that vaping is dangerous by default was recently published by the New York Times. It recounts the story of a 22-year-old college student who was a heavy user of unregulated THC vaping products ordered from the dark web using Bitcoin.

He explored the dark web to find THC and paid for it in Bitcoin. Soon he was vaping almost constantly. It nearly killed him. https://t.co/YEv8HEUe29

Gregory Rodriguez’s story, although upsetting and particularly harrowing, has little to do with vaping and a lot to do with its prohibition. Annette Sheard, the owner of The Vapery in Liverpool, England, provided BeInCrypto with an exclusive comment about the situation in the United States:

It’s crazy. 46 of the American states take money from the big tobacco companies, New York included. They’ve used this as a tool to scare people into quitting vaping. These illegal THC cartridges have been mixed with vitamin E acetate, which is an oil, and oil should never be vaped. Regular, legal vaping liquids are mixed with food-grade flavourings, as well as vegetable glycerin and propylene glycol (the mist from an inhaler without the medication), which are pharmaceutical grade and completely safe for consumption. America wants people to see vaping as harmful, as well as THC, when, in reality, it’s the oil that it was mixed with that’s caused people to fall ill.

Tobacco companies have long lent the US government their support to the tune of millions. In fact, from the very first day of the Trump administration, cash was rolling in from the industry. According to a report in The Guardian, the largest cigarette manufacturer in the U.S., Reynolds American and Altria Group, donated $1.5 million just for a presidential inauguration party. 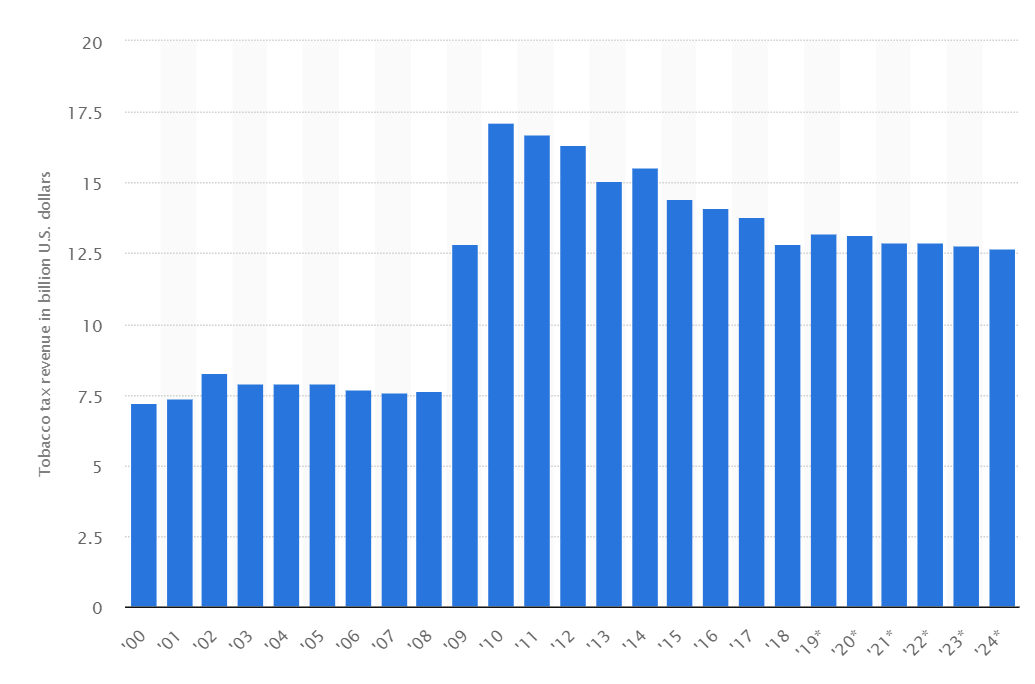 Clearly, vaping is a threat to the tobacco industry’s business model. Last year, Altria snapped up a 35 percent stake in the leading e-cigarette brand, Juul, in a clear case of ‘if you can’t beat them, join them.’

Evidently, there is something not quite adding up. Vast numbers of individuals are falling sick and, in some cases, dying in the U.S. from something that U.K. health officials are praising as an effective means to prevent lung disease caused by smoking tobacco.

The United States government generates billions in taxes from the big tobacco companies and regularly receives extra kickbacks from the industry’s Washington lobby. With smokers increasingly turning to vaping products, could the snail’s pace movement towards regulation and the recent offensive be an effort to protect the behemoth of an industry against the competition?

Do you think there is some larger agenda against vaping and/or THC products in the U.S.? Leave your thoughts below.