Bitcoin Decouples From Markets as Gold Disappoints Amid Coronavirus Fears

Gold has been dropping amid fears that the coronavirus could cause supply shocks and become a worldwide pandemic. Bitcoin

BUY NOW, on the other hand, has effectively ‘decoupled’ from the rest of the markets.

Gold is often touted as the ‘safe haven’ in times of global crisis. However, right when it was its moment to shine, gold has faltered and fallen like the rest of the markets. 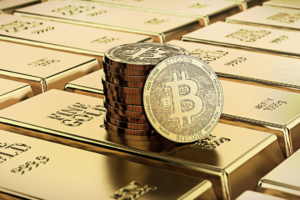 Is It Really a Hedge?

The majority of cryptocurrency assets, along with the entire global financial sector have taken a sizeable hit in the last... More. According to common wisdom, gold should be rising during this period – but it’s not.

Gold was trading for $1,682 per ounce on Feb. 24, according to Bullion Vault. However, it has sunk since then to $1,585 per ounce. Although such a drop is not drastic for cryptocurrency markets, it is a significant drop-off for the stable precious metal. When placed on the monthly chart, the dip seems significant. 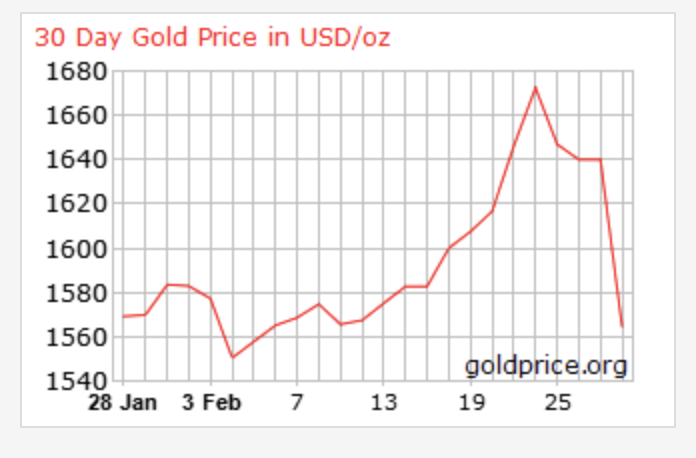 The drop-off has caused some gold bugs to go into damage control. Known Bitcoin hater Peter Schiff told his followers to “buy the dip” because gold is still up more than 6.5% this year. Many were quick to point out, however, that gold has recently failed to do the one thing its advocates claim it does: be a global safe haven during times of crisis.

Peter, you said over and over that when the stock market goes down people will pile into gold stocks. It’s not happening and I don’t hear a valid reason why

Most people who know anything about the economy have heard the word inflation. It is usually thrown around as a... More issues. As of now, it seems that gold will continue to slide further downward.

The reason is simple. This is NOT a liquidity problem. We are facing another supply chain crisis, NOT an inflationary crisis. Remember in 2008, gold FELL to $680. This is a trade problem.

Gold is worth less than food and bullets at some point. Read the history of any seige.

Bitcoin’s Moment to Prove Itself Is Here

Although some gold bugs are quick to disparage Bitcoin, the leading cryptocurrency has many advantages over gold. For example, gold ownership still relies on transport, which is susceptible to supply shocks. Bitcoin, on the other hand, is, of course, all digital. This means that in times of global panic, it can’t be held hostage by suppliers and transport.

Bitcoin has not been immune to the global rout, either. However, by most metrics, it seems to be ‘doing its own thing,’ as one analyst put it. In fact, Bitcoin seems to be largely decoupled from expected correlations with global risk as of late, which is strange. Investors are still split on whether Bitcoin will prove to be a better hedge than gold, with some claiming it is a better play for the long-term.

Still, Bitcoin has consistently produced better returns than gold ever has. However, the two cannot be separated entirely. Once Bitcoin matures and stabilizes someday, its price movements will resemble gold. Indeed, even today some claim that we can chart Bitcoin’s future moves through gold fractals.

In short, gold is performing poorly as a hedge – and this is Bitcoin’s moment to prove itself.

Cryptocurrency News Roundup for May 14, 2020
#News 3 weeks ago
Up Next
Dash Bounces at Its 100-Day Moving Average
Altcoin Analysis 3 months ago
Related News