A Cryptocurrency trading analyst is being accused of photoshopping his positions on multiple occasions to make his gains seem larger.

You have likely heard of Jacob Canfield if you frequent any cryptocurrency trading channels or circles. Often self-styled as the ‘#1 cryptocurrency analyst,’ he has now been caught posting photoshopped positions.

A recent collection of screenshots provides proof that a top trader was photoshopping his gains to misleadingly boost his reputation. The images were recently tweeted by King (@Trapouts) who posted screenshots of fabricated numbers. He goes on to call Jacob Canfield a ‘scam.’

In one instance, Canfield photoshopped 7 BTC in profit to 15 BTC. It’s claimed that there are over 10+ major positioned photoshopped by Canfield to exaggerate his earnings.

Well @JacobCanfield is telling people that since I caught him posting 10+ photoshopped positions that it was “early on in his twitter career.”

He posted this literally yesterday.

Further, anyone who was doing analysis for him is not a scam. This guy is though. pic.twitter.com/J3mbmHV1xz

Canfield makes money off paid subscribers, who believe he is a top-trader and they go to him for advice. His Twitter account once promoted himself as the “#1 Ranked Bitcoin

BUY NOW Analyst” and as a “Guest Trader on Forbes and CNBC.” This, however, has now been changed to “I use trend forecasting, data and research to trade the markets.”

"#1 Ranked Bitcoin Analyst" and Chiropractor @JacobCanfield aka https://t.co/Xg1SqyEE8v is as we suspected, a Photoshopper/Fraudster while busily collecting subscribers hard-earned money

Subs should demand their money back and/or contact @SEC_Enforcement #btc #crypto pic.twitter.com/VZ9FVA3lb0

BeInCrypto has reached out to Jacob Canfield for a comment but he has declined to respond.

Although Canfield did not present BeInCrypto with a statement, he did issue one to his many followers in an attempt to explain himself.

He says that moving forward he will be doing ‘live video trading‘ for all his trades. He did not apologize for any wrongdoing and instead blamed the mob mentality which “is strong on Twitter.” He claims he was prevented from telling his side of the story and that everything has been blown out of proportion.

The only thing I can do is be the most transparent trader on Twitter.

If you see someone claiming to make a trade, have them show you video proof.

That is what I will be doing from here on out.

However, it should be noted that Canfield did initially post an apology which he has since deleted. In it, he admits to photoshopping and says ‘it will never happen again.’ He claims he simply did it to ‘chase clout.’ 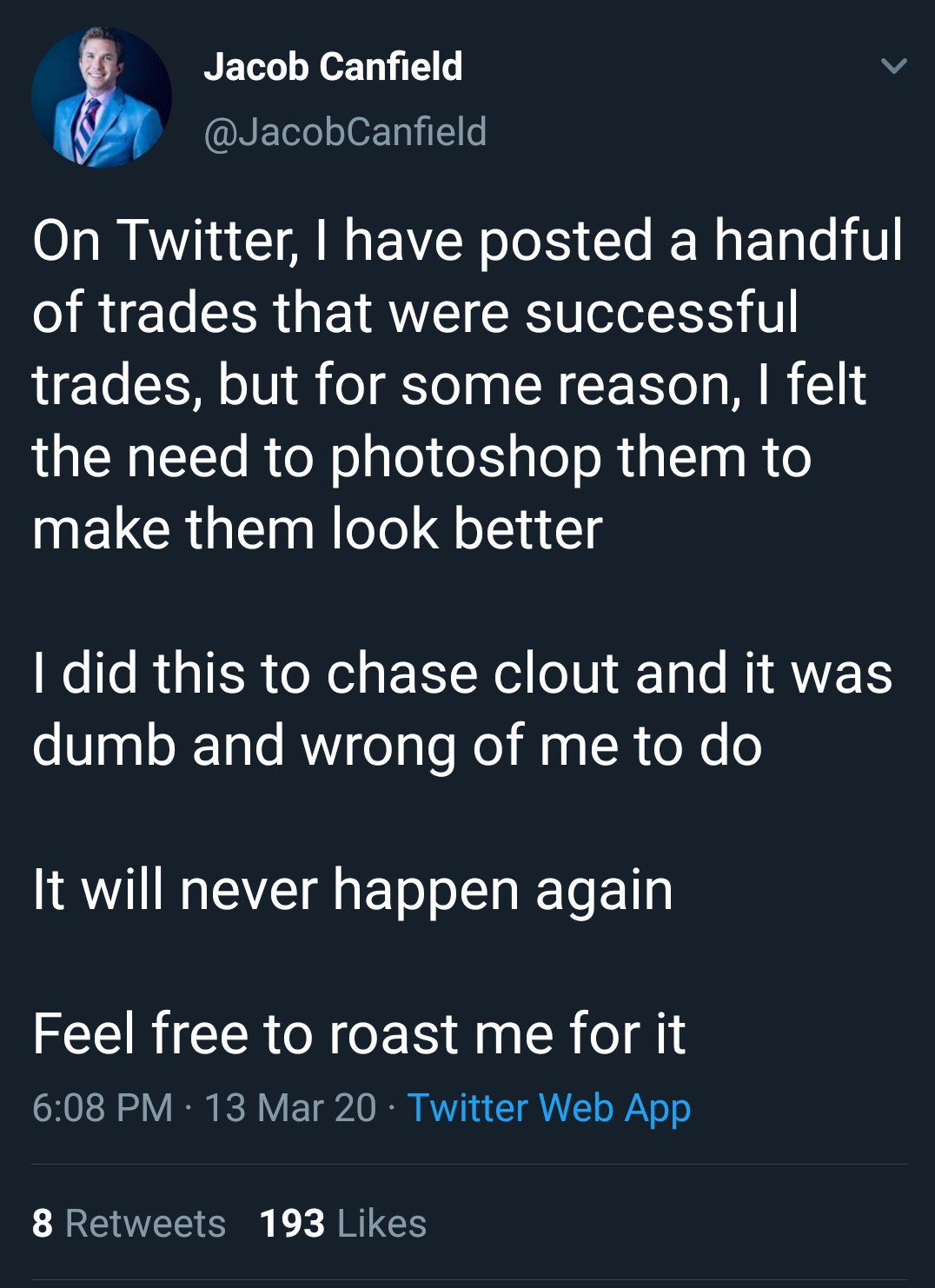 The responses to Canfield’s reply were largely negative and disparaging towards his efforts at reconciliation.

Here at BeInCrypto, we have cited Canfield in the past. He is the leading proponent of counter-trading CNBC’s calls. It’s been a worthwhile strategy for many, funny enough. However, the recent controversy has cast a dark shadow over his reputation. Frankly, it’s a shame given his knowledgeable background.

The cryptocurrency market is awash with traders who claim to have the magic formula and can read markets. While it is undeniable that Canfield has significant experience trading cryptocurrencies, his photoshopping of trades is simply unacceptable. There is already a crisis of trust in the blockchain industry and we don’t need to add to it.

Overall, it’s a shame to see this happen and only further damages the reputation of the industry in this difficult time. However, the hard truth is always better than not knowing it at all. Traders are encouraged to take note of Canfield’s past and come to their own conclusions.

90 Percent of Cryptocurrency Firms May Be Bankrupt in Six Months: Swiss Blockchain Federation
#Companies News 4 weeks ago
Up Next
Even Tyler Winklevoss Is Backtracking on Bitcoin as 'Digital Gold'
Bitcoin News 3 months ago
Related News